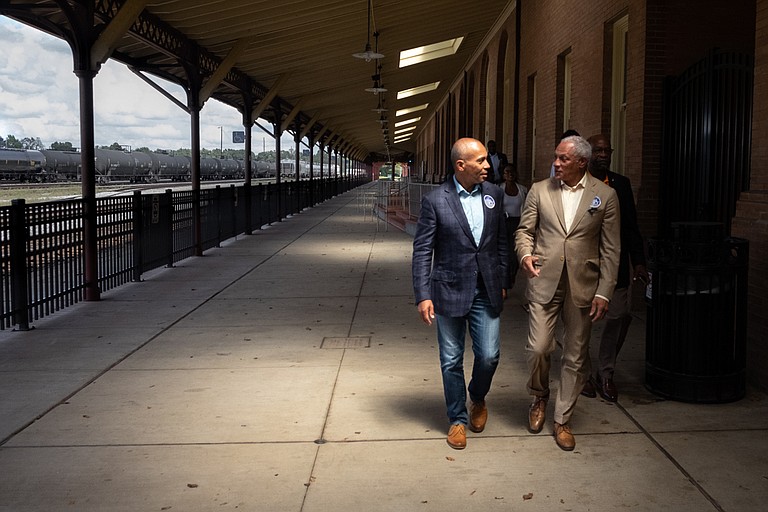 Espy, who served as U.S. secretary of agriculture from 1993 to 1994 under President Bill Clinton, is running for the seat Republican U.S. Senator Cindy Hyde-Smith currently holds. Mississippi Gov. Phil Bryant appointed her to that seat in April after longtime Sen. Thad Cochran retired for health reasons.

Patrick, who also served in the Clinton administration as assistant attorney general overseeing the civil-rights division of the U.S. Justice Department, said he came in part to repay Espy for “the encouragement he gave” him, but also because “we need in Washington his willingness to listen.”

At the press conference, Patrick lamented the current state of politics.

“We have a whole lot of people in politics today, or who aspire to politics today, who bring division and fear, who bring all kinds of painful rhetoric, all kinds of reasons to turn on each other,” Patrick said. “We need Mike Espy because he encourages us to turn to each other. He encourages us to understand that we have a stake in each other. And that is the first step in solving problems.”

Espy and Hyde-Smith’s other Republican opponent, Mississippi State Sen. Chris McDaniel, is known for far-right stances and harsh rhetoric against immigrants and liberal women. McDaniel came under fire twice this month, first for suggesting African Americans have been “begging for federal government scraps” for 100 years, and again for saying 99 percent of sexual assault allegations are “made up.”

The comments about sexual assault, which McDaniel made on American Family Radio, came in response to a question about allegations against Brett Kavanaugh, President Trump’s U.S. Supreme Court nominee. Christine Blasey Ford accused Kavanaugh of attempting to rape her when they were teenagers; she plans to testify before members of the Senate next week.

At the press conference with Patrick, Espy said he considers Ford’s allegation “credible.”

“It’s a serious issue,” Espy said. “I think the allegation is credible. This is a lifetime appointment to the highest court in the land. I think we can wait a little longer for a credible investigation.”

Ford asked the Senate to request an FBI investigation before a vote on Kavanaugh, but Senate Republicans have refused so far. On Sunday, the New Yorker revealed that another woman has accused Kavanaugh of sexual misconduct that allegedly took place when he was in college. Michael Avenatti, the attorney for Stormy Daniels, said Sunday night that he has information on a third accuser, and a newspaper in suburban Washington, D.C., is reporting on a possible fourth accuser.

Some Democratic donors have pushed Patrick to run for the Democratic nomination for president in 2020. Last month, Patrick announced his Reason to Believe PAC, which he said he will use to help Democrats who share his vision in this November's midterms—which will be held the same day as Mississippi’s special election—a sign he may be gearing up for a run.

The Jackson Free Press asked Patrick about potential plans for a 2020 run.

“For him?” Patrick said, gesturing toward Espy. “You’ve got to ask him. I’m just focused on him today.”

After leaving the governor's office in 2015, Patrick took a position at Bain Capital, the private equity firm founded by Romney. During the 2012 campaign, President Obama attacked Romney for his work at Bain, claiming Bain enriched itself at the expense of others. Though Patrick was a surrogate for Obama's campaign that year, he defended the company at the time.

Obama has reportedly encouraged Patrick to run in 2020, despite arguing in 2012 that experience at Bain Capital ought to be a strike against Romney's presidential ambitions.

The same year Patrick joined the Justice Department in 1994, Espy stepped down as U.S. secretary of agriculture amid a flurry of accusations that he illegally accepted gifts from business lobbyists. Prosecutors charged him, but a jury ultimately acquitted him of all 30 counts in 1998.

After the Hattiesburg press conference, Espy and Patrick attended a local small business panel that was closed to the press. Patrick planned to deliver an official endorsement in Jackson Saturday evening.

On. Nov. 6, the same day as national midterms, voters choose between Espy, Hyde-Smith and McDaniel in the U.S. Senate special election. Mississippi's other U.S. Senate seat, as well as House positions in each of the state's four congressional districts, will also be on the ballot. Polls in the state are open from 7 a.m. to 7 p.m.

Read the Jackson Free Press' wide-ranging interview with Espy here, including about his exoneration on all charges.