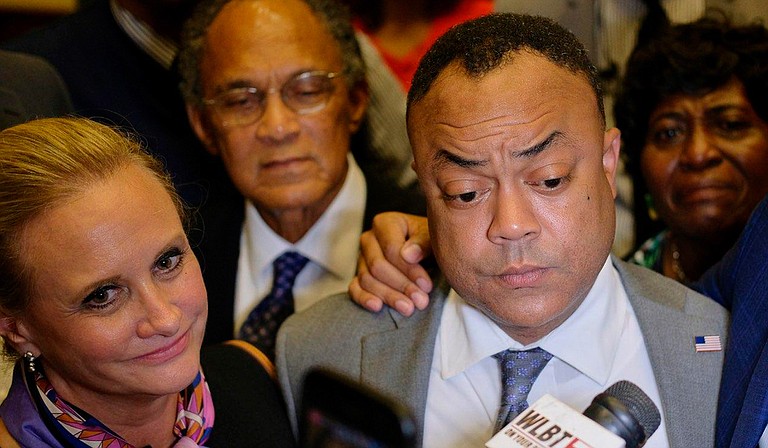 JACKSON — Hinds County District Attorney Robert Shuler Smith's most recent trial for aggravated stalking and robbery charges spanned two days in a Rankin County courtroom. An all-white jury of four men and eight women found him not guilty of robbery, but could not decide about the aggravated stalking charge.

The charges stem from an August 2015 incident between Smith and his ex-girlfriend, Christie Edwards at his trailer in Pearl, Miss., DA Smith and Edwards had broken up at the time, but he allowed her to stay there.

If you missed the Jackson Free Press coverage of the quick but meaty trial, here is the CliffsNotes version. But if you want to sift through the details of Smith's last three trials, head over to our award-winning archive.

Attorney General Jim Hood's office only prosecuted Smith for robbery and aggravated stalking. However, the AG's office has not yet dealt with two misdemeanor counts of simple domestic violence against Smith stemming from the August 2015 altercation with his ex-girlfriend.

The State could also retry Smith for the aggravated stalking charges that deadlocked the jury. Hood's office would not comment directly about whether or not they would prosecute Smith again.

This Rankin County trial represents the third time Hood's office has prosecuted DA Smith in the last two years. The previous two trials were for hindering the prosecution of Christopher Butler, whom the State of Mississippi later convicted of drug charges that brought a 30-year sentence. The DA's first trial resulted in a mistrial, and the jury acquitted him last summer on all charges during the redo trial.

Assistant Attorney General Stanley Alexander was one of the prosecuting lawyers in the Rankin County trial, and he also ran against Smith for the Hinds County District Attorney seat in 2015. DA Smith's attorney, Michael Sterling, raised concerns about this after the trial.

"You are not supposed to be prosecuted by a political opponent. It was wrong for that to happen," Sterling said.

3. State Got Rid of  Black Jurors?

During a post-trial conversation with reporters, Sterling also told reporters that the prosecuting attorneys excused every African American that had been on the jury who had not been disqualified for cause during jury selection. Sterling said the defense team raised a Batson challenge, which is an objection to what they saw as the state excluding jurors from the pool based on race.

The attorney general's office declined to comment about the jury selection process.

On Sept. 12, Smith waived his Fifth Amendment right and served as the defense's only witness.

The DA did not deny he took the gun for "everyone's safety," nor did he deny pushing Edwards or that her injuries could have come from the shoves. Smith testified that he "had to" push Edwards in order to leave. In Alexander's line of questioning during cross-examination, Smith said that "pushing is not" violent.

"You're not saying that your pushing didn't cause those bruises?" Alexander asked.

Or maybe it's more accurately a trapezoid. Smith's wife was formerly known as Wanda Fears when she was married to a man named William Fears. He testified on Sept. 11 because he was romantically involved with Smith's ex-girlfriend, Edwards, in August 2015, and he was at the trailer when the incident took place. He testified that he hid in the closet when he heard DA Smith enter the trailer.

In 2015 Smith began dating Wanda Fears and married her in September 2015, a matter of months after ending his relationship with Edwards.

Read more about a witness hiding in the closet and Smith's comments about this case being a modern-day "Emmett Till"  at jfp.ms/dafiles.