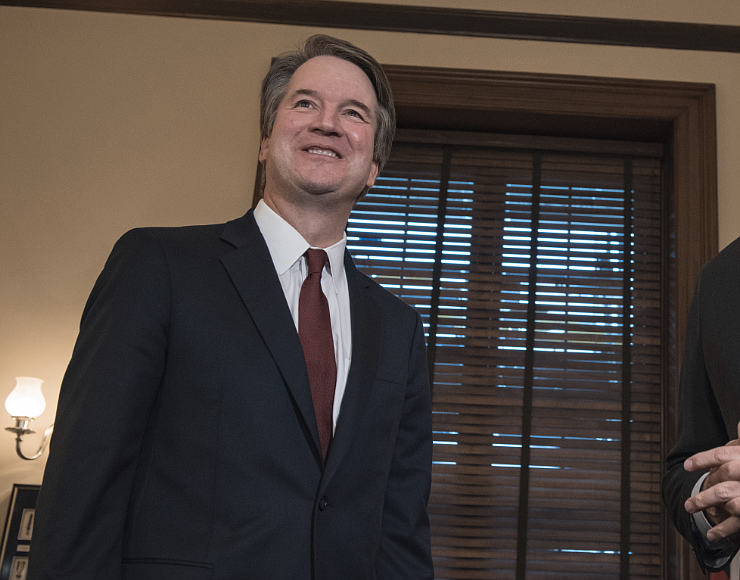 The tone of the 2003 email is different from Brett Kavanaugh's remarks stressing how difficult it is to overturn precedent like Roe during confirmation hearings, which opened for a third day Thursday with angry complaints and finger-pointing among senators over the unusual vetting process for the judge.

WASHINGTON (AP) — A newly disclosed email shows Supreme Court nominee Brett Kavanaugh has questioned whether the 1973 Roe v. Wade case on abortion access is settled law. The email was obtained by The Associated Press as senators were launching a final round of questioning Thursday of President Donald Trump's nominee.

Kavanaugh's 2003 comments came as he was reviewing an op-ed article in support of two judicial nominees while he was working at the George W. Bush White House, according to the document.

"I am not sure that all legal scholars refer to Roe as the settled law of the land at the Supreme Court level since Court can always overrule its precedent, and three current Justices on the Court would do so," he wrote, referring to justices at the time, in an email to a Republican Senate aide. The document is partially redacted.

The tone is different from Kavanaugh's remarks stressing how difficult it is to overturn precedent like Roe during confirmation hearings, which opened for a third day Thursday with angry complaints and finger-pointing among senators over the unusual vetting process for the judge. It has resulted in hundreds of thousands of pages of Kavanaugh's documents being withheld as confidential or kept from release under presidential privilege by the Trump White House.

Chairman Chuck Grassley, R-Iowa, said more documents would be released Thursday and stood by his handling of Kavanaugh's paper trail.

"My process was fair," Grassley said as he opened the session. "Before this day is over members will have the documents they need to ask the questions."

So far, Kavanaugh appears to have avoided any major missteps that could block his confirmation. But after a marathon 12-hour session Wednesday, he also does not seem to have changed minds on the Judiciary Committee, which is split along partisan lines.

The judge left unanswered questions over how he would handle investigations of the executive branch and whether he would recuse himself if cases involving Trump under special counsel Robert Mueller's probe end up at the court.

Trump says he's pleased with his nominee's performance, and Republicans are united behind him, eager to add a conservative judge to the court.

Late in the evening, Kavanaugh seemed to stumble at first when questioned by Democrat Kamala Harris of California about whom he might have spoken with at a certain law firm concerning the investigation into Russian election meddling. The firm in question was founded by Marc Kasowitz, who has represented Trump.

Kavanaugh eventually said he couldn't think of any such conversations but would need to see a list of lawyers who work at the firm.

The questioning of Kavanaugh has carried strong political overtones ahead of the November congressional elections. Democrats lack the votes to block confirmation, but have been pressing Kavanaugh for his views on abortion rights, gun control and other issues. Protesters have added to the challenges for the hearing, repeatedly interrupting proceedings.

Pressured by Democrats with Trump on their minds during Wednesday's grueling session, the judge insisted that he fully embraced the importance of judicial independence. But he refused to provide direct answers to Democrats who wanted him to say whether there are limits on a president's power to issue pardons, including to himself or in exchange for a bribe. He also would not say whether he believes the president can be subpoenaed to testify. Still, he began his long day in the witness chair by declaring that "no one is above the law."

Democrats are concerned that Kavanaugh will push the court to the right and that he will side with Trump in cases stemming from Mueller's investigation of Russian interference in the 2016 election and possible ties to the Trump campaign. The 53-year-old appellate judge answered cautiously when asked about most of those matters, refusing an invitation from Democratic Sen. Richard Blumenthal of Connecticut to pledge to step aside from any Supreme Court cases dealing with Trump and Mueller's investigation.

Under questioning by Republicans, Kavanaugh stressed the importance of judicial independence, "not being swayed by political or public pressure."

On abortion, Kavanaugh said the landmark 1973 Roe v. Wade decision has been affirmed "many times." He defended his dissenting opinion last year in the case of a pregnant immigrant teen in federal custody. Kavanaugh would have denied her immediate access to an abortion, even after she received permission from a Texas judge.

Sen. Orrin Hatch, R-Utah, praised Kavanaugh for hiring female lawyers as clerks as a judge on the District of Columbia Court of Appeals, and then posed questions about whether Kavanaugh was aware of sexual harassment allegations against retired circuit court Judge Alex Kozinski in California. Kavanaugh, who considered the judge a friend and mentor, said he had known nothing about the allegations until they were disclosed last year.

"It was a gut punch for me," he said, and he was "shocked, disappointed, angry."

Kavanaugh told Sen. Mazie Hirono, D-Hawaii, he had been unaware of the domestic violence allegations against Rob Porter, who was Trump's staff secretary, until they were publicly disclosed. Journalist Bob Woodward's new book about Trump says Kavanaugh recommended Porter for the job.

Kavanaugh had served as staff secretary to George W. Bush, and his work in the White House has figured in the hearing. Democratic senators have fought for access to documents from his three years as staff secretary, saying those could shed light on his views about policies from that era, including the detention and interrogation of terror suspects. Republicans have declined to seek the papers, and instead have gathered documents from his work as White House counsel to Bush.

When questioned about the honesty of his 2006 testimony during his nomination for the appellate court when he said he was not involved in some Bush-era policies, Kavanaugh said he was "100 percent accurate."

Late Wednesday, Sen. Cory Booker, D-N.J., drew a rare partnership with Sen. Mike Lee, R-Utah, to release of some of the Bush-era documents. Lee complained that Booker was relying on an unreleased email to question Kavanaugh's openness to racial profiling by police, but then agreed to work for its release.

Republicans hope to confirm Kavanaugh in time for the first day of the new Supreme Court term, Oct. 1.