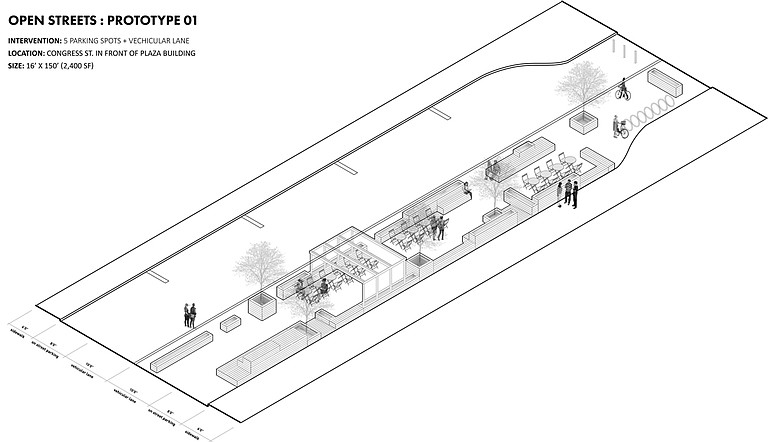 The City of Jackson’s planning and development department will debut its parklet on Congress Street, which will have outdoor furniture, bike racks and more, on Sept. 21. Jackson Department of Planning and Development

JACKSON — Development often happens in fits and starts in Jackson, but fall 2018 should see a lot of bulldozers and hard hats around town.

The Greater Belhaven Foundation recently announced plans to construct a new Belhaven Town Center beginning in fall 2018. The center will be a mixed-use residential and commercial building on Manship Street. David Turner, owner of David Turner Companies (147 Republic St., Madison), is heading up the construction.

"We wanted to come up with a strategic long-term plan for an economic corridor in Belhaven. The idea is to develop that area and turn it into a center of commerce for this part of Jackson, with boutiques and restaurants located in a more walkable and livable area."

When it is finished, the Belhaven Town Center's 117,000 square feet will have retail and office space, mixed residential space, an outdoor deck, co-working offices and parking spaces. Development will include both new construction and renovation of existing structures in the area.

For more information, call the Greater Belhaven Foundation at 601-352-8850 or visit greaterbelhaven.com.

Ronnie Crudup Jr., a lifelong Jackson resident and executive director of New Horizon Ministries Inc., has been hard at work renovating parts of south Jackson. Over the summer, New Horizons renovated the Terry Road swimming pool, which had been closed for nearly two years before the organization fixed leaks, repainted and performed other needed repairs. Now, Crudup's focus is on tearing down more abandoned and blighted properties in south Jackson and refurbishing others for residents to move into.

"We call it the Isaiah 58 Housing Project, or I-58 for short," Crudup told the Jackson Free Press. "We trying to take dilapidated properties and rehabilitate them so we bring families back into south Jackson. We're also not going to use any kind of cookie-cutter approach to this; every project we work on is going to be tailored depending on the needs of individual families and the area."

Currently, Crudup says the I-58 project is focusing on two areas within a one-mile radius of New Horizon Church (1770 Ellis Ave.) and the New Horizon Center (3565 Wheatley St.).

New Horizon is working on three properties in the Alta Woods subdivision in south Jackson and is preparing another property off of McDowell Road for a new family to move in. New Horizon is installing new plumbing, acquiring new appliances and doing tree and landscaping work at the refurbished homes.

For more information on the Isaiah 58 Housing Project, visit www.newhmi.org/i-58.html.

The City of Jackson was one of 129 organizations nationwide that received a portion of $1.3 million in grant money from nonprofit AARP as part of the 2018 AARP Community Challenge grant program. Jackson received $15,000, which will go toward renovations to Congress Street to make the area more pedestrian friendly. The city plans to complete the renovations by Sept. 21.

As part of the renovations, the area between Pascagoula and Pearl streets will get new outdoor furniture, landscape design, bike infrastructure and shaded areas. The renovations are part of the Jackson Planning Department's "Open Streets" program, which aims to turn automobile-oriented streets into more vibrant social spaces.

On Sept. 21, the City will host a full day of events and a Downtown Design Dialogue session about Congress Street. The debut will coincide with a nationwide event called PARK(ing) Day, which turns parking spots into parks for the day.

Growing Around the Convention Complex

City of Jackson's Planning and Development Department hosted a Downtown Design Dialogue on June 30, where it revealed plans to develop 9 acres in front of the Jackson Convention Complex s.

Jackson originally took out a  $7-million loan from the U.S. Department of Housing and Urban Development to develop the convention center space in 2008, but the plan fell through when the initial developer that purchased the land from the City went bankrupt, and the land returned to the Jackson Redevelopment Authority.

Among the plans for what to do with the space are residential apartments among condominiums, office space, vertical parking, green spaces, a movie theater and a hotel connecting to the convention center. Participants also discussed using the stormwater from the floodplain the center sits on to create a body of water for swimming or boating.

Fuse.Cloud, a Jackson-based technology company that provides voice, data, fiber Internet and cloud-based services, recently announced that it will move its headquarters to the Landmark Center in downtown Jackson this October.

With the move, Fuse.Cloud will be the first commercial tenant to have its corporate headquarters in the center. The company will also add a Louisiana-based sales director and eight additional staff members after the move.

The company opened in 2006 as Broadband Voice and changed its name to Fuse.Cloud in April 2016 after switching to cloud-based services from its original focus on Voice over Internet Protocol technology, or VoIP (it uses Internet protocol networks to deliver voice and multimedia communications).

The Landmark Center will also bring a new grocery store to downtown Jackson when the redevelopment of the 366,000-square-foot building is complete. Corner Market, a full-service deli from Hattiesburg-based Robert Co., will open a 17,500-square-foot store with indoor seating. Construction on Corner Market should be finished by 2020.

Robert Co. owns eight Corner Market locations in Mississippi along with Mississippi chains Grocery Depot and Sunflower. The company signed a 10-year lease with Weinstein Nelson Management, a Baton Rouge-based company that is managing and directing the Landmark Center's redevelopment.

WN Management acquired the Landmark Center building in 2016 and plans to build 200 apartments inside it.