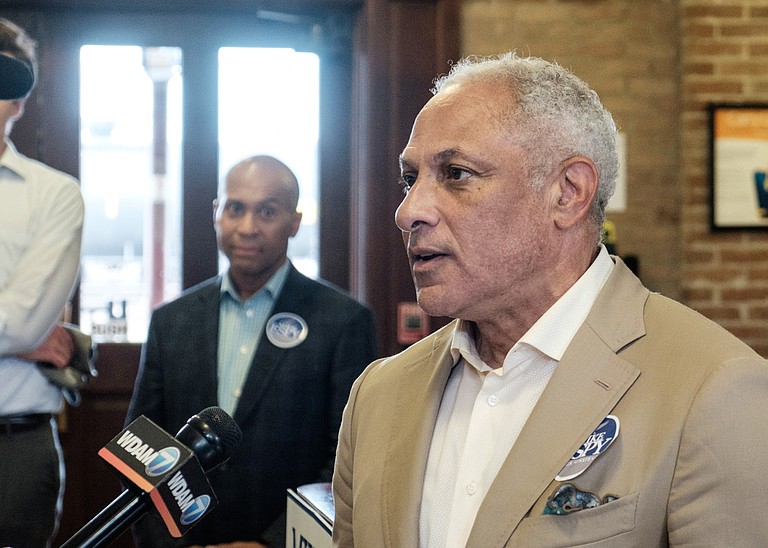 "I just read an article that quoted Cindy Hyde-Smith saying Chris McDaniel voters were 'horrific' and can't think for themselves," Espy said in a video posted to his campaign's official Twitter page Monday. "Wow, give me a break."

Espy is likely referring to an Oct. 20 article by far-right website Breitbart that misleadingly refers to a comment Hyde-Smith communications director Melissa Scallan made to the Jackson Free Press earlier this month and wrongly attributes it to Hyde-Smith herself. Scallan did not directly call McDaniel's supporters "horrific"; she said their "behavior ... was horrific."

In the closing months of the 2016 campaign, Clinton, the former secretary of state, said "half" of then-candidate Donald Trump's supporters could be put in a "basket of deplorables." In his video, Espy said Scallan's comments—which he also misattributed to Hyde-Smith herself—are similar.

"Horrific is almost the same as 'deplorable,'" Espy said. "The person who said that was wrong, the person who said this is wrong. Chris McDaniel and I don't agree on a lot, but we both agree on this fact: Mississippi voters can think for themselves, and what Cindy Hyde-Smith said was wrong. Why don't we engage in a campaign that lifts voters up instead of tearing them down?"

In a video published by the Daily Journal on Oct. 15, Hyde-Smith did say McDaniel "has got people who can't think for themselves."

On this one issue, Chris McDaniel and I agree: Mississippi voters can think for themselves.#mssen pic.twitter.com/vqW0KbSxkv

In the closing months of the 2016 campaign, Clinton, the former secretary of state, said "half" of then-candidate Donald Trump's supporters could be put in a "basket of deplorables." In his video, Mike Espy said Melissa Scallan's comments—which he also misattributed to Cindy Hyde-Smith herself—are similar.

McDaniel also compared the "horrific" comment to Clinton's "deplorable" comments in an Oct. 12 press release. Like the Breitbart article, McDaniel misattributed the remark to Hyde-Smith herself.

Mississippi Gov. Phil Bryant appointed Hyde-Smith—a former Democratic state senator who switched to the Republican Party in 2010—to the seat she now holds in April after former Sen. Thad Cochran retired due to poor health. In 2014, McDaniel narrowly lost a bid to unseat Cochran in the Republican Party primary.

Now that he's running for the seat again in this year's special election, McDaniel spends considerable time bringing up Hyde-Smith's Democratic past. He has even engaged in a social-media campaign to tie her to Clinton. McDaniel campaign ads with Hyde-Smith and Clinton photoshopped alongside each other with the tagline "She's With Her" are appearing across the web.

A McDaniel campaign ad compares U.S. Sen. Cindy Hyde-Smith to Hillary Clinton, atop an article that does the same. Screenshot of Breitbart

In the video published by the Daily Journal in Tupelo, Hyde-Smith called McDaniel a "liar" as she complained about the allegations.

"He knows that I cannot stand Hillary Clinton, and he's trying to get to me," Hyde-Smith fumed.

Speaking to the Jackson Free Press in August, Hyde-Smith went as far as to hug her 19-year-old daughter, Anna-Michael Smith, and swear on her life that she did not vote for Clinton.

From 'Deplorables' to Delusional': An Out-of-Context Odyssey

Hyde-Smith has compared comments McDaniel made in 2016 to Clinton's "deplorables" remark, too. During the Republican primaries, McDaniel wrote in a Facebook post that "a small number of Trump's people have become delusional, detached from reason and sanity."

Mississippi Victory Fund, a PAC supporting Hyde-Smith, is running ads tying "delusional" and "deplorables" together. The ads, though, cut out key context by only quoting McDaniel as saying, "Trump's people have become delusional"—suggesting he meant all Trump supporters as opposed to "a small number."

"McDaniel has not only attacked the president, but also his supporters," former Mississippi State Sen. Merle Flowers, a spokesman for the Mississippi Victory Fund, said in a statement on Oct. 2. "Cindy Hyde-Smith, on the other hand, is someone President Trump can count on."

"You know, to just be grossly generalistic, you could put half of Trump's supporters into what I call the basket of deplorables, right? The racist, sexist, homophobic, xenophobic, Islamophobic—you name it," Clinton said, moments after referencing widespread violence and discrimination against LGBT people. "And unfortunately there are people like that. And he has lifted them up."

Those people, though, Clinton said, are "not America." She then described another group of Trump voters quite differently.

"That other basket of people are people who feel that the government has let them down, the economy has let them down, nobody cares about them, nobody worries about what happens to their lives and their futures, and they're just desperate for change," Clinton said.

"It doesn't really even matter where it comes from. They don't buy everything he says, but he seems to hold out some hope that their lives will be different. They won't wake up and see their jobs disappear, lose a kid to heroin, feel like they're in a dead-end. Those are people we have to understand and empathize with as well."

Clinton later said she regretted saying the "deplorable" basket was as large as "half" of Trump's supporters, but not the descriptor itself.

"America was until this past generation a white country designed for ourselves and our posterity," Spencer told the crowd. "It is our creation, it is our inheritance, and it belongs to us."

That night, Duke tweeted that Trump's victory was "a great win for our people" and "one of the most exciting nights of my life."

Trump also uses the slogan "America First," including in his inaugural address—a slogan used by the Ku Klux Klan.

At a rally in Texas Tuesday night, Trump described himself as a "nationalist," but made no reference to the word's historical and current associations with Nazism or white supremacy.

Hyde-Smith, who earned Trump's endorsement in August, has made tying herself to Trump her number-one campaign priority. She regularly touts an analysis by FiveThirtyEight election data guru Nate Silver, which says she's voted with Trump 100 percent of the time.

When Bryant appointed her, Hyde-Smith became the first woman from Mississippi to serve in Congress and could become the first elected come November.

Espy became the first black congressman from Mississippi since the post-Civil War Reconstruction Era when voters sent him to the U.S. House in 1986. From 1993 to 1994, he served as secretary of agriculture under President Bill Clinton. This year, he could become the first black U.S. senator from the state since Reconstruction, when Sens. Hiram Revels and Blanche K. Bruce represented the state in Washington, D.C.