Mississippians Fight for Medical Marijuana in 2020 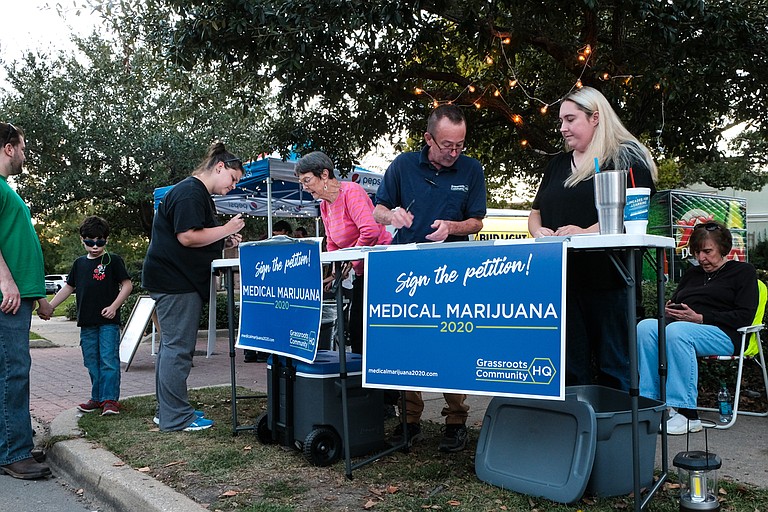 As the funky sounds of Austin-based Roxy Roca blasts over the hundreds gathered for Live at Five in Hattiesburg's Town Square Park, old friends reminiscence over beer, their children greet strange but friendly dogs, a local vendor struggles to keep up with demand for tacos, and across the street, the Medical Marijuana 2020 ballot initiative racks up signatures.

All across Mississippi, supporters of the campaign spend the weekends canvassing crowded local events like this one, searching for the 86,185  signatures necessary to get legalization on the state's 2020 ballot.  Hope for Harper Grace

Ashley Durval first filed the initiative in July. She hopes medical marijuana can be used to treat her daughter, Harper Grace, who has Dravet Syndrome, a rare genetic dysfunction of the brain that begins in infancy with intractable epileptic seizures that will continue for the rest of the child's life. The seizures can last for hours and come in clusters.

In medical marijuana, many are finding a far more effective treatment than the traditional pharmaceutical cocktails. Durval first learned about the promise of medical marijuana for treating Dravet after watching a 2013 CNN special with Dr. Sanjay Gupta, and has been fighting to bring it to Mississippi ever since. 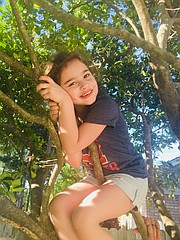 Ashley Durval filed a ballot initiative for the legalization of marijuana on July 30, 2018, in hopes that her daughter, Harper Grace (seen here), will someday be able to access cannabis oil to treat her Dravet syndrome, a severe form of epilepsy. Photo courtesy Ashley Durval

In 2014, Harper sat in Mississippi Gov. Phil Bryant's lap as he signed Harper Grace's law, which was supposed to allow her and other children like her to obtain treatment with cannabis oil at the University of Mississippi Medical Center.   Because UMMC is federally funded, however, federal approval is required and has yet to be granted; Harper Grace's Law has not allowed for the treatment of even one child with cannabis oil in the four years since Bryant signed it.

The Medical Marijuana 2020 initiative would bypass the roadblocks that law ran into by allowing for the creation of medical marijuana treatment centers all across the state—not just at one federally-funded health center.

Durval said she's not doing it solely for Harper Grace, though; the initiative would make medical marijuana legally accessible for Mississippi patients suffering not just from epilepsy, but from debilitating conditions like AIDS, cancer, chronic pain, multiple sclerosis, post-traumatic stress disorder and other conditions in which a licensed physician believes a patient would benefit from its use. The initiative would not legalize recreational marijuana.

Medical marijuana would offer numerous benefits for people struggling with chronic pain and mental-health-related illnesses like post-traumatic stress disorder, said Phyllis Hollenbeck, a primary-care provider at the Jackson VA Medical Center and the author of "Sacred Trust: The Ten Rules of Life, Death, and Medicine."

Hollenbeck, who wanted to make clear she was speaking for herself and not as a Veterans Administration representative, said medical marijuana could offer a safer alternative for veterans for whom an abundance of prescription medications can become a dangerous "brain cocktail."

"One of my sons is a veteran," she said. "The last thing you want to do is put a lot more of what we call centrally acting drugs that affect brain chemistry. You don't want to put that chemical IED in their head and see what happens."

Hollenbeck has worked with Jackson law enforcement to provide Naloxone kits that can be used to reverse opioid overdoses. Medical marijuana, she said, could become another facet in Mississippi's fight against the opioid epidemic by offering a safer alternative. A 2014 study found that in states with legal medical marijuana, 25 percent fewer people die from opiate overdoses each year.

"I think if we have a united voice saying, 'This is a medicine, this can be used as a medicine that is effective; it's not addictive; it's going to be very well controlled,' then that's the way to get the average person in Mississippi to understand it," Hollenbeck said. "And I think that a lot of people have relatives who could benefit."

James Moore, a reserve police officer and former alderman in Petal, believes legal medical marijuana could have helped his son. "We lost our son Jeffrey to a heroin overdose in 2015," Moore said.

"Jeffrey and I had a lot of discussions about marijuana. ... Had we had a different way of fighting the drug war than we do right now, he might still be here."

As a matter of crime, Moore said, the criminalization of medical marijuana is "just making criminals out of people who are at the end of their life," such as patients with terminal cancer, and out of compassionate caregivers who provide it to them.

Not everyone supports legalizing medical marijuana in Mississippi, though. The day after Durval filed the initiative, Bryant, despite being the governor who signed Harper Grace's bill into law, condemned the effort in a Facebook post.

"I will be voting 'no' if this makes it on the ballot," Bryant wrote. "With all the pharmaceutical advancements we have seen, it would seem strange to bring pot into the equation."

Durval stresses that the bill isn't about recreational use. She invoked the day her child sat in the governor's lap, her family full of hope that the law would make the treatment possible.

"All I'm asking is if it was anybody in his family—or in the family of anyone else who is against it—what would you do?" Durval said. "I understand why he is against it, and I don't fault him for that, but you can't fault me or any other family for trying to do everything they can for their child."

"If you were a helpless father or mother watching your child seize, and you knew there was something out there that could possibly better control those seizures, you would do it, too, and you can't lie and say you wouldn't," she said. "Try to look at it from our perspective and think about what we go through everyday, fearful and full of the kind of anxiety that turns your world upside down. You're desperate as a mother and as a person to do everything you can."

Ocean Springs Mayor Shea Dobson, who is also a Republican, told the Jackson Free Press that as someone who believes government's role in health care should be limited, he would welcome the legalization of medical marijuana in the state. Like Bryant and Agriculture Commissioner Andy Gipson, he is a conservative.

"Those who say we should prohibit medicine to people who we ask to go and fight in wars are anti-military," Dobson said. "And I think breaking up homes by throwing kids or parents into jail because they decide to medicate with medical marijuana is anti-family."

Dobson was speaking generally, and not in reference to comments made by Bryant or Gipson. He said he knows conservative politicians across the state who privately support legalization, but keep quiet publicly for electoral reasons. Still, he believes conservative voters and public officials alike can be won over on the issue.

Dobson is helping gather signatures for the initiative in Ocean Springs.

Jon Pritchett, president of the Mississippi Center for Public Policy, a conservative think tank in Jackson, told the Jackson Free Press that he believes the biggest hurdle to passing the initiative will be communicating to Mississippi voters that the initiative is about treating people who suffer with debilitating illnesses—not about "getting high."

"If it's communicated well that it's really about helping patients and letting professionally licensed medical professionals be able to make their own decisions about how they treat their patients, I think it has a good chance of passing," Pritchett said. "There is some promising hope that, as an alternative to other medications, some derivatives of medical marijuana could be helpful in treating chronic conditions like epilepsy."

Marilyn Tinnin, the editor of Mississippi Christian Living magazine and a supporter of the initiative, said the tight restrictions on medical marijuana use make it possible for her to support the Medical Marijuana 2020 campaign for "humane" reasons.

"My one reservation as a Christian is that it has to be regulated properly, and I know in some other states they have had some issues with regulating it properly," Tinnin said. "I feel like we have the benefit of learning from their mistakes and not making the same ones."

If the initiative were to become law, the Mississippi State Department of Health would issue a medical marijuana identification card. Even with that, though, patients under medical marijuana treatment would still not be able to smoke it in a public place or operate a vehicle while under its influence.

A prior initiative in Mississippi failed in 2015 after supporters were unable to collect enough signatures to make the 2016 ballot. It, however, was light on regulations and sought to legalize not just medical marijuana, but recreational marijuana as well. It never garnered the level of support from physicians and public officials as this initiative has already. The Medical Marijuana 2020 campaign must collect the signatures of 86,185 Mississippians by the September 2019 deadline to qualify for the November 2020 ballot.

Ashton Pittman covers politics and elections for the Jackson Free Press. Email him at [email protected].