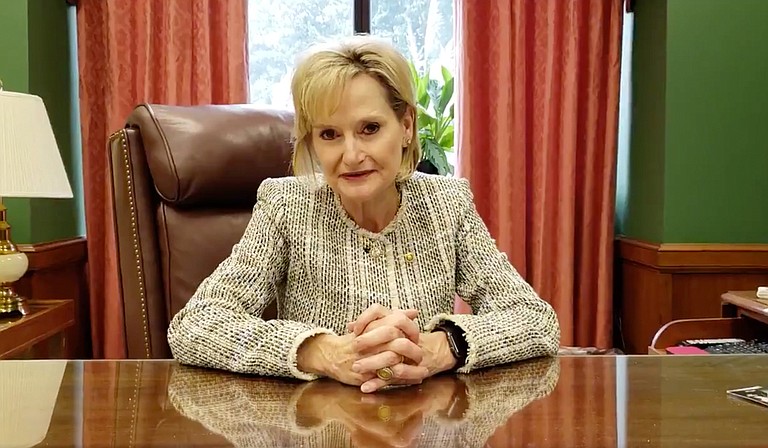 U.S. Sen. Hyde-Smith, R-Miss., suggested opponents of Brett Kavanaugh's confirmation to the U.S. Supreme Court were "evil" in a video posted on Twitter. Screencap via @SenHydeSmith on Twitter

JACKSON — U.S. Sen. Cindy-Hyde Smith, R-Miss., continued to defend her support for the confirmation of U.S. Supreme Court Justice Brett Kavanaugh on Tuesday, accusing Democrats of "manipulation of the confirmation process" and "a disservice to victims of sexual violence" in a tweet.

Senate Democrats pushed for an investigation into allegations of sexual assault that multiple women leveled against Kavanaugh. After a limited investigation, one Democrat joined 49 Republicans to confirm Kavanaugh on Saturday, Oct. 6. The 50-48 vote was the narrowest one to confirm a justice to the highest court in the land in more than a century.

Hyde-Smith tweeted a video that afternoon in which she suggested accusers of President Trump's Supreme Court pick and Democratic opponents were on the side of "evil."

"Today, good won over evil," Hyde-Smith said. "There's been a lot that's happened this week that we're gonna have to get past, and I just want to move forward here on a positive note. I think he is going to be a great Supreme Court justice and serve the country well."

On Tuesday, Trump, too, suggested Kavanaugh's opponents are "evil."

"I'm just saying you have forces saying things that were evil," Trump said. "They were bad people, and he is a very, very fine man, and what was said about him should never have been said."

In a press release on the day of the vote, Mike Espy, Hyde-Smith's Democratic opponent in November's U.S. Senate special election, accused her of ignoring the sexual assault allegations in order to confirm "a judge with partisan ideals she agrees with."

"My opponent rushed to judgment when she ran to vote 'yes' on Brett Kavanaugh," Espy said. "It was a decision influenced not by duty to the Constitution or to the people of Mississippi but by party."

In September, Christine Blasey Ford alleged in testimony to the Senate Judiciary Committee that, when she was 15 and he was 17, Kavanaugh held her down and attempted to rape her in a bedroom at a party while covering her mouth to stop her from screaming. His friend, Mark Judge, she alleged, watched and at times egged Kavanaugh on.

"I was underneath one of them while the two laughed," Ford said. "Two friends having a really good time with one another."

In his statement, Espy said he believes Ford's accusations against the court's newest member.

"Dr. Ford is believable, and her testimony was powerful," Espy said. "We have a long way to go to make real progress as a country, and it's voices like hers that are critical to bring us forward."

The FBI did not interview either Ford or Kavanaugh about the allegations. President Trump and Senate Republicans limited the investigation to a short list of suspects. More than a dozen potential witnesses said the FBI did not contact them as they sought to provide evidence.

Kavanaugh's ascent to the Court solidifies a conservative majority on the court that opponents fear could lead to the rollback of LGBT-rights protections and the possible overturn of Roe v. Wade, the 1973 decision that legalized abortion nationwide.

On. Nov. 6, the same day as the national midterms, voters choose between Espy, Hyde-Smith and McDaniel in a non-partisan U.S. Senate special election. Mississippi's other U.S. Senate seat, as well as House positions in each of the state's four congressional districts, will also be on the ballot that day. Voters must bring a valid form of photo identification such as a driver's license. Polls are open from 7 a.m. to 7 p.m.

If no candidate receives more than 50 percent of the vote in the special election, the top two vote-getters will face one another in a runoff on Nov. 27. Voters who did not register in time for the Nov. 6 election can still vote in the runoff if they register 30 days prior.