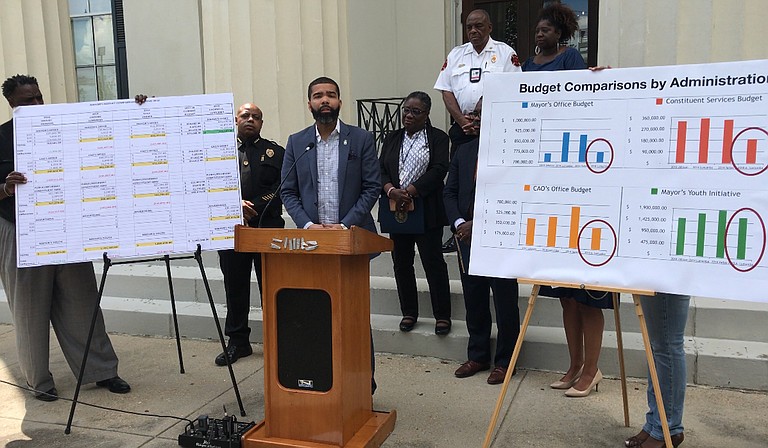 JACKSON — Jackson's Chief Administrative Officer Robert Blaine stepped up to a podium at the base of the steps outside City Hall carrying "antique technology." He held up one of the first generations of the iPhone from 2011 and an early portable Macintosh Apple laptop—the Powerbook Duo that came out in the 1990s. Then he presented a manila folder, much like the one the City of Jackson uses to transport hiring documents called "PER3s" from department to department because the City has no technological way to pass the information otherwise.

On the windy afternoon at the end of August, a welcome breeze ripped the City of Jackson's crest from the podium as Blaine spoke about the impact the City's technological deficit has on the budgeting process. He said the budget team had to build the $330-million budget by hand without easily accessible historical data because everything is stored on paper.

Blaine has long advocated for an enterprise resource planning system that would synchronize the City's data so that city officials can make better decisions.

At its Sept. 25 meeting, the council voted to accept a $3.5-million ERP system from Tyler Technologies, Inc.

Despite having to make decisions without some of the comparative data that are impossible to compute without an ERP, the council approved the budget, which is down nearly 10 percent overall from last year's, with a vote of 4-3. Ward 6 Councilman Aaron Banks, Ward 4 Councilman De'Keither Stamps and Ward 3 Councilman Kenneth Stokes all voted against the budget at the Sept. 12 meeting. The other members approved.

The fiscal-year 19 budget that went into effect Oct. 1 reflects both progress and devastating setbacks. For the first time, the City implemented a $300,000 advertising budget to "tell its own story." Those funds could also go toward billboards, TV and radio ads, sponsored social media posts, and new hires to help with marketing the City to be a desirable place to live. Some council members pointed out the overlap with Visit Jackson. Mayor Lumumba said this would be a "starting point, and the goal is to work with Visit Jackson," although he said he agrees there is more to be desired in the relationship with city's tourism arm.

The City added $8.5 million to its fund balance, and the City is operating in a $7.3-million surplus compared to a $6-million deficit when Lumumba took the reins. City workers are no longer on furlough and will receive a 2-percent cost-of-living increase across the board.The budget contained no millage increase.

"We have seen tremendous success with very little resources to accomplish it," Mayor Lumumba said in August.

However, there are other devastated departments that do not fit that bill of success. The fate of the Jackson Zoo still hangs in the balance, as the City continues to fund it at $990,000 this fiscal year. On Sept. 27, the council voted to move $350,000 from the Department of Human and Cultural Services to pay the Mississippi Department of Finance and Administration for the misused zoo bond money that led to former zoo director Beth Poff's resignation this spring.

The public works department, rocked by the Siemens water-billing crisis, needed two loans from the City's general fund to stay afloat. The City's failure to collect water revenue affected its bond rating with Moody's Investors Service sending its rating down to Ba2 from Baa3 in September, citing negative outlook.

"There is no way to put it other than that we're hanging on by our fingertips," Public Works Director Bob Miller told the Jackson City Council in August.

'Focus on the Cash'

The public works department is bleeding. Despite the City's efforts to give citizens payment plans to recoup the $10 million to $20 million the City failed to bring in last year because of billing errors, average monthly collections have fallen 42 percent in the last fiscal year.   The landfill and sanitation fund also did not generate enough revenue to cover expenses, with a 13-percent drop in revenue in the last fiscal year. This has implicated the water and sewer capital improvement fund, which heads into this fiscal year at a 61-percent loss (or $16 million).

"This in many cases overwhelms all of the other challenges put together," Miller said before the council during a budget hearing in August.

On Sept. 27, the city council approved an interfund loan of up to $5.3 million to the water and sewer enterprise fund to cover a debt-service payment for revenue bonds. It also approved a loan of up to $2.5-million loan to the sanitation enterprise fund because it had been operating in a deficit, and the City could not close out the account before the end of the fiscal year in the negative. Both loans came from the general fund.

Despite efforts to get corrected bills out to customers, these new bills did not immediately translate into cash. Miller said in August that the water and sewer fund should collect $7 million monthly, but as of August brought in around  $3 million to $4 million per month—some months worse, some better.

"The issues that we have with our billing system is a self-inflicted wound, and we've got to heal it—and we'll heal it in this coming year." Miller said. "I have focused on billing, and my staff has said, 'Billing does not equal cash—focus on the cash.'"

To speed things along, the City will soon begin shutting off water to non-paying customers. Miller said he made a mistake by allowing extended repayment plans. The City has not yet announced a date that water shutoffs would begin, but they could begin as soon as this month. In the meantime, he wants Jacksonians who need to pay bills to reach out.

"If we don't hear from the customer, we're only left to understand that that customer has left and no longer desires water service, and that results in a turnoff," Miller said in September.

What the Numbers Say

The Department of Planning and Development, however, is somewhat of a success story.

"If I were giving out awards for departments, not that I don't love all of the departments, but you are deserving of an MVP," the mayor told the planning department's leadership during a budget hearing in August.

Lumumba said he would feel guilty for not honoring any of the department's requests because more planning funds would serve as an investment that will pay for itself. The planning department implemented a long-range planning team that has begun to tackle the 9 acres of land in front of the Jackson Convention Complex downtown among other visible initiatives citywide.

The department will benefit from a 9-percent budget increase or $3 million.

The thinly strapped police department is currently 96 officers short and budgeted for 418 officers, with a recruit class underway. The department is down $2.8 million this fiscal year—an 8-percent decrease. Chief James Davis told the city council they cut sergeant and top-heavy positions from the budget because the department is not expecting to have promotions in the next fiscal year. The department also expects to spend less on automobiles, given the new addition of 46 cars to the fleet to the tune of $1.3 million.

The mayor's office budget increases by $560,117 or 52 percent, including $40,000 for the mayor's youth initiatives that have not been funded outright in years. The mayor's office also doubled its budget for travel expenses and air travel, taking the funds from $8,821 to $18,821 for travel expenses and $5,134 to $10,143 for air travel. Blaine said that all travel budgets had to be revised because none were sufficient to accommodate the mayor's schedule or department directors or who accompany him on his travels.

The budget also makes room for other city employees in finance, treasury, and purchasing to travel and attend professional-development trainings.

The 2-percent cost-of-living increase is a step toward giving city employees better wages because many can find better wages at Walmart. Some council members tried to make the de facto raises more substantial at the budget adoption meeting on Sept. 12.

"You've got to show some fairness," Ward 3 Councilman Kenneth Stokes said then. "Those who are making quite a bit of money shouldn't get less. And those paid the least about of money should get more."

Council members made attempts to give those who make less than $50,000 a 2.5-percent raise, excluding the part-time city clerks who got raises this spring from the increase, but these ideas failed because the majority of the council felt uncomfortable making decisions without numbers in front of them.

When council members grew frustrated with the lack of data, Blaine reminded them about the City's technology gap that makes it virtually impossible to compare numbers or do last-minute calculations for the council.

The paper-laden City will be put to the test, both technologically and financially, for better or worse, over the next fiscal year.