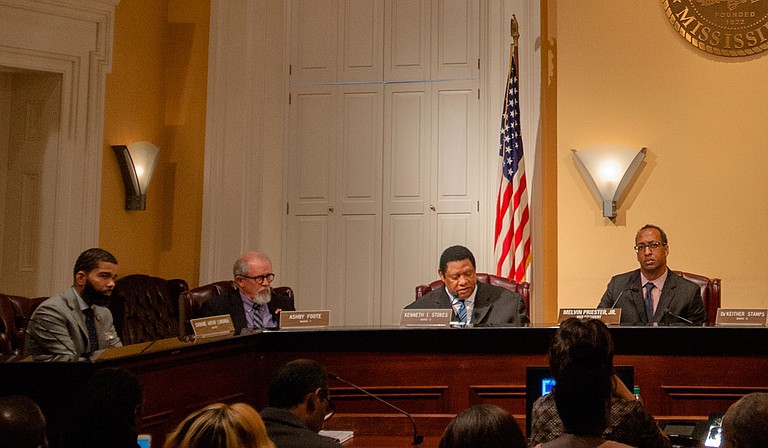 At the Jackson City Council meeting on May 8, the council voted to approve changes to the departments of parks and recreation, and public works' budgets, among other items. Photo by Stephen Wilson.

JACKSON — At the most recent city council meeting on May 8, the members gathered at City Hall to vote on a variety of issues from shifting budgets, to an ongoing concert and event series in Jackson.

To help with the City's public-works needs, the council accepted Director of Public Works Bob Miller's item that moved $6.9 million from the City's Municipal Sales Tax Commission, which oversees the 1 percent sales tax revenue, into his department. Public Works will use more than $4 million to reimburse the department's capital improvement fund, and the remaining $2 million will go toward the January 2018 winter emergency costs and to repair utility cuts to pavement throughout the City.

"This is a relatively simple matter that amends the budget to reflect the transfer of funds from the municipal sales tax commission to the water and sewer department," Miller said at the meeting.

The council also voted to increase the budget in the Department of Parks and Recreation to fill in for a Bloomberg grant the City has still not received. In a memo to the council, Ison B. Harris Jr., the director of parks and recreation, said that the department is in dire need of 15 more workers and more equipment to keep up with grass maintenance.

In anticipation of receiving this grant in January 2018, the parks department cut positions and transferred six park maintenance workers to Public Works. Mayor Chokwe Antar Lumumba said at the meeting that the grant was supposed to help the City with a recidivism program that would bring "returning citizens" and hire them to cut grass throughout Jackson. But, until then, the City is moving $285,000 from vacant positions to hire people who will tend weeds in the capital city.

Between the last two meetings, the council has also voted to spend nearly $200,000 from the Parks and Recreation budget to hire musical acts and a promotional team for the City's ongoing Jackson Soulful Music and Event Series. Harris said this money was set aside during budget hearings last year, and with sponsors and charging an admission fee for some of the events, he hopes to at least break even.

"This is our first time doing this," Harris said before the council. "We want to be as successful as we possibly can this first year. ... The idea is to bring people to Jackson and to have fun activities for kids in Jackson."

Ward 2 Councilman Melvin Priester Jr. walked out of the room before voting on the concert items, leaving the council with an even split. First up was the the $25,000 agreement to secure soul singer Betty Wright's performance at the Blues in the Park concert on June 17. The vote came to 3-3, with Ward 3 Councilman Kenneth Stokes, Ward 1 Councilman Ashby Foote and Ward 4 Councilman De'Keither Stamps opposing. When Stokes looked over to see that he had sided with Foote, he got up and left the room for the remainder of the votes on the concert series.

"Woah, I can't vote with Foote. Let me walk out of here," he said before slipping out of a side door.