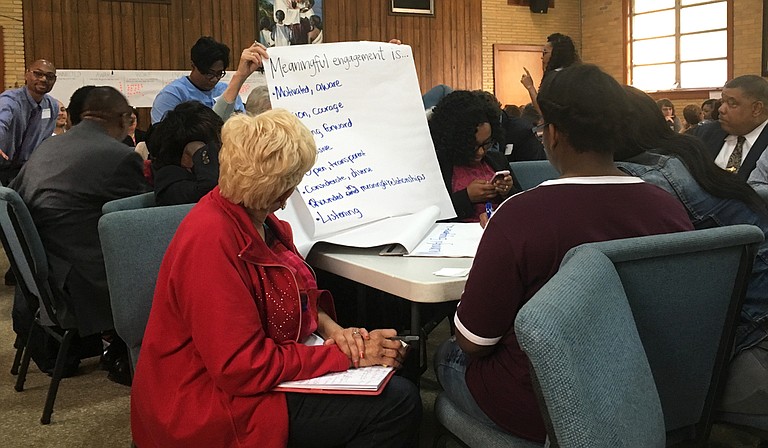 Nearly 100 people gathered at the Pearl Street AME Church on April 26 to brainstorm what community engagement will look like for the Better Together Commission's work to study Jackson Public Schools. Photo by Arielle Dreher.

JACKSON — The hall in the Pearl Street AME Church buzzed with chatter as community leaders, students, Jackson Public Schools staff and Better Together commissioners worked to define "community engagement" as the commission begins its outreach efforts in the school district.

The Better Together Commission is tasked with doing an in-depth analysis of the second-largest district in the state, which led to it hiring the Insight Education Group. The group's needs analysis will be published in November. The commission also hired One Voice to canvass the city for public input on how to improve JPS. The goal is for canvassers to knock on 60,000 doors in the coming months.

Before those efforts begin, commissioners wanted to get a sense of how Jacksonians wanted to be engaged in the process. On April 26, BTC brought together nearly 100 community members, school leaders and other stakeholders, and seated them at several tables to brainstorm ideas.

"We are in the process of starting our community-engagement work, and this is one of the most critical pieces we will do as a commission, and we want to know what is community engagement to you?" Paheadra Robinson, a commission member who also works for U.S. Census Bureau, asked the participants.

"What do we need to do to make sure we are hearing from the right people in the right places and getting the right information that will help inform decisions that are made about this district? We can't create this information without reaching out to the community, so tonight is an opportunity for us to hear from you."

Individual groups at tables worked on their definitions of "community engagement," as well as defining the core values that should guide the commission's process.

Three values stood out amongst the groups: inclusivity, transparency and accountability. The commission also recently launched a website and social-media accounts to engage Jacksonians, as well as solicit feedback.

Jason Thompson, co-founder of the Fahrenheit Creative Group that is doing social media and communications work for the commission, emphasized the importance of bringing all voices into the process, including people in places where not all Jacksonians go.

"... If somebody doesn't have a role, then that can't be the right solution because we all a part to play in moving this forward," he said.

One Voice will begin canvassing Jackson homes this summer. The Insight Education researchers, who have already been inside 15 schools, plan to return to the district later this month and visit more schools, as well as meet with parent focus groups.

Read more about the plan to improve Jackson Public Schools at jacksonfreepress.com/jpstakeover.