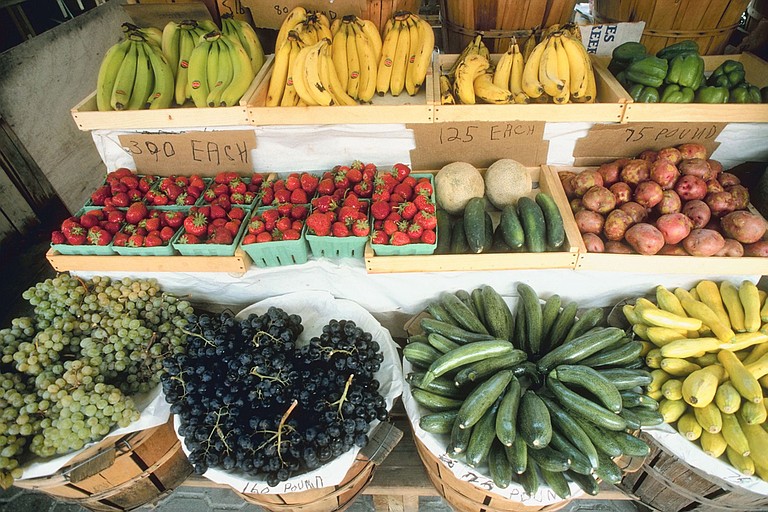 We have tons of healthy options here, more than I sometimes think about. We have opportunities to enjoy local produce, whether it's from the Mississippi Farmers Market or one of the great produce-pack programs in the area, such as Foot Print Farms or Up in Farms Food Hub. File Photo

Each year, my wife and I try to go on one big trip, and since we went out of the country in 2016, we decided to take in some of the natural splendor of the U.S. the past two years.

I don't know what first brought Seattle into the mix for 2018, but neither of us had been to the Pacific Northwest, so that's where we landed.

For just one week, I was a Seattleite, and it was awesome. I lived in a loft in its downtown area, enjoyed its arts scene, walked its streets and nearby forest trails, breathed its fresh air, and ate an obscene amount of its delicious food.

I've always been something of a food tourist. I don't travel to a place solely for food, no, but you better believe I'll be  scoping out the best restaurants once I have a destination picked out.

Whereas Jackson's restaurants are generally spread far apart like they owe each other money, so many of Seattle's coolest local eateries are within walking distance. The problem comes when you get so used to this method of transport that you get over-confident.

Thus was the case with what ended up being a four-mile, uphill trek to a shop called General Porpoise Doughnuts. However, while there, I got much more than just baked goods and coffee. I got a glimpse at what others think of our home state.

At the donut shop, a man and a woman, both in their early 20s or thereabouts, sat down next to us. I sometimes catch myself unintentionally listening to pieces of the conversations taking place around me, and I overheard that the woman was moving to the South.

The man, who said he "used to live in Florida so I know how it is," began to issue a series of warnings and non-factual factoids. So I perked up.

"Shrimp and grits is like a delicacy to them," he told her first. "It's like a rare treat, like fine dining." Beyond the general weirdness of that regional stereotype, I found that particularly funny because, on our first day in Seattle, we went to a great local restaurant called Some Random Bar. One of their main specials: shrimp and grits. Pot, meet kettle.

Second, the man warned his southbound associate to avoid our sweet tea, which we apparently brew with equal parts sugar and malice. "The tea there can literally kill you," he said. I'll have to paraphrase from there, but it was something along the lines of, "It can stop your blood."

Third, he told her about our plentiful cupcake stores, which apparently make up—oh, I don't know—all of our economy. "There are a ton of shops that just sells cupcakes; they're everywhere, practically one on every corner," he said.

He kept on in that vein, although I will confess that I did eventually speak up when he told her that the South as a whole is dangerous, like the place I've lived for most of my life is some lawless hellscape. Thank goodness he made it out alive.

After the woman mentioned that her mom had once driven through Mississippi on her way from Orlando, he replied, "She's brave."

As much as I hate to admit it—partially because Seattle is a town known for beer, baked goods and sugary coffee so that's hypocritical, but mostly because the donut-shop guy annoyed the bejeezus out of me—there was some truth underneath his overall misinformation.

Mississippians aren't known for our healthy eating habits. Quite the opposite, in fact. And unfortunately, it's to the point where people all around the country most likely think of that before any other image of our state.

We know that. We just don't like to acknowledge it, and when we do, we turn it into a quick joke before going about our business, unperturbed. The last time someone mentioned to me that we're the second most obese state in the U.S., my response was probably, "Hey, go, us. One spot better than last time. Sorry, West Virginia."

Obviously, it's not really a competition, but if it was, we would be losing not only against most of the nation but also against our past selves. A 2015 study from the Centers for Disease Control and Prevention show that 35.6 percent of Mississippi's adults were obese. That number jumped to 37.3 percent in the following year.

I don't say this to shame anyone who is looking to lose weight. I've been working on that over the past year, as well, and along with that journey come good days and bad days.

With how much I ate while vacationing in Seattle—well, that could have been a handful of bad days.

But while we ate often and well, we were always seeking out healthy, locally sourced foods, and Seattle has a lot of choices on that front.

We also had plenty of rigorous exercise. In about a week, we walked just shy of 60 miles. Sure, that's nothing compared to your average runner, but for someone like me who spends most of his days at a desk, that was an absolute game-changer.

Now that I'm back at home and at work, I do have to settle back into the swing of things, meaning hours staring at my computer with its desktop photo of mountains instead of, you know, actual mountains. However, I've also settled on applying some of the things that we experienced in Seattle to our life here in Jackson.

For starters, we have tons of healthy options here, more than I sometimes think about. We have opportunities to enjoy local produce, whether it's from the Mississippi Farmers Market or one of the great produce-pack programs in the area, such as Foot Print Farms or Up in Farms Food Hub. Many of the best local restaurants are also taking up the farm-to-table torch, so we can find things that are good for us and good for our local economy even when we eat out.

Mississippi has so much great, healthy food already, and I'd love for the rest of the world to realize that we're not just cupcakes, sugar water, grits and danger.

Why don't we start celebrating our food instead of submitting to it?

Music Editor Micah Smith is married to a great lady, has dog-children named Kirby and Zelda, and plays in the band Empty Atlas. Send gig info to [email protected].