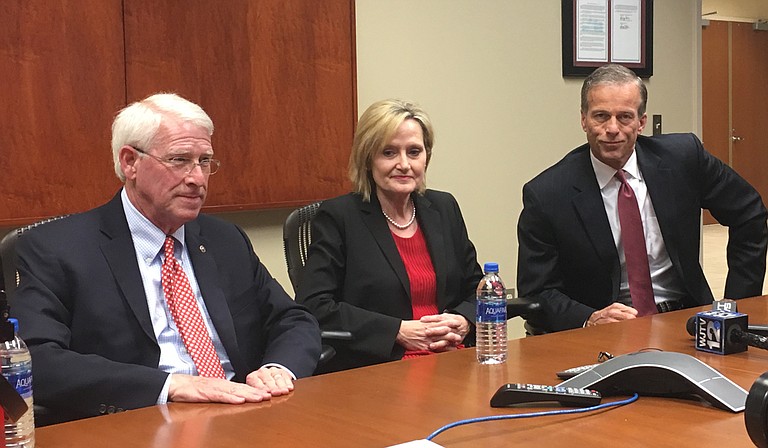 Sen. John Thune (right) from South Dakota joined U.S. Sens. Roger Wicker (left) and Cindy Hyde-Smith (center) on Tuesday, May 1, in Ridgeland. Thune came down to campaign for Wicker who is in a primary election June 5 for his seat. Photo by Arielle Dreher.

JACKSON — Republican U.S. senators are concerned about the makeup of their chamber, which currently gives their party a slight edge in Congress by a one-vote margin. The stakes on Mississippi's Senate races, consequently, are quite high.

Sen. John Thune, R-SD, made the trip to Mississippi this week to campaign for Sen. Roger Wicker during a short recess. Thune spoke to Madison County Republicans at a private roundtable and gala event on May 1. Thune, Wicker and newly appointed Sen. Cindy Hyde-Smith sat down with reporters on Tuesday before the fundraisers began.

"We have two Senate races in Mississippi this year, and both (seats) we need to hang on to if we're going to hang on to our majority, which I think is critical for the future of our country," Thune said at the C-Spire building in Ridgeland May 1.

"I've talked to business owners in Mississippi who are actually giving raises, so I think it's helping a lot of families here," Hyde-Smith, who plans to promote President Donald Trump's agenda as she campaigns, said.

Wicker will be on the ballot in June in the GOP primary election against Richard Boyanton. Hyde-Smith, who filled former Sen. Thad Cochran's seat, will run in the special election in November. That race has no primary election, and five Mississippians have qualified to run.

Senators cast doubt on any immigration reform happening this year, after several proposals died in February.

Hyde-Smith said she looks forward to establishing legislatively driven immigration rules in the Senate but doubted the Senate's ability to pass something before November.

Thune agreed, noting that even the proposal to give Deferred Action for Childhood Arrivals, called DACA, recipients legal certainty in exchange for Trump's border wall is a short-term proposal. He said a longer-term plan for immigration reform needs to be addressed but likely will not come up until next year, at least.

"I thought it was a workable solution, and it strikes me as strange that our Democratic friends on the left would vote against that solution, having advocated for it for years and years for some relief for the Dreamers," Wicker said. "It might make some conclude that we've become over-politicized in Washington, D.C."

Several of Wicker's GOP colleagues actually voted against Trump's proposal, however. The bipartisan DACA-border wall proposal failed by a vote of 52-47 and needed 60 votes to pass, Vox reported.