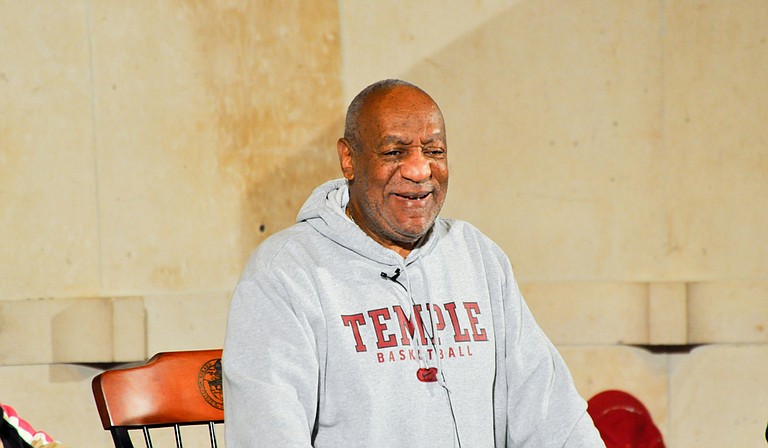 A day after Hollywood's first Oscars of the #MeToo era, Bill Cosby went to court Monday in a bid to get his sexual assault case thrown out—or at least stop some of his dozens of accusers from testifying at his retrial. Photo courtesy Flickr/The World Council Affairs of Philadelphia

NORRISTOWN, Pa. (AP) — A day after Hollywood's first Oscars of the #MeToo era, Bill Cosby went to court Monday in a bid to get his sexual assault case thrown out—or at least stop some of his dozens of accusers from testifying at his retrial.

Cosby's retooled defense team, led by former Michael Jackson lawyer Tom Mesereau, argued that telephone records, travel itineraries and other evidence show the alleged assault couldn't have happened when prosecutors say it did and thus falls outside the statute of limitations.

The defense disputed accuser Andrea Constand's testimony at Cosby's first trial last year that the 80-year-old entertainer drugged and molested her at his suburban Philadelphia home some time in the first part of January 2004. Constand didn't give a specific date, but said the incident had to have happened prior to Jan. 20, when her cousin moved into her Philadelphia apartment.

Cosby's lawyers told Judge Steven O'Neill on Monday they've found evidence that Cosby wasn't even in Pennsylvania during that time. Constand testified she would have called Cosby to be let into his home, but his lawyers said her phone records don't reflect such a call within her timeframe.

The date is important. Cosby was arrested on Dec. 30, 2015, meaning any encounter prior to Dec. 30, 2003 would have fallen outside the 12-year statute of limitations.

Even before the arguments got underway Monday, Cosby's lawyers were rapped by the judge for falsely accusing prosecutors of hiding or destroying evidence.

The defense withdrew the allegation days later after his former lawyer said he confirmed being aware that the prosecution interviewed the woman before Cosby's first trial.

The DA argued Cosby's lawyers acted recklessly and "are at best incompetent and otherwise unethical."

O'Neill, who presided over Cosby's first trial, said he was reluctant to break up Cosby's legal team with his retrial looming. But he added the defense lawyers were essentially "on notice."

Cosby, who entered the courtroom on the arm of his spokesman, is charged with drugging and molesting Constand at his suburban Philadelphia home. Cosby said the encounter was consensual. A jury deadlocked on the case last year, setting the stage for a retrial.

If the defense loses its bid to have the charges tossed, Cosby's lawyers are trying to limit the number of accusers who can testify.

Prosecutors have raised the prospect of calling as many as 19 women to the witness stand, including model Janice Dickinson, in an attempt to show a sinister flip side to Cosby's public persona as "America's Dad," cultivated through his role as an affable Jell-O pitchman and the star of the top-rated 1980s family sitcom "The Cosby Show."

Prosecutors allege the assault on Constand was part of Cosby's five-decade pattern of drugging and harming women.

Cosby's lawyers argue that some of the other accusers' allegations date to the 1960s and are "virtually impossible to defend against." They said they would seek to delay the retrial if any of the women were allowed to testify so they could have more time to investigate their claims.

The judge allowed just one other accuser to take the stand at Cosby's first trial, barring any mention of about 60 others who have come forward to accuse Cosby in recent years.

The only other hint that jurors got of Cosby's past came from deposition excerpts from 2005 and 2006 in which the star admitted giving quaaludes to women he wanted to have sex with.

Jury selection in the retrial is slated to begin March 29.

Monday's hearing comes just 10 days after Cosby's 44-year-old daughter, Ensa, died of kidney disease. His lawyers have given no indication they would seek to delay the hearing or his retrial.

In January, Cosby emerged from a long period of near-seclusion to have dinner with friends at a restaurant and give his first comedy performance in more than two years. Legal experts said the nights on the town appeared to be an effort to rebuild his good-guy image.

Cosby has pleaded not guilty to charges he drugged and molested Constand, a former Temple University women's basketball official, at his suburban Philadelphia home. He remains free on bail.

The Associated Press does not typically identify people who say they are victims of sexual assault unless they grant permission, which Constand and Dickinson have done.