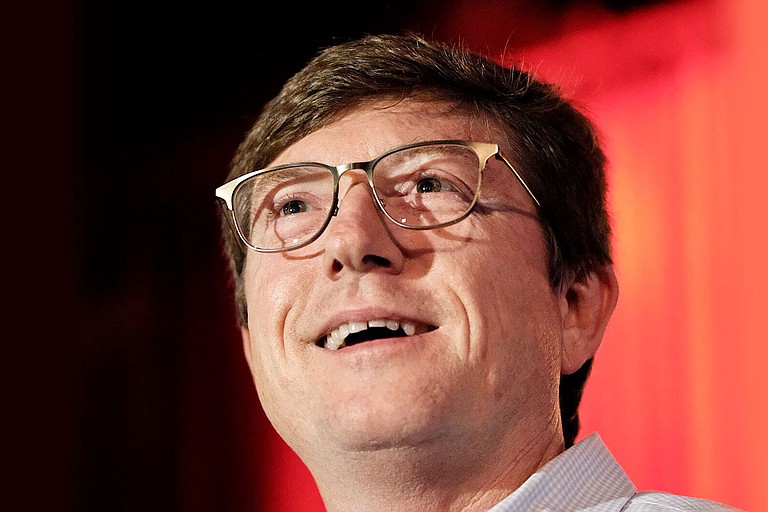 JACKSON — With his family by his side, Rep. David Baria, leader of the Mississippi House Democratic Caucus, declared victory in his bid for the Democratic nomination for U.S. Senate, at Murky Waters in Gulfport, on Tuesday night after the announcement of the results of the primary run-off.

"We were outspent by our opponents something like four-to-one," Baria told a crowd of around 60 supporters gathered at Murky Waters BBQ in Gulfport. "But money does not buy Mississippi, folks."

Baria defeated Democratic opponent Howard Sherman with 58.5 percent of the votes in Tuesday's runoff election, after placing a close second to Sherman in the June 11 primary.

Howard Sherman (right) and his wife, acclaimed actress and Meridian native Sela Ward (left), arrived at the restaurant to accept the runoff defeat after the Associated Press called the election. The couple acknowledged sting from what they described as dirty politics.

Sherman and his wife, acclaimed actress and Meridian native Sela Ward, arrived at the restaurant to accept the runoff defeat after the Associated Press called the election. The couple acknowledged sting from what they described as dirty politics.

"It was a tough race," Sherman said. "Facts about my past were mischaracterized."

After defeating Sherman, Baria will face incumbent Republican Sen. Roger Wicker in the November general election. Throughout his primary campaign, Baria emphasized his support for criminal justice reform, the protections of the Affordable Care Act, Medicaid expansion and equal pay for women.

Baria said he made the decision early on to run an authentic campaign as an unapologetic Democrat, not as "Republican-lite."

"We decided at the beginning to run the campaign we wanted to run," Baria said. "We didn't want to be middle-of-the-road, trying to run away from who we are and what we stand for, so we decided to do this the way we wanted to do it."

Throughout Sherman's campaign, questions persisted about his commitment to the Democratic Party. Sherman, a California native, donated cash to Republicans, including Wicker. Sherman said he supported Wicker when the Tea Party Republican Chris McDaniel planned to challenge the senator.

Although Sherman said he has no plans to support Wicker in the general election, the Democrat said he's not ready to make an endorsement for Baria.

David Baria hugs his daughter, Merritt Baria, after learning he won the run-off.

Looking toward November, Baria said Wicker's millions of campaign dollars and the 24 years he has spent in Washington, D.C., doesn't faze him. "But I ain't scared," Baria said. "Because every time I've been involved in a campaign, I've been the underdog. I've been outspent two or three to one, and we've come out on top every time."

While admitting that this is his first statewide race, Baria said he feels "confident" going into November. "I'm ready for this fight. I'm eager for this fight. And with you folks on my side, we're going to win this fight in November."

Not long after Baria's win was announced, Wicker's office released a statement congratulating Baria and adding that he "looks forward to seeing him on the campaign trail." Baria will face Wicker in the general election on Nov. 6, 2018.

In the other primary run-off, Rankin and Madison counties District Attorney Michael Guest earned the Republican nomination for the Third U.S. Congressional District. He will face Democratic nominee Michael "Ted" Evans in November. Read the article about the race here.