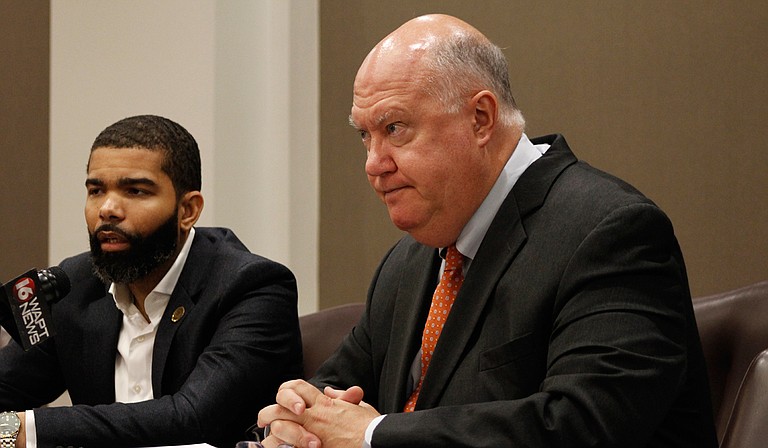 In Public Works Director Bob Miller's short time as the highest-paid city official in Jackson, he has had to sway the city council on a growing number of occasions to give him emergency funding. The June 18 work session was no different.

As a man who dots his language with both colorful metaphors and precise numbers, Miller deferred to the latter during the session to express dire shortages in his department he needs to fill with contractors, he says, or there could be federal consequences.

The sewer department has 35 vacancies, the water department has 25, and Miller is down to just a handful of crews in each of those fields. There are just under 10 sewer system failures in the City, 82 water system breaks and leaks, some of which Miller has to let run because no one is able to get to them all with so few people on staff. Jackson averages about two to three new leaks per day, he said.

"First and foremost, it is an emergency circumstance because our sewage system is crumbling all around us, and we're not able to keep up with the repairs," Mayor Chokwe A. Lumumba said Monday.

Miller spoke of 50 identified sites with collapsed sewer lines, most of which could overflow in wet weather. Another 40 could collapse soon.

The City Council, however, did not accept Miller's emergency item at the June 19 meeting to hire Hemphill Construction Company Inc., Utility Constructors Inc., and Delta Constructors Inc. for one-year term bids to do work on sewer and water projects as needed for up to $5 million in each department.

At a second City Council meeting on June 20, the four present councilmembers approved the contracts. The companies will do small and large repairs to support public-works crews spread so thin already. Miller's crews work 10- to 12-hour days, and some as long as 16 hours, he said. However, of the projects Miller identified at the Wednesday meeting, the City will not be able to afford to fix all of the sewer problems this fiscal year.

The main necessity for the subsequent council meeting was because Ward 6 Councilman Aaron Banks refused to support the contracts. The council had to reach a unanimous consensus Tuesday night because Miller was adding it to the agenda as an emergency item.

Banks threw the axe in the plan, however, because he wanted line items that identified the work the contractors would handle and he felt the agreement was too open-ended as it stood.

At the June 20 meeting, when Miller presented a list of sewer-maintenance work awaiting work to date, Banks seemed pleased, although still wanted more information about the Environmental Protection Agency.

On June 19, the mayor informed the council that his administration has to divulge the council's decision about fixing the sewers to the Environmental Protection Agency on Thursday.

"The EPA is critically concerned about our ability to govern and what barriers will be created there. That is very important for us to consider," he said. "This is a very pivotal decision that we're approaching right now. We all know that we're under a consent decree."

Councilman Banks felt that "the story" kept changing and that the EPA requirements should have also been put in writing in the proposals to the City Council. 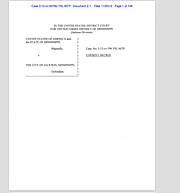 Nothing changed Banks' mind Tuesday night, however, even after the mayor brought in Keyshia Sanders of Constituent Services to explain the system-wide failures she sees and hears about daily. She said citizens threaten to call the Mississippi Department of Environmental Quality and the EPA about their concerns on a daily basis.

"As we continue to move forward on this, it is always a moving target...we think potholes is a big issue in terms of infrastructure, but our water and sewer is our biggest issue right now, and sewer is the main priority," Sanders said before the council.

Banks' colleagues' pleas to go through with these contracts didn't stir him either.

“We’re being penny wise and pound foolish to wait for the perfect solution to address these problems that only get worse if they aren’t addressed immediately," Ward 1 Councilman Ashby Foote said.

The rest of the council, save for Ward 3 Councilman Kenneth Stokes who was in and out of the chambers and Ward 2 Councilman Melvin Priester Jr who was absent, was ready to approve the contracts. Ward 4 De'Keither Stamps seemed like he would have been on board if the City could prove work would happen in Ward 4.

"I just want to see what work would be done in my Ward—that's really all I care about," Stamps said. "You want to spend $5 million dollars, what in Ward 4 is going to get fixed? I'm not worried about the contractors, who the contractors are."

This was the second time this month the council debated on bringing these companies in to do repairs in the City. Ahead of the city council meeting on June 5, the body took issue with the $23-million estimates for potential work from each of the companies. Miller told the Jackson Free Press that he put a lot of estimated quantities for upcoming work in these contingency contracts, which is how the companies arrived at $23 million. The bids have not changed, he said, adding that his department is just promising not to spend more than $10 million total on sewer and water maintenance work over the next year.

This time, Miller presented an option that would be less overall money to contractors and the companies will have to adhere to the City's equal-business opportunity ordinance. But, it wasn't enough.

Between April 1 and May 18, Jacksonians made 164 calls to 3-1-1 about outdoor sewer leaks mainly near their homes. More than half of those cases were pending as of May 18, including pleas for raw sewage to be removed from citizens' backyards and driveways.

Part of the delay in closing cases is because the Department of Public Works has trouble hiring. The City's wages are not competitive for the job requirements. While hiring contractors can be more expensive, Miller says it is the only option until the City raises wages.

"I simply have to have more resources," Miller told the city council on Monday.

The City also is at risk of violating the stipulations of the 2012 consent decree with the Environmental Protection Agency and Jackson's requirements to adhere to the Clean Water Act after illegally dumping untreated wastewater into the Pearl River.   In 2012, the EPA found that the City had at least 2,300 unauthorized sewer overflows in five years' time.

Chief Administrative Officer and Interim Director of Finance Robert Blaine attended a recent meeting with Miller at the Atlanta-based EPA office to renegotiate the terms of the consent decree. Blaine stressed that he consent decree places the City under constant monitoring, and said not acting on collapsed sewers brings Jackson closer to being in violation.

"I know that he is trying hard not to be alarmist, but I'm going to ring the bell—it is an emergency situation," Blaine said.

Councilman Banks, who routinely advocates for minority contractors, suggested Miller do the normal bid process or even put out for emergency bids rather than keep the three big companies on retainer.

Miller promised to launch a contractor-development program to give local and minority-owned businesses more of a shot at obtaining larger contracts. However, the public-works director does not want to go through a normal procurement process because that could leave citizens 60 to 120 days away from getting relief from foul odors, and emergency bids often cost more.

"When we do emergency contracts we have a tendency to have to accept whatever pricing we get ...," Miller said. "I've often said that this is the type of thing that you do at leisure so then you don't have to pay a premium price in haste."

Ward 7 Councilwoman Virgi Lindsay urged her colleagues to go through with this because of how many calls she gets from constituents with broken sewer lines and complaints of the odors around them.