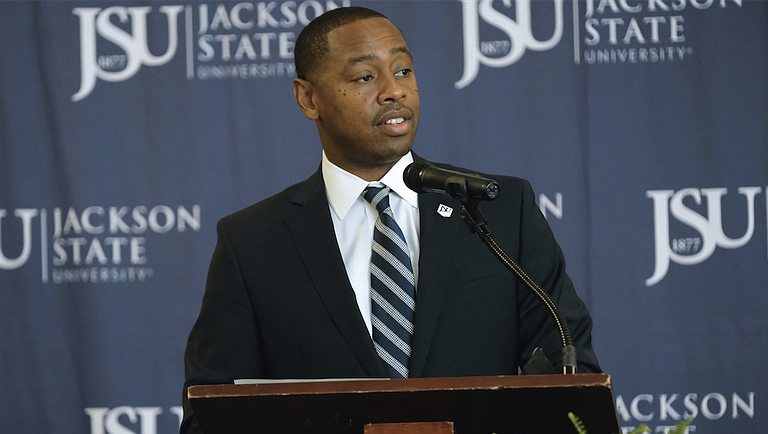 The Jackson native previously served as director of athletics at Prairie View A&M University beginning in June 2013, and became vice president and director of athletics at Prairie View in November 2016. While there, he oversaw upgrades to the Tankersley Field baseball facility, the opening of a new administration building for the athletics department, and the installation of a new high-definition message board, grandstand and press box.

Robinson, a graduate of Mississippi Valley State University, served as athletic director at his alma mater in 2012 before going to PVAMU. He has also previously been the academic coordinator at Delaware State University in Dover and as the Southwestern Athletic Conference's assistant commissioner for compliance, helping to enforce conference bylaws, among other tasks.

Robinson is currently chairman of SWAC's Athletic Directors Committee and will also take up the mantle of vice president of the Football Championship Subdivision Advisory Committee later this summer.

Jackson State University is hosting pilot and educator Barrington Irving in the auditorium of the College of Science Engineering and Technology today, June 8, for a full day of the "Flying Classroom" program.

Irving and a team of science, technology, engineering and mathematics education professionals will work with more than 150 middle-school students throughout the day on projects that focus on autonomous engineering, drone technology, biomedical science, and three-dimensional printing.

The students taking part in today's event are part of the Verizon Innovative Learning Minority Male Program at JSU. The university is one of 16 sites across the country involved with the summer initiative, which partners with historically black colleges and universities to instruct male students of color in STEM disciplines five days each week for three weeks. The Flying Classroom is a collaborator with the program and brings technology to teach students.

Irving, who was born in Kingston, Jamaica, and raised in Miami, was inspired to pursue a career in aviation at age 15 after meeting a Jamaican airline pilot named Gary Robinson, who then served as his mentor.

In 2005, he founded a nonprofit organization called Experience Aviation, which aims to introduce young people to career opportunities in aviation and STEM-related fields. In 2006, he opened the EA Learning Center in Miami, which provides middle- and high-school students with STEM programs and career guidance.

In the following year, at age 23, Irving became both the first African American pilot to fly unaccompanied around the world, as well as the youngest pilot to accomplish that feat. He made his 30,000-mile journey over the course of 97 days in a plane named "Inspiration."

In September 2014, he flew to Australia and 12 countries in Asia, Indonesia and North America on a series of 16 land, air and sea expeditions to explore real-life applications of STEM subjects, as well as history, geography, social studies and language arts. That same year, he launched his online Flying Classroom program, which uses the lessons from his expeditions as the basis for a STEM integration course for educators to use in the classroom.

The Watson-Brown Foundation and the Society of Civil War Historians give out the $50,000 award each year to an author whose work provides original contributions on the Civil War. Lang will formally accept the honor at the annual Southern Historical Association meeting in Birmingham, Ala., in November.

He studied history at the University of North Texas, earning his bachelor's degree in the subject in 2005 and his master's degree in 2008. He received his doctorate in history from Rice University in 2013, and his book is based on his doctoral dissertation.

"In the Wake of War" is part of "Conflicting Worlds: New Dimensions of the American Civil War," a book series from Louisiana State University's LSU Press. Baylor University professor T. Michael Parrish, who is the editor for the series, also served on Lang's dissertation committee.