OPINION: The Big Flood of the Pearl, Not If, but When 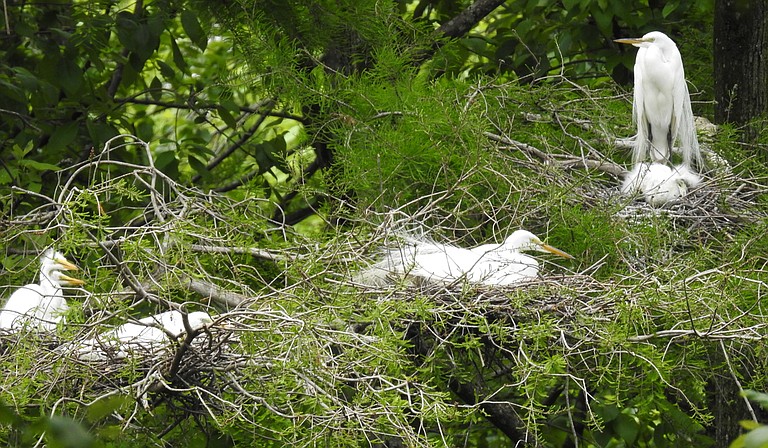 Great egrets are one of the species that call the Pearl River home. Will Selman

Settlers originally founded Jackson in the early 1800s on Lefleur’s Bluff, the highest bank of the Pearl River in the region. They didn’t have the technology or the data we have today to understand river flows, but they did know one thing: rivers flood (technically, a flood is when a river rises beyond its normal banks to inundate dry land).

Many proponents for flood-control structures like the “One Lake” project say river flooding is unpredictable. This is inaccurate. Data support this, as the Pearl River has flooded (Flood discharge in Jackson is ~20,000 cubic feet per second) almost once every year from 1960 to 2018, usually between November and May. However, predicting the magnitude or severity is harder, mainly because of localized rainfall events.

This explains a lot about the settlers’ choice of Lefleur’s Bluff. See, along with being close to the Pearl River and Natchez Trace, the area is the highest point near the Pearl River. Settlers instinctively knew that the highest ground was the best place for a town, regardless of the flood magnitude.

However, since the early 1900s, the development of Jackson, Pearl, Richland and Flowood has moved down the hill and into the Pearl River’s floodplain where early settlers knew it would flood. Many development areas brashly encroach the floodplain, almost as if they are thumbing their nose to the mighty Pearl River. These include flood-prone areas that are both commercial and residential properties (e.g., lower High Street, Lakeland Drive, the Eastover area of north Jackson and Fondren area around Eubanks Creek).

When floodplain areas are developed, not only are places, people, dwellings and businesses in the next big flood’s path, but it also leads to wetland losses (also known as the flood's "sponge"... See “A Pearl of Great Price: The Value of a Flowing Pearl River in Jackson”). Development also increases coverage of impervious surfaces like concrete. These surfaces lead to faster run-off, and this accelerates flooding.

The Easter Flood of 1979 was record event for the Pearl River in Jackson, and it cost the city and its residents $1.7 billion in damages in today’s dollar value. But now it seems like a distant memory, and development has continued at a faster pace in the floodplain. The “One Lake” project proposes to develop it even more, and this will put additional people and structures in the path of the mighty Pearl. The project will put Jackson and surrounding municipalities in a much more precarious position than in 1979.

So the big question is, “Will the ‘One Lake’ project be the salvation for Jackson in the event of a massive flood like the Easter Flood of 1979?” Not likely. The project is tiny at only 1,500 acres. Some examples in Mississippi are Grenada Lake (more than 90,000 acres) and Sardis Lake (more than 98,000 acres) and both of these lakes even dwarf the reservoir (more than 30,000 acres). Most flood-control lakes are massive and have huge capacities for water storage. “One Lake” won’t be able to deliver on its flood control promises because it cannot store nearly the volume of water needed during a massive rain event.

One can only look at the massive flooding that happened in east Baton Rouge and Denham Springs in 2016 to see the effects of unpredictable massive rainfall events. The region north and east of Baton Rouge received more than 2 feet of rainfall in two to three days, and this equated to 7.1 trillion gallons of water in a one-in-1,000-year event. The Amite River crested almost 5 feet above its previous record—not 5 inches above its previous record, but 5 feet. There was a similar event in 2017 when Hurricane Harvey inundated much of the low-lying Houston metro area when the hurricane stalled southwest of the city.

So what would happen if we had a similar rainfall event, let’s say a tropical storm that stalled around Jackson, dumping 20 to 30 inches of rain in the upper Pearl River Basin? I could imagine a scenario where flooding is much greater than in 1979, and this would inundate most of the low-lying areas mentioned above and more. Regardless of the exact scenario, no flood-protection measure would ever be able to protect low-lying areas from such a massive event.

At the same time we are considering construction of “One Lake,” there is a major movement throughout the United States to remove dams on rivers, not build them. State and municipal governments are learning that they are very costly to maintain and often cause more environmental harm than anticipated. Therefore, an alternative to the construction of “One Lake” would be the development of a greenway and floodway to border the Pearl River. Greenways and floodways are undeveloped, natural areas along rivers, and they often have parks, outdoor viewing opportunities, and walking and hiking trails.

The Jackson area currently has three major properties already in place to anchor such a system: the Fannye Cook Natural Area, Lefleur’s Bluff State Park, and properties that the Pearl River Valley Water Supply District owns. To connect these three properties, people could acquire adjoining ones, especially those with a high flood risk. Developing a greenway and floodway could benefit all metro residents, and if planned and marketed correctly, it be an ecotourism draw for visitors. So rather than trying to beat the river, this would allow us to work with the river.

We must learn from the original settlers of Jackson: build on the high ground and avoid developing the floodplain. The Pearl River is strong and quite predictable. … It is going to flood. However, we don’t know the magnitude of future floods, so it is possible that another big one will happen. The best course of action is to give the floodplain forest back to the Pearl River, and the wildlife and fish species that call it home. Making a greenway and floodway is the best solution to resolve Jackson’s flooding woes, not “One Lake.”

Will Selman is an assistant professor of biology at Millsaps College. This column does not necessarily reflect the opinions of the Jackson Free Press.

Read more stories about the Pearl River and the One Lake project at jfp.ms/pearlriver.