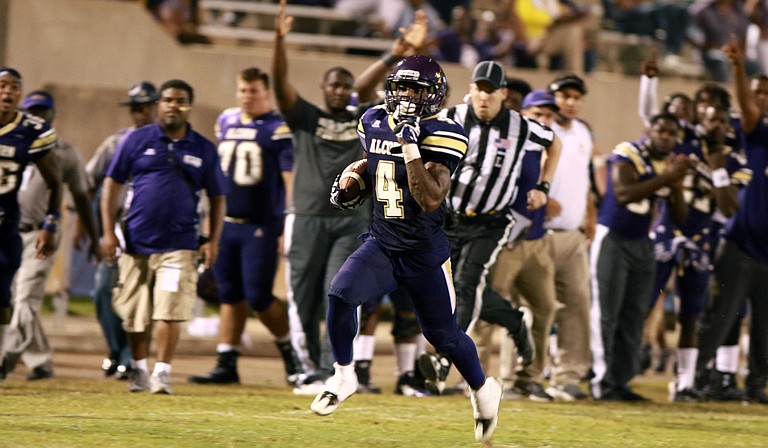 It doesn't look like the university will be ready to give up its division stranglehold any time soon, as the Braves were again named favorites to win the East at the SWAC Media Day on Friday, July 13. If they want to win a fifth-straight division title, senior running back P.J. Simmons will have to live up to his lofty new title as this year's SWAC Preseason Offensive Player of the Year.

In his junior season, he backed up 2017 First-Team All-SWAC running back De'Lance Turner, who led the conference in rushing with 1,355 yards on 181 carries over 11 games. Meanwhile, Simmons played in 11 games and amassed 687 yards on 80 rushing attempts, also scoring seven touchdowns. Those numbers were good enough to put him at sixth place in the SWAC and second for the Braves in rushing.

Heading into the 2018 season, Turner is gone, and Simmons is set to shine after finally having a breakout season as a college player.

Before attending Alcorn, he was a star running back at Amos P. Godby High School in Tallahassee, Fla., rushing for 1,843 yards and 20 touchdowns as a senior. He also had 347 receiving yards on 25 catches with two touchdowns that year.

As team captain, he helped lead Godby to a runner-up finish in the team's confernce tournament, and he was named All-State at the end of his high-school career.

Simmons, whom Scout.com named a three-star recruit, signed with Kent State University after high school but spent only the 2015 season with the Golden Flashes. He rushed for 76 yards on 13 carries and made 17 receptions for 115 yards before leaving for Holmes Community College.

During his 2016 season for the Holmes Bulldogs, Simmons rushed for 289 yards on 39 carries with four touchdowns. He added 162 receiving yards on 13 catches, returned 22 punts for 146 yards and had one kickoff return for 22 yards. The Tallahassee native then left Holmes after just one season to join Alcorn State.

Despite that, SWAC coaches and media representatives predicted that the Delta Devils will finish last in the East Division and the Tigers will finish third. They selected Grambling State University to finish first in the West Division.