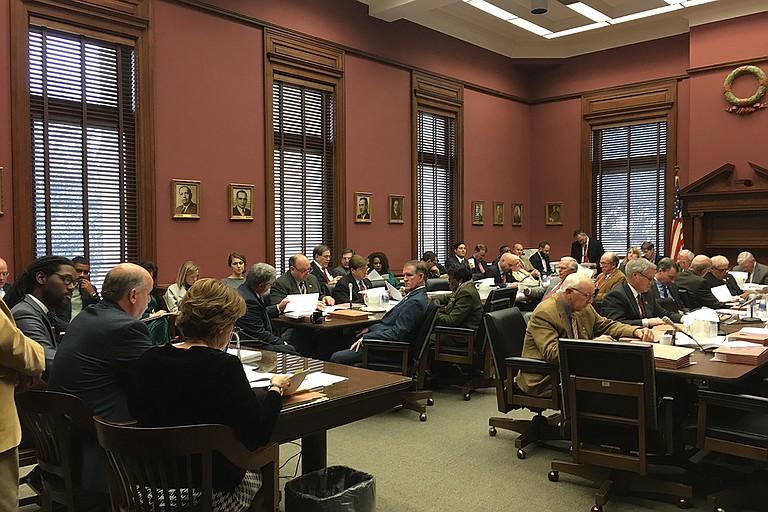 The House Appropriations Committee passed House Bill 957, which contains a new education formula, on Tuesday, Jan. 16. The full House is expected to consider and pass the bill this week. Photo by Arielle Dreher.

JACKSON — As snow swirled outside on Tuesday, Jan. 16, the Mississippi House of Representatives Appropriations Committee passed House Bill 957, which aims to rewrite the State's education-funding formula, the Mississippi Adequate Education Program. The House is expected to take up the measure this afternoon.

The new formula, called the Mississippi Uniform Per Student Funding Formula, or the UPS formula, would take effect next school year. The proposal would increase the base cost for each student to $4,800, but in the long run, it calls for less funding than MAEP. Over a seven-year period, Republican leaders want to add roughly $107 million to the new formula, still millions short of full funding, according to MAEP standards.

Thirty-five school districts would lose state funding eventually, data from EdBuild show, while the rest of the state's 148 districts would receive more funding, with DeSoto County Schools receiving the most additional funds at $19.8 million.

“MAEP is an unrealistic formula,” he said, saying the new formula is one that lawmakers can meet, noting the plan to increase funding by more than $100 million in seven years.

“Hopefully, we’re going to have new growth, and we won’t have to look for new money anywhere,” he said Monday.

Bennett told representatives that under the new formula, school districts will be “held harmless” for the first two years, meaning they will not receive less than they are currently under MAEP for two years. However, if districts lose students, they will lose funds as they do under the formula now.

When Bennett presented the bill again to the Appropriations Committee on Tuesday, Democrats raised several concerns about the legislation, noting that Gunn’s legislation does not eliminate or even address the "27 percent rule."

Eliminating the "27 Percent Rule," which diverts nearly $120 million to 53 school districts across the state, could generate more funding from those districts to go into the new formula. Under the Mississippi Adequate Education Program, those 53 districts are not required to contribute more than 27 percent of their total school funding, even if they are financially able. Lawmakers wrote the loophole into MAEP.

EdBuild Chief Executive Officer Rebecca Sibilia reiterated to Democrats when she met with them last week that the rule is one of the most inequitable parts of how schools in the state are currently funded.

Bennett said removing the rule would make too drastic of changes to school districts, and said it would not be fair. On Tuesday, Rep. David Baria, D-Bay St. Louis, asked about removing the rule gradually instead of just cutting it entirely.

“Without the 27 percent rule going away, are we achieving the purpose of more equitable funding in our schools throughout the state, or do we need to make sure that we figure out a way to phase that '27 percent rule' out?” he asked.

Bennett committed to looking at the "27 percent rule" in the next two years.

Baria also presented an amendment that would delay the new formula from going into effect until 2020, giving lawmakers two years to study the EdBuild recommendations and implement them.

“This is a once-in-a-generation re-write of the largest component of our budget, and I think we would be better served if we took two years and figure out how we can follow the recommendations of these folks from New Jersey that we paid a lot of money to,” he said.

Republicans rejected his amendment mainly on the premise that EdBuild’s proposal offers more simplicity and had been out a year already. However, lawmakers are likely to cherrypick parts of that proposal, which EdBuilds warns would be a mistake.

Sen. Hob Bryan, D-Amory, who helped author MAEP and listened in on the Monday hearing on the new formula, points out that this process is very different than the public hearings that took place when lawmakers passed MAEP.

“To say that this bill, which is absolutely not the New Jersey (EdBuild) proposition, has been around for a year is malarkey,” Bryan told reporters Monday. “It did not even exist until Thursday, at least not that any public person could have seen.”

The Senate has mostly stayed quiet on the education formula re-write, and when Senate Democrats invited Sibilia and the EdBuild team to do an open meeting with about the legislation this week, Minority Leader Sen. Derrick Simmons, D-Greenville, tweeted that Lt. Gov. Tate Reeves objected to the idea.

Bryan said Republicans are rushing the legislation through the process because the bill cannot stand the light of day.

“The reason they are operating in the darkness, the reason they haven’t had any public meetings, and the reason they’ve got to ram the bill through before anybody has a chance to find out what it really does is that quite simply, it cannot stand the light of day—the bill is a vampire,” Bryan told reporters.

The House of Representatives is expected to vote to scrap MAEP in favor of Gunn’s new funding formula as early as this afternoon at 2 p.m.