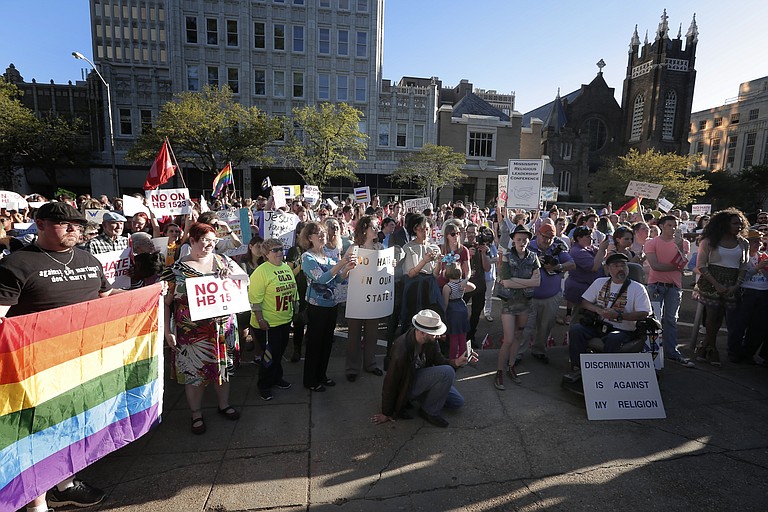 On Monday, Jan. 8, the U.S. Supreme Court decided not to review legal challenges to House Bill 1523, the "Protecting Freedom of Conscience from Government Discrimination" Act that the Mississippi Legislature passed in 2016. Photo by Imani Khayyam.

JACKSON — Opponents of LGBT rights in Mississippi enjoyed a legal victory this morning when the U.S. Supreme Court announced it would not review a challenge to the controversial House Bill 1523, which Gov. Phil Bryant signed into law in April 2016. The high court decided not to review disputes over the constitutionality of the "Protecting Freedom of Conscience from Government Discrimination Act," which predominantly Republicans in the Mississippi Legislature passed in 2016.

HB 1523 defines and protects three religious beliefs and moral convictions: Marriage is a union of one man and one woman; sexual relations are reserved for such a marriage; and "male" and "female" refer to an individual's "immutable biological sex as objectively determined by anatomy and genetics at time of birth."

The law "protects" Mississippians who hold those beliefs from "discriminatory action," allowing circuit clerks to recuse themselves from issuing marriage licenses and and employers to make hiring or leasing decisions based on their sincerely held religious beliefs or moral convictions.

Several Mississippians challenged the law in federal court. In July 2016, U.S. District Judge Carlton Reeves ruled that the law would violate the Establishment and Equal Protection Clauses in the U.S. Constitution.

Bryant appealed, however, and the 5th U.S. Circuit Court of Appeals reversed the lower court's ruling. House Bill 1523 became law in summer 2017, when the 5th Circuit denied plaintiffs a rehearing in the case. Attorneys in the Barber v. Bryant case appealed the 5th Circuit's decision to the U.S. Supreme Court.

"Unfortunately, the Court decided to pass on the opportunity to answer a critical question about who has access to justice in this country and how much suffering our most vulnerable have to experience before they can seek recourse in the courts, but we will continue to fight against HB 1523 on behalf of LGBT Mississippians and everyone in our state impacted by this draconian law," Mississippi Center for Justice Advocacy Director Beth Orlansky said in a press release.

Critics have called the measure the most sweeping piece of anti-LGBT legislation in the country, with anti-LGBT advocates nationwide hoping to use it as a model for blocking same-sex marriage and other legal rights.

"The government-approved beliefs outlined by HB 1523 target LGBT Mississippians and leave the state's most vulnerable in harm's way," Beth Littrell, an attorney at Lambda Legal, said in a press release.

Read more about HB 1523's journey from the statehouse to the courthouse at jacksonfreepress.com/hb1523.