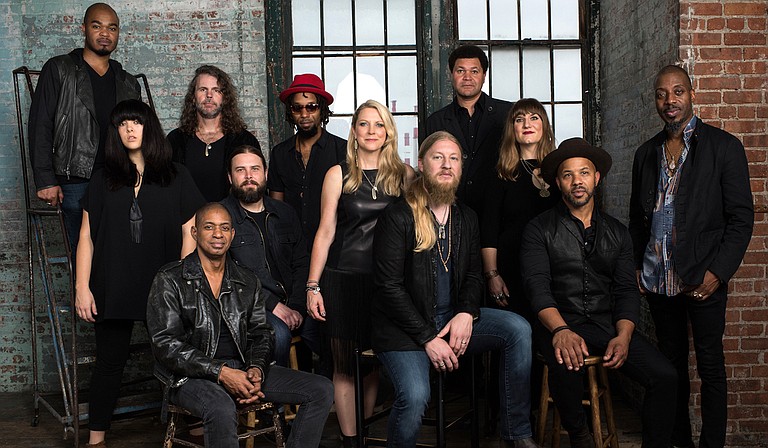 When Susan Tedeschi and Derek Trucks performed together on New Year's Eve in 2008, it was a normal day in many ways. The musicians had been married since 1999 and performed together on plenty of occasions between commitments to their solo careers, with Tedeschi being a five-time Grammy Award-nominated singer-songwriter and Trucks playing guitar with the Allman Brothers Band and his own group, the Derek Trucks Band.

After that night, however, they made the decision to focus their creative energy on a new project with both musicians at the forefront. Two years later, they played their first show with the Tedeschi Trucks Band at the Savannah Music Festival in Savannah, Ga.

Since then, the blues-rock ensemble has remained on the road while also releasing three studio albums, including its Grammy-winning 2011 debut, "Revelator," and two live records. The band's most recent release, 2017's "Live from the Fox Oakland," scored a 2018 Grammy nomination for Best Contemporary Blues Album.

The Jackson Free Press recently spoke to Trucks about his life as a musician and bandleader, and what he learned from making the Tedeschi Trucks Band's latest live record.

The band's 10th anniversary is still two years away, but this year will make a decade since you and Susan decided to officially start performing together. What's it like to reach that milestone?

It's surprising, man. The time flew. I mean, it still feels pretty new as a band, so that's a good thing. There's just a lot of musical ground being covered still, so it surprises me that it's been 10 years. But it comes quicker as we go.

What would you say is the biggest difference in the way you approach the group now compared to when you started?

You know, you learn as you go. You learn people's strengths and weaknesses, and that includes your own. You learn how to band-lead a little more as you go. But I think it's just really about following what works, and it's just little tweaks here and there that can change the course of the way the band feels and the way the band is playing. But you can never get complacent. I think that's one thing I keep re-learning. You always have to keep either changing the material or the arrangements or just how you approach things to keep it fresh for everybody. I mean when you have that many talented people onstage—especially people who are prone to improvising—you have to keep it fresh.

What's something you wish that you knew as a bandleader earlier on?

It's a lot of subtleties. It's really about learning the people that you're playing with, and I think every musician is entirely different. You know, sometimes, you maybe misread people out the gate or certain ways to approach things or play things, or sometimes, you just miss entirely. [Laughs] But I honestly wouldn't change a whole lot of it. I feel like all of the changes and ups and downs that go along, that gives you a story, that gives you something to play about and a common history as a band. The people who have been around the whole time, there's a lot to lean into when you're writing music, or just hanging and playing together. I think all of this stuff adds to the depths of what you're doing.

How does you and Susan being both married and dual bandleaders affect the band dynamic and how you write songs together?

You know, we occupy different roles and different space in the band, so it works pretty amazingly well. There's ups and downs with anything, but I think that was the thing that, going into it, we were most concerned about how we would make sure that dynamic would last. You don't want it to be something that tugs on the band too much. But I think it's made us better together, even when we're away from this, so we're pretty fortunate. I mean, it takes work, but you have to have the right personalities to begin with.

You've spent most of your life as a professional musician at this point. How has your approach to music changed for you as a performer?

Honestly, not a lot. I think the things you cared about in the beginning should be the things you care about going out, and I've been lucky to be around enough musicians where you learn those lessons early. I feel like if you change too much, at least in your intention, it's usually not for the better! [Laughs] I've noticed a lot of people, as their career goes along, they start making business decisions. You can always feel that shift, and once that happens, I don't really know of anyone who's come back from that.

That's one of the things I remember just early on where my dad always felt that way about music. Him growing up around Duane Allman and the Allman (Brothers Band), it was always the music first, and that's what mattered. And meeting someone like Colonel Bruce Hampton along the way, it was always, "What's your intention?" You can never let that slip. That's got to be a constant. I think we've been pretty stubborn about that the whole way through. You know, you'll experiment and try things. There was that crazy but great Quincy Jones interview that came out a few weeks ago, but there was one quote that stuck out—something to the effect of, "Once money enters the picture, God gets up and leaves the room." [Laughs] I was like, "That's about it!"

I know a lot of musicians who have made that decision, and you can feel it and hear it, and you just never unsee or unhear those things. We stay pretty adamant about just keeping your intentions right, so I think, in that sense, the way I felt about playing music from the beginning is the way I feel about playing now. When you have a good night, it feels good. When you miss reaching your bar, you feel sh*tty about it. [Laughs] That's every night. You don't necessarily judge on how many people are showing up or on crowd response. You judge it on (the fact) that you know when you're at your best and your purest, and you know when you're bullsh*tting. That's what you have to judge it on.

The band put out its second live album, "Live from the Fox Oakland," in March 2017. What made you decide it was the time to do that?

The band goes through these phases, and you can feel when there's a real shift in the way the band's playing. I feel like you reach new ground. Sometimes, it lasts for a few months, and sometimes it's just that the bottom rises up, but it's always nice to capture it when you get into those places. About a month or so before we did that live record, you could just feel the band getting into a really good place. We decided we would record the whole West Coast tour, and if we had a few nights that felt great, we would make it a record. There were three or four nights in a row that really kind of hit that spot for us, and we were lucky enough to capture one of those nights while it was being filmed, so it just really worked out. I'm not sure we were going to do all that from the same night if it wasn't as good as it felt to the band. Sometimes, you get lucky. You know, this band, we play a lot, so I feel like it's good to capture that every handful of records or every five or six years because there seems to be a lot of growth from year to year.

What is something that you learned from your first live record, 2012's "Everybody's Talkin'," that you wanted to apply on "Live from the Fox Oakland"?

I think any time you record a band that's big live, you just learn all kinds of things, whether it's which way you angle certain monitors onstage because it's blowing into the horn mic or there's just all kinds of weird recording sh*t you figure out. But more than anything, I learned that it's better to not stress the band and think there's any one night that has to be the record. It was nice that we had a week or so of shows we were recording the same way. So no one really had to know. [Laughs] They knew we were working on a live record, but no one had to overthink it, so everybody let loose (and) played the way we always play.

I think that's something you get better about as a band is not letting certain shows feel bigger than other shows, so every night, you're onstage with the same purpose. That's easier said than done a lot of times. If people know there's something on the line, they think about it a little differently. But you try to take that edge out a little bit.

What is it about recording a live album that is the most appealing to you?

You know, for me, I don't often go back and listen to things that we do live, so when we dig into picking which versions of tunes or which night, I listen to the band more then than I do any other time. Especially when we were mixing the record, I really got to appreciate what people onstage were doing that maybe gets lost in the moments, the subtleties. There was a few times where I would call out different people in the band, just out of appreciation for how badass they were. [Laughs] "I never noticed how good this section was," or there's just some little line that reoccurs that you never caught. It makes me really appreciate who we get to play with. Or maybe you hear some sh*t you do that you don't want to do anymore. [Laughs]