OPINION: Art and Politics in Mississippi 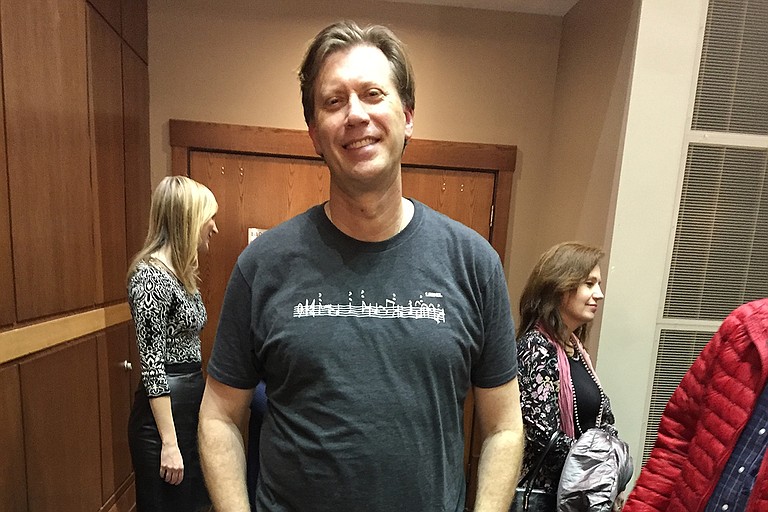 Jazz drummer and Birdland Big Band leader Tommy Igoe's enthusiasm was contagious. The hundreds in the audience at the Gertrude C. Ford Center were clapping, smiling, nodding to each other as the Grammy Award-winning New Yorker explained his music. Photo by Joe Atkins

OXFORD—Jazz drummer and Birdland Big Band leader Tommy Igoe's enthusiasm was contagious. The hundreds in the audience at the Gertrude C. Ford Center were clapping, smiling, nodding to each other as the Grammy Award-winning New Yorker explained his music.

"Charlie Parker is our hero up here," he said, referring to the saxophone-playing jazz giant who, along with trumpet-playing bandleader Dizzy Gillespie, helped create bebop jazz in the 1940s. "Rebels and renegades. He blew up the false set of rules on improvisation. He had many detractors as well as fans. If you want to blow something up, people are going to hate you."

As Igoe's 10-piece band prepared to do Parker's "Donna Lee," Igoe added, "The best music should have a little danger to it. We're keeping it way dangerous."

What followed was a rousing rendition of Parker's conversion of the old standard "(Back Home Again In) Indiana" to a bebop anthem. The band also played Gillespie's Latin classic "Tin Tin Deo," Count Basie's "The Deacon" and even some jazz-infused Steely Dan music.

A few days later, the Oxford Film Festival got underway featuring filmmakers and films from around the world as well as closer-to-home films such as "Dear Mr. Bryant," a plea to Mississippi's governor for tolerance, "Cowgirl Up" about a Mississippi cowgirl, and "Hand Made," a short feature about Vaughn woodwork artist Greg Harkins.

I wandered through it all with a recurring thought about the sharp contrast between artistic and political Mississippi. While the state is hosting and contributing to great music and film, many of its political leaders are voting "yes" to a bill that would allow citizens to carry guns on college campuses.

A few days before Igoe's band wowed his Oxford audience, news surfaced that the Department of Human Services had to return $13 million in federal funds aimed at providing child care for poor families. Mississippi, which along with local governments was able to hand Continental Tire a $650-million incentives package to build a plant in the state, couldn't come up with the matching funds needed to get the $13 million for poor children.

This is a state justly proud of its contributions to the nation's musical, literary and artistic heritage. A likeness of Nobel Prize laureate William Faulkner was on the cover of the Oxford Film Festival program this year. Very fitting as one of the best-known Big Screen renditions of a Faulkner story, "Intruder in the Dust" was filmed in Oxford and premiered in the city.

Country musician Marty Stuart recently announced he's going to develop a country-music museum and performance center in his hometown, Philadelphia, Miss. The museum will include Stuart's own personal collection of 20,000 artifacts such as Patsy Cline's boots, Johnny Cash's black suit and handwritten lyrics by Hank Williams.

"Mississippi is such a wellspring for so many different musical traditions for our country and for the world," the Smithsonian musical curator and adviser for the Stuart project, John Troutman, told the Associated Press.

Add a country-music museum to the Delta Blues Museum in Clarksdale, B.B. King Museum in Indianola, Grammy Museum in Cleveland, and, of course, Elvis' birthplace in Tupelo, and your next question is: Why not a jazz museum? Better known for its blues, Mississippi was also home to the great jazz bassist Milt Hinton (Vicksburg), pianist Mose Allison (Tippo), tenor sax genius Lester Young (Woodville), and modern-day jazz artists like singer-songwriter Cassandra Wilson (Jackson) and pianist Mulgrew Miller (Greenwood).

Yes, Mississippi loves and is rightly proud of its arts. Still, even with all that great jazz, country music, literature, and let's not forget painting and sculpture—from Theora Hamblett (Oxford) and Walter Anderson (Ocean Springs) to Wyatt Waters (Clinton)—many people first think of the blues when they think of Mississippi. The blues. Maybe the state's politics have something to do with that.

Joe Atkins is a veteran journalist, columnist and journalism professor at the University of Mississippi.