Trump Aide: Some Immigrants 'Too Lazy' to Sign Up for DACA 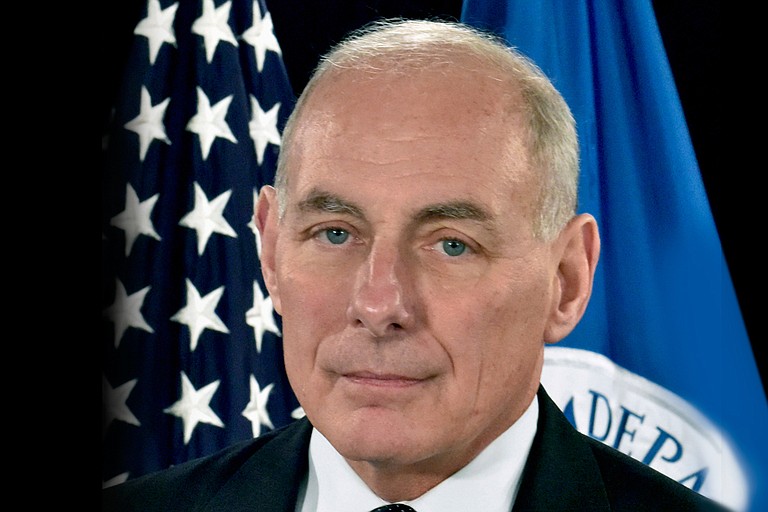 Some immigrants may have been "too afraid" or "too lazy" to sign up for the Obama-era program that offered protection from deportation, White House chief of staff John Kelly said Tuesday as he defended President Donald Trump's proposal aimed at breaking the impasse on immigration. Photo courtesy Official DHS Portrait

WASHINGTON (AP) — Some immigrants may have been "too afraid" or "too lazy" to sign up for the Obama-era program that offered protection from deportation, White House chief of staff John Kelly said Tuesday as he defended President Donald Trump's proposal aimed at breaking the impasse on immigration.

In remarks to reporters, Kelly described Trump's plan, which would provide a path to citizenship for up to 1.8 million people — more than Democrats had sought. He noted extension of the Deferred Action for Childhood Arrivals program was "beyond what anyone could have imagined."

"There are 690,000 official DACA registrants and the president sent over what amounts to be two and a half times that number, to 1.8 million," he said. "The difference between (690,000) and 1.8 million were the people that some would say were too afraid to sign up, others would say were too lazy to get off their asses, but they didn't sign up."

Kelly spoke as lawmakers have deadlocked in an effort to reach a bipartisan deal on protecting from deportation recipients of the program, known as "Dreamers." Barring a last-minute agreement — which seems unlikely — Senate Majority Leader Mitch McConnell, R-Ky., has said his chamber will begin considering the issue, a debate that GOP leaders expect to start next week.

Kelly said Trump would likely reject an effort to pass a short-term extension for the program, which is set to expire on March 5.

But he also noted the March 5 deadline may not have immediate impact. He said immigrants currently protected won't be priorities for deportation as long as they do not commit crimes.

"What makes them act is pressure," he said.

In exchange for making citizenship a possibility, Trump wants $25 billion for border security, including money to build parts of his coveted wall along the U.S.-Mexico boundary. He also wants to curb legal immigration, restricting the relatives that legal immigrants could sponsor for citizenship and ending a lottery that distributes visas to people from diverse places like Africa.

"I can't imagine men and women of good will who begged this president to solve the problem of DACA" would oppose Trump's proposal, said Kelly, using the program's acronym. He added, "Right now, the champion of all people who are DACA is Donald Trump."

A court ruling earlier this month also has blunted the deadline. A federal judge has indefinitely blocked Trump from terminating DACA's protections for the so-called Dreamers, who were brought to the U.S. as children and are living here illegally. The program shields them from deportation and gives them the right to hold jobs.

Still, many lawmakers are uneasy about what might happen to the Dreamers after March 5, and Democrats — and Trump himself — are using that uncertainty as leverage to help force a deal. Kelly's remarks seemed aimed at easing worries that major deportations of Dreamers could begin right away — a scenario that could be damaging to members of both parties.

"They are not a priority for deportation," Kelly said of Dreamers who've not accumulated criminal records.

He described a lengthy legal process that often takes years that immigrants in the U.S. illegally face before they are deported. He said an immigrant here illegally who doesn't commit crimes "never comes onto anyone's scope."

Kelly said he doubted "very much" that Trump would act unilaterally to extend DACA beyond March 5. He cited the administration's argument that former President Barack Obama exceeded his constitutional authority in initially creating it.

He also ruled out asking lawmakers to approve a short-term extension of the program. And he said he opposed one idea mentioned as a possible fallback should talks on a broader bipartisan compromise fail — a one-year extension of DACA in exchange for a year's worth of money for border security, including for building Trump's wall.

Trump said last September that he was ending the DACA program, complaining that Obama had overstepped his legal authority in creating it.

But while his 2016 election campaign was laced with anti-immigrant remarks, he's expressed sympathy for the Dreamers and he gave Congress until March 5 to pass legislation protecting them.