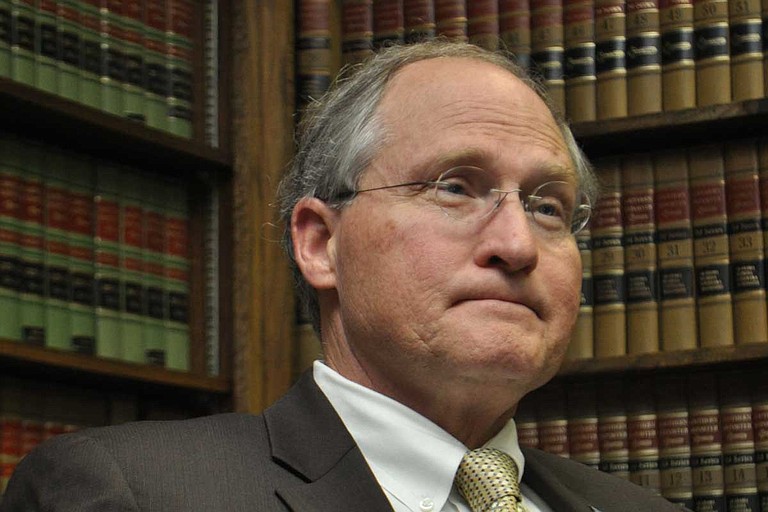 JACKSON, Miss. (AP) — After 21 years on the Mississippi Supreme Court and 10 years as chief justice, Bill Waller Jr. says it's time for someone else to take the helm.

"I think it's just a good time to have some fresh blood and for the court to reorganize under a new chief and frankly to give other folks the opportunity to be chief justice," said Waller, who will resign Jan. 31.

In an interview with The Associated Press, Waller counted as successes a pay raise for judges, an expansion of drug courts, and an expanding electronic record system. The court also decreed criminal court rules that have helped defendants see judges more quickly, and get access to bail and public defenders.

Waller's court has at times questioned problems with forensic evidence, but passed when asked to rule on the legality of Mississippi's cap on punitive damages. He said his biggest regret is not getting a statewide system of county courts.

Gov. Phil Bryant has announced that he will replace Waller with Court of Appeals Chief Judge Kenny Griffis, while Presiding Justice Michael Randolph will become the next leader of the nine-member Supreme Court, based on seniority. The outgoing chief justice, son of the late Gov. Bill Waller Sr., a Democrat who served from 1972 to 1976, said he still might run for governor himself.

"Actually, I'm probably leaning against it, but I am not excluding it and I am considering it," Waller said.

Waller came on to the court in a different time, before the new judicial building was started, when most record-keeping was on paper and when a hot political battle was waging over limiting damages on civil lawsuits. Another change has been improvements in how inmates are represented in appeals, with the creation of the Office of Capital Post-Conviction Counsel and then the Office of Indigent Appeals.

"At that time there wasn't even the right for someone on death row to have an attorney to file an appeal," he said.

Drug courts, an alternative to prison for some drug offenders, were expanded statewide by 2012. Judges are now experimenting with other kinds of problem-solving courts, such as mental health and veterans' courts. Waller supports those expansions, although he says he doesn't want them funded at the expense of traditional courts.

"There are a lot of people with mental issues who would be helped with a problem-solving court instead of a traditional court and we need to be open to that," he said.

Mississippi's electronic court record system was developed by the court system in-house, adapting a program used by the federal courts. Today it's reached chancery courts in 58 counties and circuit courts in 23 counties. Some counties have so far spurned voluntary adoption, preferring programs provided by other vendors, but Waller said he's confident counties will eventually adopt the state program.

Waller also persuaded the Legislature in 2012 to give a big boost to judges' salaries, paying for it with an increase in filing fees. Waller said the increase was "badly needed," saying, "By any study we were the lowest paid in the nation."

The outgoing chief justice hasn't succeeded at everything. He pushed for county courts to be expanded statewide, to provide full-time judges over youth court proceedings, with smaller counties sharing judges. Waller said he believes full-time judges are better, but without funding, progress has been slow.

"I think it goes without question that there's a better outcome, a better result, and I think fewer noncustodial foster care placements," Waller said.

On some issues, Waller and other justices have punted. Asked by a federal court to opine on the legality of Mississippi's cap limiting noneconomic damages in lawsuits to $1 million, the state Supreme Court declined to answer in 2012. The federal court then upheld the caps.

"If the question is ever here, the justices will answer it," he said. "But I can't comment on anything that may come before the court, and it probably will at some point."

Waller has also faced a number of decisions on criminal convictions based on the testimony about autopsies from pathologist Steven Hayne and about bite marks from dentist Michael West. In some cases, the justices have overturned verdicts. Waller specifically mentioned the decision he wrote for the court in the 2004 case of Tyler Edmonds, who had been convicted of helping his half-sister shoot her husband when Edmonds was 13.

Hayne testified that Edmonds and the sister both held the gun, testimony Waller tossed as beyond Hayne's expertise. Some have questioned why the state has never ordered an overall review of cases where Hayne and West testified. Waller said that admitting bite mark evidence "was perhaps improvident and improper" but said a systematic review wasn't the court's role.

"We have to address them one at a time and we've done that," he said.