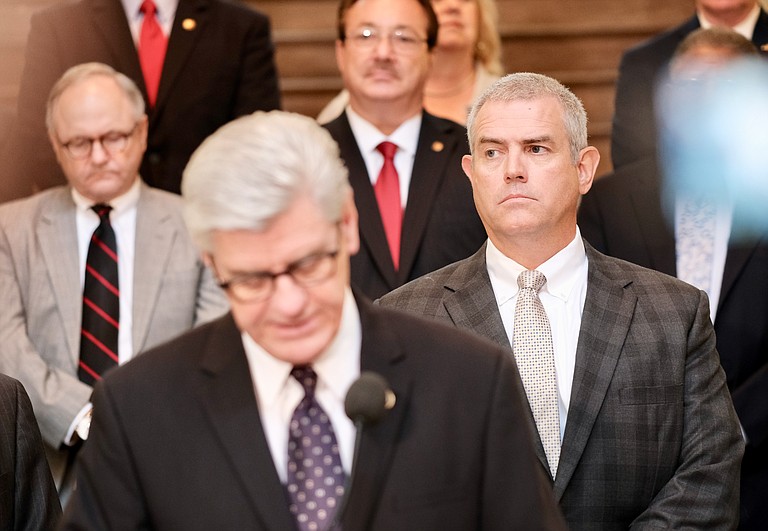 Mississippi House Speaker Philip Gunn, R-Clinton, right, attends a press conference in Jackson on Aug. 23, 2018, as Gov. Phil Bryant speaks in support of a bill to create a state lottery. Gunn chose not to block a vote on the lottery, despite personal opposition to the creation of one. Photo by Ashton Pittman

Both versions of the bill create a state lottery program that a private corporation would oversee with a governor-appointed board. The House version makes the corporation and board subject to public oversight; some lawmakers criticized the Senate version for shielding them from public-records laws. Republican Gov. Phil Bryant, a proponent of the legislation, endorsed the pro-transparency amendment before the House vote.

The House version would ban using video terminals, computers and other mobile devices for the sale of lottery tickets; require that lottery tickets include the toll-free phone number of a state or national organization that provides help to those who struggle with gambling addiction; and ban lottery prizes going to members of the board, employees of the state lottery corporation, or immediate family members who reside in their households.

The 17th Time Is a Charm

The House renamed the bill the “Alyce G. Clarke Mississippi Lottery Law” for the Jackson Democratic House member who for the last 16 legislative sessions has introduced unsuccessful lottery bills. Clarke introduced a competing lottery bill on Friday to direct lottery revenue to fund a scholarship instead of infrastructure, but ultimately voted for the one bearing her name.

The bill returns to the Senate when the Legislature resumes Monday morning. The Senate can accept the changes or engage the House in further talks.

In the last legislative session, which ended in May, lawmakers could not agree on how to fund the state’s vast infrastructure needs as crumbling bridges closed around the state. In recent sessions, Bryant signed a series of tax cuts including a historic 2016 law that cut $260 million in annual corporate taxes and $145 million in annual income taxes. The tax cuts depleted the state’s coffers.

The governor called the special session due to the crisis state leaders allowed to continue after the spring session ended. He said the lottery would generate around $40 million in its first year and $80 million in later years. For the first 10 years, all revenue would pay to repair state’s roads and bridges.

The Mississippi Senate on Friday also passed the Mississippi Infrastructure Modernization Act, which directs revenue from sports betting and the Internet sales tax to funding for roads and bridges.

House Minority Leader Rep. David Baria, D-Bay St. Louis, said it would not be enough in a press conference at the beginning of the special session Thursday.

“All of those things together would be about $200 million,” said Baria, who is the Democratic nominee challenging Republican U.S. Sen. Roger Wicker in November. “We have a 400 million-problem.”

Baria introduced a separate bill Friday to freeze the 2016 tax cuts, which he said should be the first step in the search for new revenue streams. Baria still voted for the House version of the lottery bill.

Mississippi House Speaker Philip Gunn, R-Clinton, chose not to block the vote on the lottery bill, despite personal opposition to the creation of a lottery.

CORRECTION: The original version of this story had the part of the state David Baria represents as Pascagoula. It's actually Bay St. Louis. The Jackson Free Press apologizes for this error.