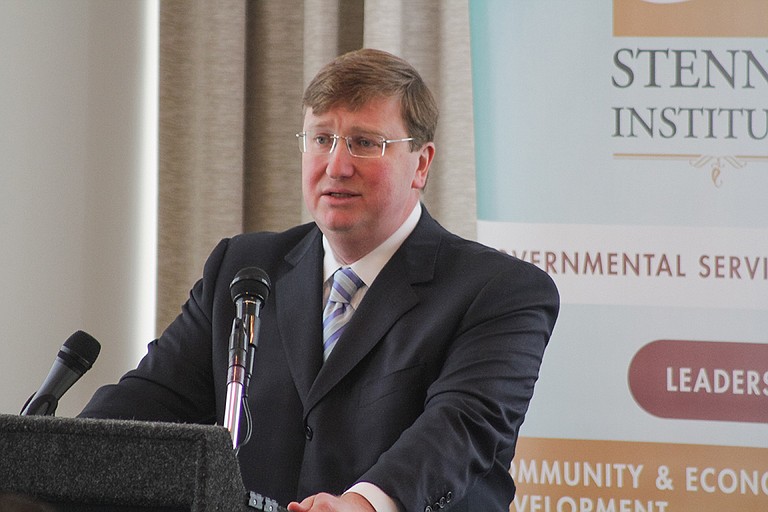 A special session to seek more money for Mississippi's roads and bridges could be drawing near. But nothing is likely to happen without Lt. Gov. Tate Reeves' agreement, and many observers aren't sure what he wants. Photo by Stephen Wilson.

JACKSON, Miss. (AP) — A special session to seek more money for Mississippi's roads and bridges could be drawing near. But nothing is likely to happen without Lt. Gov. Tate Reeves' agreement, and many observers aren't sure what he wants.

Gov. Phil Bryant has been facilitating talks among himself and fellow Republicans Reeves and House Speaker Philip Gunn, seeking an agreement.

"Any special session will include an infrastructure package," Bryant spokesman Clay Chandler said Friday. "Nothing is certain beyond that."

Rep. Trey Lamar, a Senatobia Republican who has been involved in some talks on the House side, said a late-August date is possible for such a session, although speculated start dates have been pushed back over the course of the summer.

"The lieutenant governor has gotten on board a little bit," Lamar said. Reeves' own office didn't respond to questions asked Thursday.

The House position is pretty clear, built around a cornerstone of diverting part of increased taxes on internet sales to counties and cities so they can step up local road maintenance. House members close to Gunn have also said he's willing to allow a lottery to pass, even though Gunn personally opposes state-sponsored gambling. Some House members still want to swap increased fuel taxes for income tax cuts, but that proposal is getting less discussion in recent months, in part because Bryant and Reeves are both flatly opposed to increasing fuel taxes for any reason.

During the legislative session earlier this year, Reeves proposed diverting cash left over at the end of the budget year into transportation rather than the rainy day fund. But his plan would have put little or no new money under control of the Mississippi Department of Transportation, giving the governor control of $800 million or more.

That plan got an icy reception from the road-building agency and its three-member elected governing body. Since then, the deep freeze has only gotten colder. Central District Transportation Commissioner Dick Hall tried to tamp down questions about whether Reeves tried to push the agency to build a $2 million road connecting the front gate of Reeves' subdivision to a nearby Flowood shopping center. But Hall also turned around and blamed Reeves for inaction on road funding thus far. During an Aug. 1 speech at the Neshoba County Fair, Hall called Reeves' funding proposal "a political attempt to trick you into thinking that $600 million may fall out of the sky."

Lamar said achievements of any special session could be limited. He said the diversion of tax money to local governments is most likely to happen. But while lawmakers might inject a dose of borrowed money into the state department, Lamar said it might not get a new dependable revenue stream. Lamar said his read is that a lottery is more uncertain, as is a settlement over how the state should spend $700 million in economic damage payments from BP PLC after the 2010 Deepwater Horizon oil spill.

Cities and counties continue to appeal for help, after federal inspectors concluded local governments had been ignoring problems and forced the closure of a number of timber-supported bridges. As of last week, the Office of State Aid Road Construction counted 452 closed bridges statewide, plus another 1,748 with weight restrictions because of structural concerns.

The Mississippi Association of Supervisors is asking all 82 county boards to adopt a resolution seeking more money from lawmakers. Counties have begun adopting the document, although the association's Steve Gray didn't know how many had acted as of Friday.

"All the players know it's an issue and they want something done that's positive for the state of Mississippi," Lamar said.