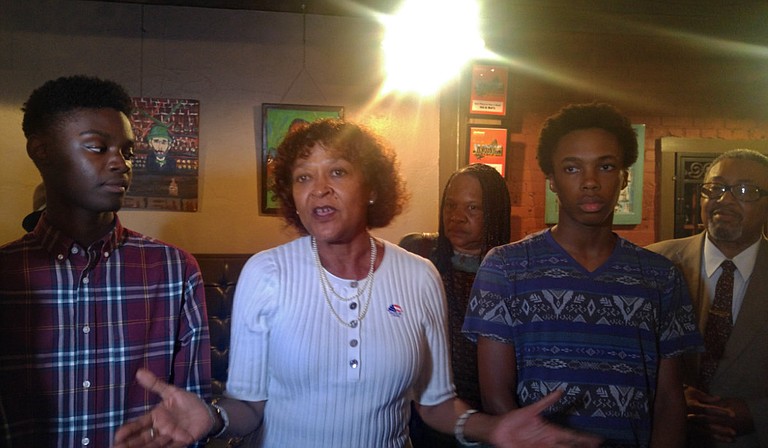 Jackson Public Schools Board President Jeanne Middleton Hairston addressed the media following the passage of the bond referendum on Aug. 7. On her left is Murrah High School sophomore Khai Thompson, and Lanier High School senior Joseph Jiles is on her right. Marie Weidmayer

JACKSON — The crowd of Jackson Public Schools Board members, students and parents was joyous when they received news that the bond referendum passed on Tuesday night.

JPS Board President Jeanne Middleton Hairston thanked all the community members and organizations who came together to support the $65 million bond referendum. "We just thank you so much for this wonderful support," Hairston said at a gathering of bond supporters at Hal & Mal's restaurant.

Nearly 13,300 people voted in the election, and 86 percent voted "yes." The totals do not include absentee ballots, which will be counted later.

The money will go to repair and renovate all 56 buildings in the district. The construction begins as soon as possible and will take about three years, the Jackson Free Press previously reported. An oversight committee of community members will also monitor the distribution of funds, and it will be created soon, Hairston said.

One of the first projects will be updating the facilities to be in compliance with the Americans with Disabilities Act, Executive Director of Facilities and Operations Don McCrackin said.

Murrah High School sophomore Khai Thompson said he was thankful the bond passed because he will see improvements to his school before he graduates.

"It means hope, it's a lot of positivity and, especially since the bond passed, it really means that things are going to start changing," he told the Jackson Free Press. "This is really great, this is a really great night."