City Manager, Not the Mayor, Would Run Jackson Under Proposal 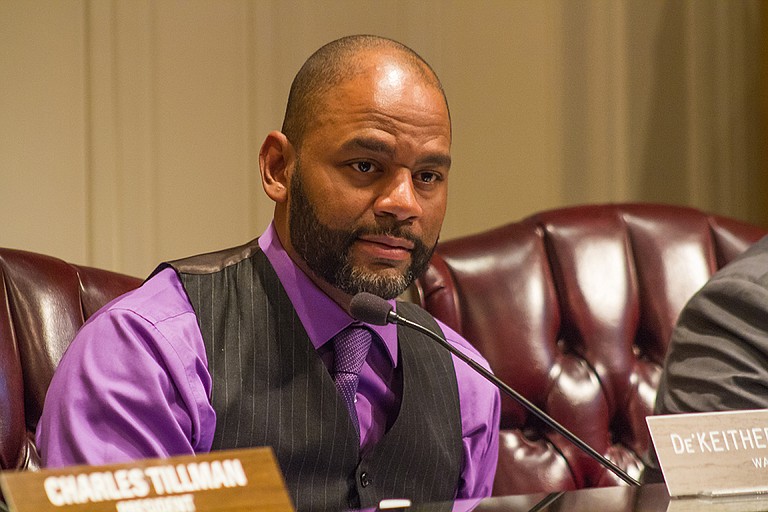 Ward 4 Councilman De'Keither Stamps wants a city manager, not the mayor, to run local government. The Jackson City Council sent his proposal to Government Operations Committee to research it. Photo by Stephen Wilson.

JACKSON — A city manager, rather than the mayor, would run Jackson under a new proposal presented this week. Ward 4 Councilman De'Keither Stamps proposed changing the form of local government in Jackson at the council's July 31 meeting.

Right now, Jackson operates with a mayor-council form of government, where residents elect the mayor, who oversees an administration running the City. Stamps' proposal would change the government to council-manager meaning that a city manager would run the day-to-day operations at City Hall. The council would select that manager and could replace him or her with a majority vote at any time.

Jackson needs the change, Stamps said. "One of the issues I have with this form of government is—just answer a simple question: Has it worked? Has it worked for us?" he said at the July 30 council work session. "This is no knock against Mayor Lumumba or his administration."

By changing to a council-manager government, it takes the politics out of city government because the city manager is a hired professional, not an elected official, Stamps said.

Mayor Chokwe A. Lumumba said at the July 31 council work session that changing the form of government would take away power from Jackson residents.

"I say this as humbly as possible and with great appreciation for the role that has been entrusted in me. I think that the community has spoken loudly and clearly about who they want to run their city for them," Lumumba said at the July 30 meeting. "In fact, to the tune of 93 percent. To strip that from the people—I know you say it's not personal—but I take what I do very personally for the city because it means that much to me."

Stamps made the same proposal in October 2016, but the council voted against it 4-1, a previous article from the Jackson Free Press says.

The city council sent the proposal to the Government Operations Committee, of which Stamps is the chairman. If the council decides to move forward with it, it would take about three to five years to implement the change. The City would hold a referendum, and at least 51 percent of the voters would need to support the change.

The mayor added that he is against the change now and for any future administrations.

"I'll just say that a wise man once said nothing at all," Lumumba said.