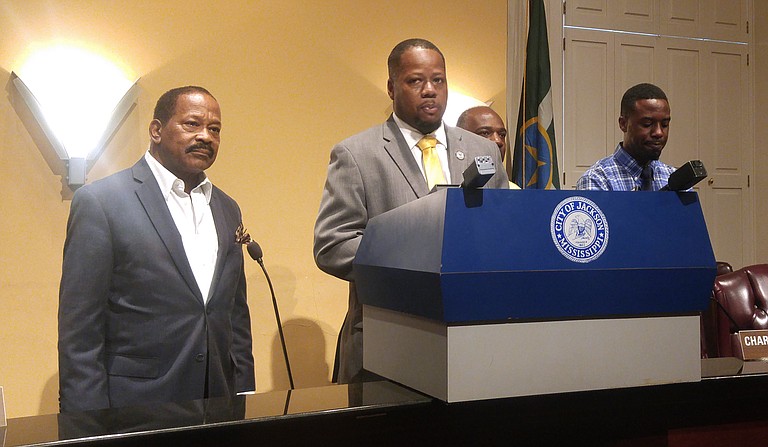 Ward 6 Councilman Aaron Banks (center) introduced a new ordinance to create a safer radius around the schools in the City of Jackson. The City Council sent the ordinance to the Planning Board for review at its meeting on July 31. Marie Weidmayer

Ward 6 Councilman Aaron Banks wants to create a safer 1-mile radius around schools in the City of Jackson by making it a crime to own unkempt abandoned properties.

People who own blighted properties, overgrown yards and more would face more penalties under Banks' proposed ordinance. Currently, property owners can face a fine up to $1,000. With the new ordinance, police could also charge them with a misdemeanor, which means up to 90 days in jail.

These are the highest penalties allowed under state law, but Banks said he also wants to talk to the State of Mississippi to increase penalties. 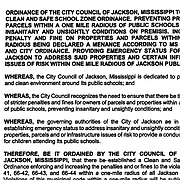 Banks introduced the new ordinance to the City Council at its July 31 meeting. The council sent it to the planning board to work out details before voting. Council President Melvin Preister Jr. asked to make sure that the Department of Public Works, the Department of Planning and Development, and the police department are at the planning meeting.

Banks said he wants to get the ordinance passed quickly since the school year starts Aug. 8.

"What if you have students that are walking to school, and they have to walk right in front of a blighted or dilapidated property?" Banks said at the press conference. "God forbid, what if someone pulls one of those young students in and does something that's unseemly? I think it is up to our government, our municipality, to make sure that we are providing a clean environment and a safe environment."

"We believe that our students shouldn't have to walk through these type of deplorable conditions when they're going to school to learn," Banks said. "We want to prevent these things from happening."

As the ordinance is proposed, the mayor's office would enforce it, with the departments that report to the office, including the Community Improvement department. The Department of Public Works will also be able to enforce it because of the ordinance's provision for fixing infrastructure, including potholes and standing water, Banks said.

During public comment, Jackson resident and property owner Joe Lewis spoke against the proposed ordinance. He said the City already has similar ordinances, but they are not enforced.

"If you were to enforce what is already on the books, you would have no problems," he said. "If you take a 1-mile radius of every school in the City of Jackson, you're pretty much going to cover the entire City of Jackson."

The next planning board meeting is at 1:30 p.m. on Wednesday, Aug. 22, at the Andrew Jackson Conference Room in the Warren A. Hood Building (200 S President St.).