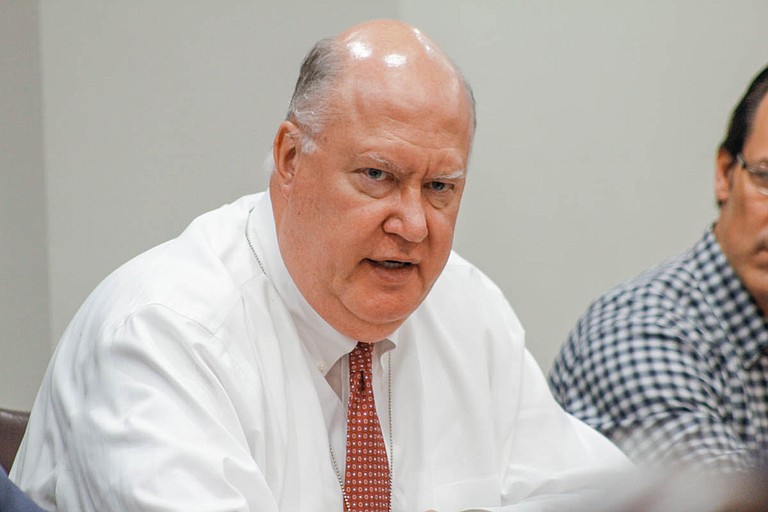 Jackson Director of Public Works Bob Miller is giving Siemens Inc. six months to get the City's billing system fully functioning because nearly one-third of Jacksonians are receiving water without paying for it. He is pictured here at a tax-commission meeting on April 11, 2018. Photo by Stephen Wilson.

The Jackson City Council voted just before midnight last night to accept Public Works Director Bob Miller's proposal to overhaul the Siemens Inc. contract and recoup millions in missing water revenue from local customers. Miller told the council during a Monday work session that with its approval, he would get to work with this the following Monday, with water bills ready to go out to customers in a matter of two weeks, including to those who have not gotten bills in as much as a year or have received grossly incorrect bills.

Since Miller has been in the administration, the City has failed to bring in between $10 million and $20 million in revenue from water bills. There are at least 20,000 customers, one-third of the citywide accounts, getting water pumped through their homes without paying for it. Customers are "stranded in the system" meaning they either don't get billed at all or the bill is arbitrary and not based off an actual meter reading. The same thing happened in 2016.

Considering some customers have not gotten bills in a year, it could take as long as 18 months for the City to recoup all the revenue customers owe.

Miller found $1,122,000 already in the contract to pay Siemens contractors to fix the billing system by September. Miller calls this a "scope swap" because this does not change the net value of the contract at all; it just alters expectations.

Under Miller's plan, Siemens' contractors will provide the "necessary services" to resolve issues with the water-billing system through Sept. 30, and after that, billing will be handled in-house. Miller said Monday that he does not currently have the staff to handle the system, but he said he will by September.

During public comments at the city council meeting last night, a woman illustrated just how dire the water-billing situation has gotten. Pamela Williamson recently received a $9,000 water bill, and the City adjusted it to around $4,000. Customers like Williamson will be offered a payment plan to deal with costs with the same amount of time to pay their bills as the amount of time since their last bill.

Williamson said in 2016 she got a bill every other month when she had the old water meter, and paid roughly $150 to $180 monthly for water. Then in 2017 she didn't get a bill at all and also had a water leak. 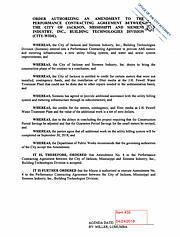 "I'm stuck here because I don't have anyone to help me with it, and I don't even know who to talk to—," she began saying before Mayor Chokwe Antar Lumumba interrupted her.

The mayor thanked Williamson for sharing her story, and assured her that if the council accepted Miller's proposal on the agenda last night, issues like hers would happen less often.

"We know there is a problem with the billing. We know that you have not taken that many showers. ... Today's decision will have a huge impact on correcting that issue," Lumumba said.

Miller said Monday that leak adjustments would be taken care of before bills go out to customers this time around. In the meantime, he wants to make sure that no more "stupid bills" go out. He wants to launch a communications plan to explain to customers how water bills will work in the future.

Nearly four hours after Williamson addressed the council, the Siemens item came up for a vote. Most of the members had met on Monday night for a two-hour work session largely dedicated to hashing out the details of the Siemens.

Siemens 'Off the Hook'?

Ward 4 Councilman De'Keither Stamps, who was at the work session, asked a couple clarifying questions, one of which revealed that the City administration had already accepted substantial completion of work Siemens had done as per their contract in the last year or so without informing the council.

The mayor interjected as did the city attorney so councilmembers could discuss the sensitive contractual issues behind closed doors. But Stamps continued, saying he didn't know that the City had let Siemens "off the hook" and wanted to understand what else he may not know before making a decision to shift anything in the contract. He wondered if with deeper research the administration could have found more money in the contract beyond the $1.1 million Miller identified.

"I understand the necessity to vote for this and to get water bills right ..., but I don't want to look back at this as a moment when I didn't take the proper action because I didn't understand to the degree that I should've understood," Stamps said to the council. "I don't even know what question to ask at this point because I didn't even know we took ownership of the situation...."

Ward 2 Councilman Melvin Priester Jr. effectively brought the conversation to a pause so that the council could continue hashing things out without the public looking on.

"[I]'d rather not say something off the cuff that becomes the first thing that gets played back in a deposition two years from now for the sake of trying to look cool," Priester said. "So if this is the tone and temperature we're moving to after the two-hour work session we had yesterday about this, then I think it would probably be appropriate to go into closed session at this point."

The council voted in January to sue Siemens by a slim margin with a vote of 3-2. Ward 7 Councilwoman Virgi Lindsay and Priester Jr. were not in the room, and Council President Charles Tillman of Ward 5 and Ward 1 Councilman Ashby Foote opposed it. The lawsuit went nowhere, especially with the mayor declining to give his administration's position at the time, but sent a message that council members were fed up.

After Priester's suggestion last night, the council finished the other items on the agenda and went into a closed session in the 11 o'clock hour. Just before midnight, they reconvened to vote, and the Siemens item passed 5-1, with Stamps saying nay. Ward 3 Councilman Kenneth Stokes had left before the vote.

The City's uneasy and uneven history on the Siemens contract weighed heavily on the decisions this week.

Tillman said Monday during the work session that he did not like Miller's proposal because it made the City look bad. "It reflects back on all of us, especially me because I've been here the longest, and I know the history," he said.

The City's water-meter issues stem back to the 2012 contract with Siemens that gave the German conglomerate authorization to audit the city's water system and evaluate the need for a new electronic water-meter system.

On May 1, 2012, Mayor Harvey Johnson Jr.'s administration recommended that the city council vote to allow Siemens audit the city's water system and evaluate the need for a new electronic water-meter system. By a 5-2 vote, Quentin Whitwell of Ward 1, Chokwe Lumumba Sr. of Ward 2, Frank Bluntson of Ward 4, Tony Yarber of Ward 6 and Margaret Barrett-Simon of Ward 7 voted to approve the audit. The dissenting votes came from Ward 3's LaRita Cooper-Stokes and Charles Tillman of Ward 5.

By July 22, 2013, Siemens had completed the audit and appeared again before the council for final approval of a $91-million contract to revamp the water system—especially its broken billing that had led to millions of dollars of losses in revenue over many years. That contract was an extremely high-priced performance contract—the largely the City had ever signed—and the kind of agreement that has caused controversies in other cities.

Then-Mayor Harvey Johnson Jr. signed the Siemens agreement after the Jackson City Council approved it n October 2012 and after the Mississippi Development Authority green-lighted the deal. Tillman is the only remaining member of the city council from 2012 the Siemens contract. Mayor Chokwe Lumumba Sr. was on the council then and was among members who both approved the contract and who criticized its slow implementation, as well as expressing concerns about enough minority subcontractors being included.

Johnson told the Jackson Free Press in 2015 that the contract would have gone better had the City followed his original plan and appointed a contract manager to oversee it. The first Mayor Lumumba had said that would have cost too much and that the original contract, approved by the council in 2012, did not contain language requiring a monitor.

Miller said Monday that he knew his proposal for repairing the billing problem was not ideal, but necessary nevertheless.

The troubles associated with Siemens also revealed transparency and performance issues within the City's contacting and subcontracting history.

Miller hopes the City gets it right this time.

"This is existential ... but this is why they brought me here is because i know how to do this," Miller said after the Monday work session. "This is what i know how to do. And this is frankly why I came here—I enjoy serving citizens."

CORRECTION: Due to an editing error, the original version of this story said that former Mayor Chokwe Lumumba Sr. had signed the Siemens contract, which was created under previous Mayor Harvey Johnson Jr. In fact, Johnson had signed the contract after the Jackson City Council approved it in October 2016, including then-Ward 2 Councilman Lumumba Sr. The story is corrected, with additional information and links about that history.

Email city reporter Ko Bragg at [email protected] and follow her on Twitter at @keaux_. Read more about the Siemens saga at jfp.ms/siemens.