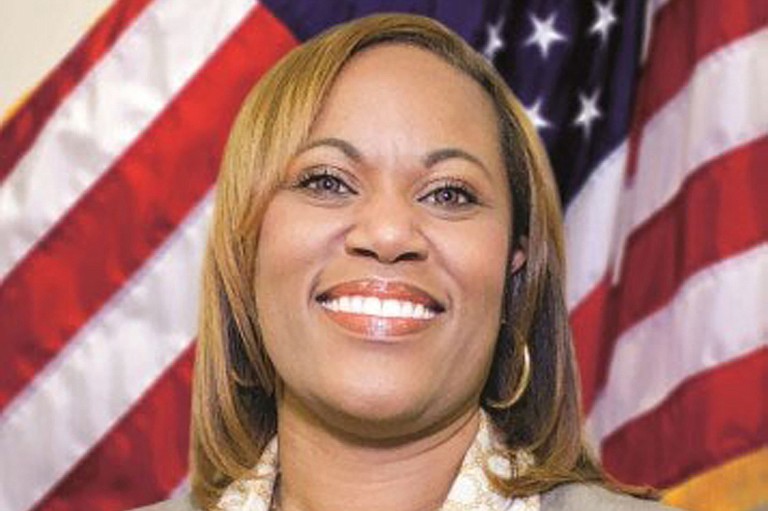 MDOC Commissioner Pelicia Hall defended her decision to pull inmates out of regional facilities due to budget constraints at the Capitol on Monday, where sheriffs had gathered to tell lawmakers they were going to be in funding danger. File Photo/MDOC

JACKSON — Mississippi sheriffs packed into Room 113 at the Capitol Monday to express frustrations after the Mississippi Department of Corrections announced a reduction in inmates housed at the 15 regional facilities in the state even as taxpayer money is going to fund private, corporate-operated prisons.

MDOC Commissioner Pelicia Hall said she had no choice fiscally but to pull inmates out of regional facilities. MDOC had budget problems at the start of 2018 and asked the Legislature to help fund its budget deficit. The Legislature came up with $7 million to fund MDOC's request for the state's private-prison bond obligations and medical costs for inmates—but stopped short of providing the $3.6 million deficit the department requested for the regional correctional facilities.

"The fact is we have funding issues in corrections. That's not a revelation to anybody," he said. "There have been some deficit-spending issues, and all of them haven't been addressed."

MDOC currently houses medium- and low-custody inmates at the 15 regional facilities, run by 22 counties and local sheriff departments in the state. The counties own these regional facilities, and MDOC pays the counties at a range from $20 to $29.74 per inmate per day, depending on the county's bond indebtedness. Counties and sheriffs use these funds to help pay off bonds or balance their budgets.

If the department removes inmates from regional jails, local counties and sheriffs' departments will receive less funding than they do currently from MDOC to house state inmates.

William Allen, an attorney who represents the Mississippi Sheriffs' Association, pointed out that the State initially asked the counties to build the regional facilities back in the late 1990s and early 2000s to house the ballooning state prison population. The State also contracted with private-prison contractors to operate facilities they built during this time. Fast forward two decades, however, and Mississippi passed substantial criminal-justice reform measures in 2014 that led to a drop in inmate population statewide, lessening the need for cells. MDOC closed the Walnut Grove Correctional Facility in 2016, citing budget reasons and less need for space.

Allen and sheriffs questioned the State maintaining contracts with private prison corporations when they are cutting funding to regional and local jailers at the same time. Some sheriffs testified about being unable to repair their buildings or keep prison guards employed without funding for adequate salaries.

"Unfortunately, the regional jails weren't funded while the private prisons were. The private facilities have been funded, and you may have seen one of these facilities in the news lately," Allen said referring to the class-action lawsuit against the East Mississippi Correctional Facility in Meridian brought by prisoners for lack of treatment and bad conditions.

Commissioner Hall is in a tough spot, however. The State contracts with the Management and Training Corporation to run the three operational private prisons; those contracts were signed before her tenure began. Those agreements require certain inmate population levels and payment guarantees.

"There's a prison-population guarantee that the State is required to have with those facilities," Hall told lawmakers on Monday. "... And to remove those potential inmates, the State would have to basically renegotiate or re-do those particular contracts whereby we're not obligated to fill those beds."

Additionally, Hall said that the private prisons house medium- to high-security level inmates, as well as inmates with special mental-health needs like at EMCF, while the regional facilities house state inmates considered to be low- or medium-custody. With the Legislature's criminal-justice reforms, Hall said the dynamics of the prison system will change over time.

"Ultimately, the low-level offenders are not going to be the ones spending those long sentences in the county jails, and that's just the nature of the beast that comes with criminal-justice reform," she said. "I think in this state we built too many prisons, and we were over-incarcerating at some point. Well, the trend has turned."

MDOC pays about $41.74 per inmate per day in a private prison, Hall said. At the Capitol on Monday, she said that the contract for Wilkinson County Correctional Facility is up for renewal in June this year, and she is having her staff prepare a request-for-proposal for contractors to bid on. She said she is also considering bringing the operations there back in-house.

The State still owes more than $217 million in bond indebtedness on private prisons, and taxpayers will pay for those bonds, including for the closed Walnut Grove, until 2027, MDOC numbers show.

These bond costs are in addition to the State's contractual obligations to MTC to operate the facilities and to other contractors such as Centene Corporation to provide medical care in the state's prison system.

County taxpayers in the 22 counties that issued bonds to open regional prisons will have to foot the bill for those facilities, however, which is why the room was tense on Monday. There are about 3,000 inmates in the state's three private prisons, while regional facilities house more than 4,000 inmates.

"Ultimately, it comes down to funding, and just like you all have needs and issues in your regional facilities, we have them in the Department of Corrections, too," Hall said.