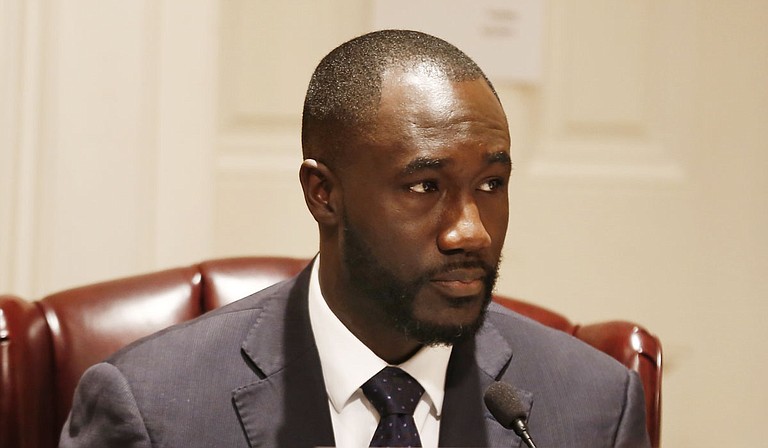 Jackson and Atlanta have been interconnected since the Mayor Tony Yarber era. Mitzi Bickers is one of those common threads, having worked on both Kasim Reed's mayoral campaign in 2009 and Yarber's in 2014. She has been accused of steering contracts in both cities.

Bickers was indicted in an Atlanta federal court for bribery charges on March 27. Shackled in handcuffs and leg irons for her initial appearance on April 5, Bickers pled not guilty to the 11-count, 23-page indictment, the Atlanta Journalism Constitution reports.

The criminal indictment accuses her of getting approximately $2 million in proceeds from helping two Atlanta businessmen, Elvin R.Mitchell Jr. and Charles P. Richards, secure $17 million worth of contracts with the City of Atlanta in a five-year period.

Gucci, Jetskis and a Denali

After participating in Reed's campaign, Bickers got a job as the director of human services for the City of Atlanta in 2010. Mitchell and Richards, both owners of several construction companies, "agreed to pay bribes to Bickers ... to secure City of Atlanta contracts for their businesses," the indictment charges. All court documents quoted in this article represent one side of a legal proceeding.

The indictment records large sums of money moving from Mitchell's or Richards' accounts sometimes days later into Bickers' business accounts. In 2011 alone, Bickers made $650,000 in income, but only disclosed that she had made nearly $58,000 to the Internal Revenue Service, and received a tax refund of nearly $4,000, the indictment shows. 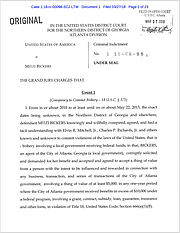 That same year, the indictment says, Bickers bought a lakefront house outside Atlanta for approximately $775,000, wiring nearly $300,000 from a personal account to a closing attorney within the 48 hours before she closed on her home in June 2011.

In 2013, Bickers had to resubmit her financial disclosure statement because she had not disclosed that she had been employed with Pirouette Companies, a dance-company turned political-consulting endeavor. She resigned from her role in Reed's administration that same year.

But that is not where the alleged bribes ended. In January 2014, Atlanta experienced a snow and ice storm that shut the City down for days, leaving people stranded on highways without food and water. The City of Atlanta paid Mitchell's company $3.2 million between late February and early March 2014 to provide services following the snowstorm.

That same month, Bickers' companies received direct checks from Mitchell, the indictment shows. Later that year, Bickers bought four jet skis, an all-terrain vehicle, and a trailer through her political consulting company, Bickers Group. Between March 2014 and June 2014, she incurred charges from Gucci, Delta Airlines, the Ritz-Carlton Aruba, Carnival Cruise Line and Disney Resorts. In May 2014, she wrote a check for a $46,000 for a 2014 GMC Acadia Denal, the indictment shows. 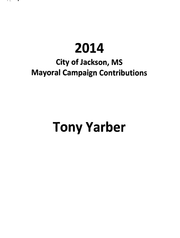 Bickers also gave money to Yarber's campaign in 2014 through a thousand-dollar donation from Pirouette companies and a personal donation of $4,000 that March. Mitchell also donated to Yarber in the sum of $10,000, April 2014 finance reports show.

Since 2015, Mitchell has been working with an FBI investigation into corruption at City Hall, and he pleaded guilty in January 2017 to conspiratorial bribery and money laundering. Richards also pleaded guilty, and the two men were sentenced to prison in October 2017, the Associated Press reports.

History of the 'Kingmaker'

Jacksonians should be no stranger to Bickers.

Yarber entered City Hall in April 2014 after winning a special election following the sudden death of the late Chokwe Lumumba. In a now-settled sexual-harassment lawsuit from 2016, Yarber's executive assistant, Kimberly Bracey, alleged wild interactions between Yarber and Bickers—both pastors. After one fundraiser in the spring of 2014, Bickers "paid for everything" at a strip club, Bracey alleged in the complaint, saying she was required to watch the door where Yarber and one of the strippers went into to be alone, court documents say.

Bracey described another alleged Yarber fundraiser in Atlanta where strippers wearing only body paint greeted her and others at a friend of Bickers' home, to which they arrived by boat.

"She's a kingmaker, that's what she is, and she is the kind of person that understands her roles in different spaces," Yarber told the Jackson Free Press in 2017. "So in Jackson she thought that her role would be able to do contracts, make some money, but she quickly understood that her role was to help to sustain and make sure that I was successful. And to do that was to get me in front of the right people."

In another ongoing lawsuit, Stephanie Coleman, the equal opportunity business manager under Yarber, named Bickers as someone trying to steer contracts. At an evening meeting at Parlor Market restaurant downtown in May 2015, Coleman said Bickers told her that Yarber "wanted to express his gratitude for her service by allowing her to participate in a few upcoming major contracts," Coleman's lawsuit says.

Coleman also alleges that then-Public Works Director Kishia Powell, now the commissioner of the City of Atlanta Department of Watershed Management, may have altered scores and made disparaging statements to steer contracts to the Denali-Garrett team for a $15-million wastewater-treatment plant contract, which Powell then denied to the Jackson Free Press.

On April 9, Atlanta Mayor Keisha Lance Bottoms asked for resignations from her cabinet, which includes Powell. 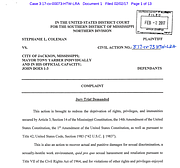 Synagro-Fisher, another team in the running, had a proposal of more than $1 million less than Denali-Garrett. Yarber's campaign finance chairman, Socrates Garrett, sought the contract and Bickers Group was initially listed as almost half the minority participation, which later changed after Coleman objected to Bickers' inclusion, her lawsuit reads.

The Jackson City Council ultimately struck down the new Garrett contract without Bickers to start the bidding process over again. Coleman's lawyer, Wilson Carroll, represented another minority-contractor at the center of a wastewater contract dispute this winter.

Bickers' name also came up again during the 2014 U.S. Senate race between U.S. Sen Thad Cochran and state Sen. Chris McDaniel in which Republican supporters of the incumbent worked to draw black voters to him over the Tea Party candidate. The Jackson Free Press reported then that a super PAC, Mississippi Conservatives, paid Bickers to run a robocall campaign to help Cochran by associating McDaniel with the Ku Klux Klan. Former Gov. Haley Barbour created the PAC in 2014, which his nephew, Henry Barbour, ran in 2014.

Bickers is currently out on $50,000 bond, and McDaniel is again running for the U.S. Senate.