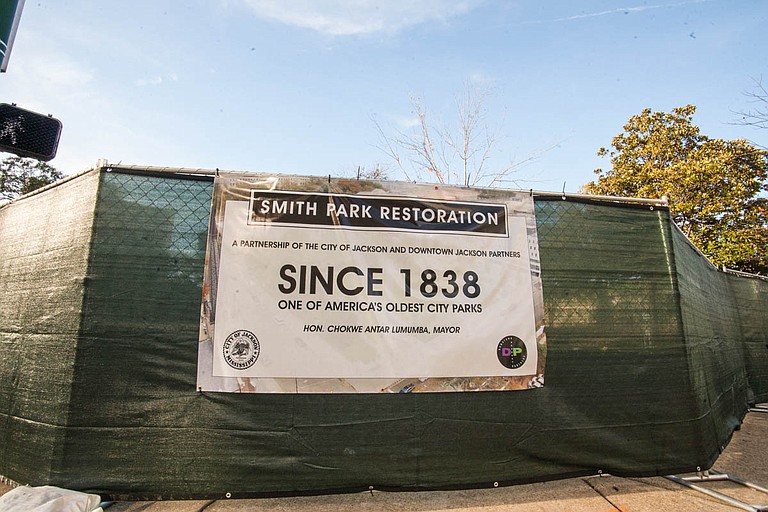 Smith Park in downtown Jackson, which has been closed for renovations since November 2017, will reopen on Friday, April 13. Photo by Stephen Wilson.

Smith Park in downtown Jackson, which has been closed for renovations since November 2017, will reopen on Friday, April 13. A ribbon cutting for the refurbished park will take place in conjunction with Food Truck Friday, which runs from 11 a.m. to 1:30 p.m.

"The creek beds were filled in, and the whole park was resodded as part of the renovations," John Gomez, associate director of Downtown Jackson Partners, told the Jackson Free Press. "They also installed a new stage floor, refurbished 26 park benches and added more green space throughout the park. The park is ready to open to the public now that the new sod is OK to walk on."

Jackson Mayor Chokwe Antar Lumumba, Gov. Phil Bryant, and members of Downtown Jackson Partners and Friends of Smith Park will make remarks at 11:15 a.m. as part of the ceremony. The Chris Gill Band will perform on the new stage during the event.

The Credit Unions of Mississippi will give free admission to the first 2,500 guests at the Jackson Zoo on Saturday, April 14, as part of the fourth annual CU at the Zoo.

This year's event is in celebration of Youth Savings Month, which is part of National Credit Union Youth Month in April. Credit Unions of Mississippi will set up game booths, hold giveaways and offer financial literacy tools to teach children about saving money at an early age. CU at the Zoo will also feature a bounce house, an inflatable obstacle course, face painting, crafts, and a scavenger hunt in which guests visit each credit union booth at the zoo with a chance to win a $300 cash prize.

The American Advertising Federation will host its District 7 Spring Convention at the Westin Jackson (407 S. Congress St.) hotel from Thursday, April 12, to Sunday, April 15. The event will feature networking opportunities and creative competitions for advertising and marketing professionals, as well as students from Mississippi and surrounding states.

Registration for the District 7 National Student Advertising Competition opens on Thursday, April 12, and the AAF will announce the winners on Friday, April 13, at 5 p.m. The organization will also present the Jan Gardner and Mosaic Scholarship during the competition wrap-up event.

The convention will include the Governor's Gala on Sunday, April 15, from 6 p.m. to 10:30 p.m. at the Old Capitol Inn (226 N. State St.). AAF will announce its new district officers and regional directors for 2018 and 2019 at the event, and present awards such as Club of the Year, President of the Year and the Governor's Medal. The gala will also feature music from Memphis Jones and his band.