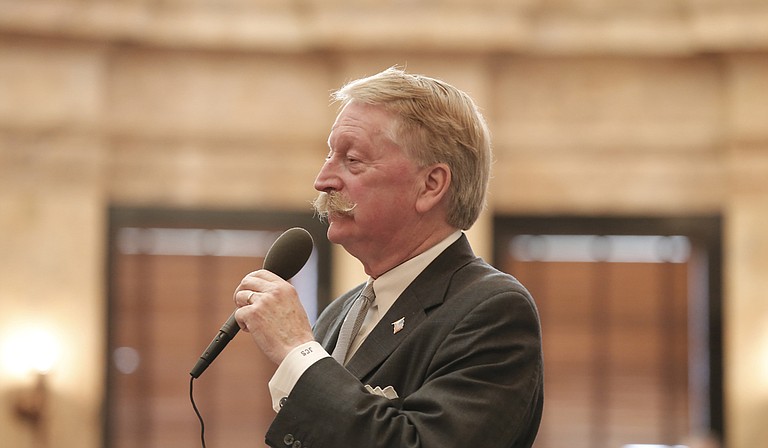 Rep. Jeff Smith, R-Columbus, told the Mississippi House of Representatives that negotiating with the Senate is difficult—but not impossible. Photo by Imani Khayyam.

JACKSON — Late in the 2018 legislative session, Rep. Jeff Smith, R-Columbus, talked about a night that his son broke curfew. His boy had spent his father's money on "whiskey, women and wasted the rest," Smith described. He was answering a question from Democratic Rep. Steve Holland from Plantersville on how hard it had been to confer with the Mississippi Senate and get a bond bill to the floor.

"I beat the Hades out of him, and I called it an attitude adjustment," said Smith, the chairman of the House Ways and Means Committee, about his son. "To deal with the Senate, there needs to be an attitude adjustment. Or you're sort of beating your head against a brick wall. It is rather difficult—but not impossible."

House Speaker Philip Gunn, R-Clinton, stops short of such sentiments, but when he spoke with reporters on Wednesday, March 28, after lawmakers went home, he emphasized that the House had done its job this session.

Not all Republicans think alike, or at least not in the Mississippi Legislature. Differing opinions on everything from transportation funding to allocating BP settlement funds left several measures dead and gone by the end of March—even bills Gunn and Reeves deemed priorities.

Technically, the Senate did fail to pass several measures that Reeves had prioritized and outlined earlier this year. He did not even bring up voucher legislation, blaming the House for not having the votes despite not letting his own members vote on it first.

Reeves thought he had the votes for the EdBuild-based school-funding formula to replace the Mississippi Adequate Education Program that the House passed after a contentious debate. It also failed. Reeves said the bill's failure was a disappointment but chalked it up to the legislative process.

"This was the very first year that there was an actual bill that was brought forward," he told reporters March 28, noting that it is rare for major policy initiatives to pass the first year they are introduced.

Republicans have supposedly been working to divert more funds to roads and bridges since 2016, but so far that's meant a lot of talk and no walk—or drive. As municipalities continue to close bridges and fill potholes, lawmakers worked several hours in March on proposals to divert more revenue to infrastructure, to no avail.

This is not the first time funding for roads and bridges has failed. Several budget bills died after the House tried to force a conversation on funding for roads and bridges exactly a year ago. The governor had to call a special session to pass budget bills for the attorney general's office and the Mississippi Department of Transportation. During the off-season, both Reeves and Gunn voiced support for funding what they both agree is a "core function of government."

But when January 2018 rolled around, the House jumped first, passing a series of bills that outline Gunn's position for how revenue should be diverted to roads and bridges. The House proposed use-tax diversions, which have recently been boosted since Amazon began collecting it, and other online retailers continue to follow suit. The House plan called for 35 percent of use tax diversions with no caps that to go towards roads and bridges, which totaled around $108 million in new funds for roads and bridges.

The House also wanted to divert any revenue above the 2 percent set aside to go into a special fund for roads and bridges, passing a bill in January. The total dollar amount for these two proposals would be about $208 million. The Mississippi Economic Council estimates that $375 million annually is needed to fix the state's infrastructure annually, however, and both the House and Senate proposals relied on uncertain revenue streams, especially with the tax cuts lawmakers passed in 2016.

Every House transportation proposal died in the Senate, and Reeves was mum on road funding until Feb. 19, a few days before the Senate had to pass the measure on deadline. That day, he announced a "billion dollar" road proposal, called the BRIDGE Act. The plan would divert some existing tax revenue, using the sales tax and not the use tax, but also heavily relied on dollars that were transferred from existing Mississippi Department of Transportation funds as well as a matching grant program.

Reeves told reporters that the largest differences in the House and the Senate proposals were settled during budget weekend.

"Ultimately, what really killed the conversation and the ultimate deal, after making all of those concessions on both sides (was) when the BRIDGE Act left the Senate, we had approximately $40 million in individual projects. When it left the House it had nearly $100 million in individual projects," Reeves said, pointing to a highlighted handout showing two extra pages of projects the House added into the road-funding proposal.

Gunn told reporters the House still had problems with how the Senate proposal required municipalities and counties to find new revenue in order to get state-matching grants for roads and bridges under the Senate measure.

"If you're only going to give them a match from the government for new dollars, and they're not going to get any sales tax, really they've only got two options left ... shift dollars over here or raise taxes," Gunn said last week. "... [T]hat's what we saw. We're not going to pass a road plan that's going to ... result in an increase of their taxes."

Reeves told reporters the BP oil settlement discussions seeped over into road-funding debate very close to deadline. He believes that 100 percent of the BP money should go to south Mississippi, he said.

"Before the 6 o'clock deadline on Monday for the transportation bill, we realized the only way they would agree to BP is if we agreed to their list of projects which were substantially similar—though not identical—to the projects that were offered in the BRIDGE Act," Reeves said. "So what that said to me is a lot of these negotiations hinged on these individual projects—not on what the actual policy was surrounding the major pieces of legislation that were before us."

That list of projects seemed to irk Reeves, who called himself the taxpayers' "watchdog." He mentioned that walking trails in Houston, Miss., and near Eastover Drive were added to the list of projects.

"When the conversation is surrounding local bridges falling in, investing more money in walking trails, in my opinion, is not the best use of what we all agree are limited resources," he said last week.

Speaker Gunn said the two chambers were close on a BP settlement funds deal. "I think if we are able to come to an agreement, the governor could call a special session, and we could knock it out in half a day," he said. "So I think we've made some progress."

Many lawmakers point fingers at the lieutenant governor, who is expected to run for governor in 2019, for not getting support for his legislation. Reeves did not apologize for being what he calls "fiscally conservative," however.

"I believe that I was elected ... because of the fact that the taxpayers of this state believe that I will be here to be their watchdog when other people in the building want to spend their money on walking trails and other things—that somebody has got to be willing to stand up and say no," Reeves said.

Reeves said the Legislature has seen a lot of disagreements over the last several years because the House wants to spend "significantly more" than he is willing to spend.

"So I don't know if you want to call it 'heavy-handed.' ... I will call it fiscally conservative, and I do not apologize for standing up for the taxpayers of this state and protecting their interests."

Read more of what happened in the 2018 legislative session at jfp.ms/msleg18. Email state reporter Arielle Dreher at [email protected].