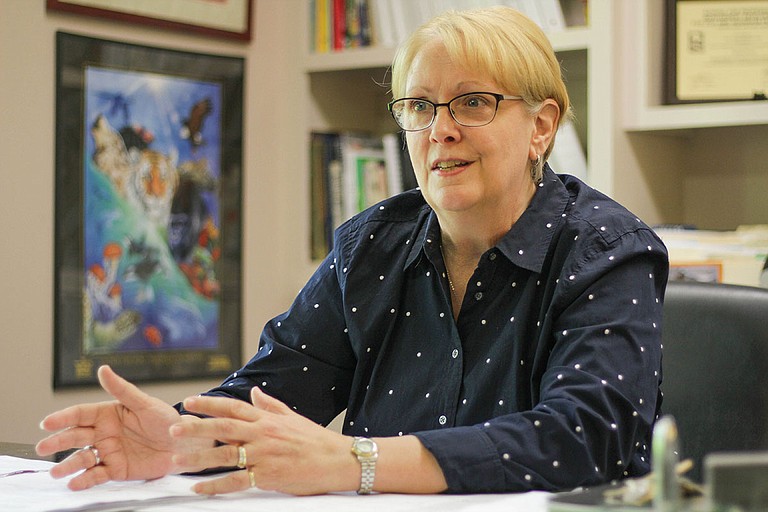 Jackson Zoo Executive Director Beth Poff is excited to rebuild at LeFleur’s Bluff State Park, which is still in Jackson, but hates to leave the old one. Photo by Stephen Wilson.

JACKSON — On an overcast morning in November 2017, the Zoo Area Progressive Partnership hosted a cleanup and brought folks together to paint murals on plywood hung on a chain fence across from the main entrance to the Jackson Zoo.

Heather Ivery, president of ZAPP, which helps improve the main corridor to the Jackson Zoo, kept an eye on her 6-year-old daughter as she painted near a hole in the sidewalk that was slightly covered with a plank of wood. Ivery wants west Jackson to thrive again.

"These little kids need to know that this is a place they can be safe and want to grow up and stay here and come back when they get old," Ivery said then.

Ivery strongly supports the zoo remaining in west Jackson, but on March 27, the Jackson Zoological Society board confirmed it will move to the eastern side of the city to LeFleur's Bluff State Park, closer to Rankin County than its long-time home on West Capitol Street.

The announcement came after years of whispers that donors would no longer support the zoo if it did not relocate east near the Children's Museum and the Mississippi Museum of Natural Science.

ZAPP feels left out of the decision and even hurt that the zoo is moving. "This is a disinvestment in our community," Ivery said this week. "I can't see any major silver lining at this point."

She added that this move implies "west Jackson doesn't matter," as the zoo board has decided to invest elsewhere.

Sitting in her zoo office on April 2, Executive Director Beth Poff said she is excited about getting to build a zoo from the ground up, but also disappointed that west Jackson is still empty and dilapidated with no new businesses around the zoo.

Optimistically speaking, she said, the zoo probably will not relocate for at least four years considering they have to develop the plan, raise funds and then build the new facilities.

"I want it done before I'm too old to walk around the zoo," Poff said.

Poff is thrilled to finally have "one clean direction" for the zoo, saying that people have been constantly asking her about its fate over the years. Her hope of staying in west Jackson faded after a surge of excitement in 2013 when the zoo board hired consultants through Schultz and Williams to assess its future.

Talk of a health corridor and Architect Roy Decker's west Jackson master plan created hope that the zoo might stay put. Poff then created a new site plan for its current location. But, a fundraising feasibility study said otherwise—donors did not want to increase or maintain financial support should the zoo stay in west Jackson.

The Schultz and Williams task force presented its recommendations to the zoo board on March 27, and the board accepted the advice the next day to officially move the zoo, Poff said.

The zoo has been candid about its reason for moving—survival. In a June 2017 memo to then-Mayor Tony Yarber and the Jackson City Council, the zoo board stated plainly that the threat of donors pulling out and waning financial support from the City made the zoo's situation untenable.

"This is a defining time for the zoo, and now is the time for action," the memo concluded.

This week, Poff referred back to a September 2017 meeting with Mayor Chokwe A. Lumumba, where he was "firm" about his preference for the zoo to stay in west Jackson, but also open to listen, Poff said.

In October, the mayor told the Jackson Free Press that the City was working on a Mississippi Home Corporation blight grant, which is now in its early stages, but those efforts did not come to fruition in time to save the zoo.

Now, Poff says she needs to go back to the mayor to work out a "gray area" with the lease renewal coming up in September 2018. Poff wants to stay put and keep the zoo running in the meantime.

Although Beth told the City she needed $1.5 million last year, in the last two fiscal years the most she got from the City was $980,000.

Despite the "great outpouring of support" Poff says she has received in the last week, she also knows some residents are upset about the move that could leave a huge abandoned facility in west Jackson.

"I think they see it as once again something is not being done in this area and being concentrated in a new area...," Poff said in her office.

In an interview in October 2017, the zoo's development director Trey Jones said the zoo ends up in the middle of a series of City challenges such as economic development, gentrification concerns, blight programs and generations of white flight.

"We are not the cause or the solution to all these problems," he said then. "(But), I think there's legitimate concern about why does north Jackson, everything the east side of the interstate, get all the attention?"

Poff imagines the new zoo with a restaurant where you can sit and see a giraffe passing by as you eat. She wants interactive exhibits where people can pet a rhino or feed a giraffe. But she also hopes the 54 acres left behind becomes something to benefit the community.

"Perhaps this spot can be better than what a zoo can offer," Poff said. "So that's one thing that we really want to highlight and talk with people about."

She has thrown out the idea of having a goat farm for kids to come help care for them, to develop a welding shop, a job center to teach people different skills or perhaps an urban garden. Poff sees potential in opening up new opportunities for the area.

Ivery is nowhere near as hopeful, especially because she said ZAPP was left out of discussions about moving the zoo.

"There's tons of ideas, but has someone stepped up and said, 'hey, yeah, if the zoo moves, we will make this happen'? No," Ivery said. "And in our experience here in west Jackson is that when stuff gets left, it falls apart."

Phil Reed of Voice of Calvary Ministries, also a member of ZAPP, echoed  Ivery's frustrations about being left out. He sees the move east as a setback to west Jackson's development.

"We just want to do this thing right and just be a part of the decision, and so far we haven't been," Reed said.

"I hate to be the negative voice, but we haven't been listened to so far."