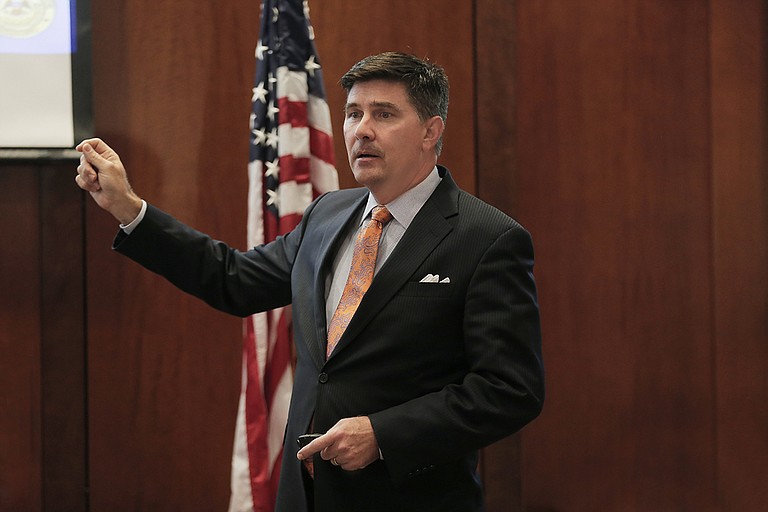 State Auditor Stacey Pickering said his office has encountered a "culture of obstruction" inside the Mississippi Department of Education. Photo by Imani Khayyam.

JACKSON — The Mississippi Department of Education may have broken state law with contracts it authorized in fiscal-year 2014 and 2015, and some of those deals with people and companies in the state superintendent's network. The allegations are part of State Auditor Stacey Pickering's unflattering compliance report of the Mississippi Department of Education released yesterday, Sept. 28, focusing on internal procurement and contracting practices, and come at the same time that MDE has proposed taking over Jackson Public Schools for being poorly run.

The Mississippi Board of Education authorized contracts back from 2013-2015 that appear to be for the same services during the same time period that, when added together, exceed the minimum threshold ($100,000 at that time) that it could approve without oversight from the Personal Service Contract Review Board. 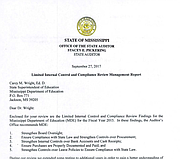 "No one could provide documentation of this approval at any level, so therefore, we have to assume and all of the facts point to the fact that the pool method is outside the bounds of state law," Pickering told reporters at the Woolfolk Building on Sept. 28.

MDE disputes this claim, however. Felicia Gavin, MDE chief operations officer, told reporters that the department has had approval from the Contract Review Board to use the "pool method" since 2009. Gavin was not at MDE during the time the contracts in question were awarded, but she said MDE provided a memo explaining PSCRB approval of the pool method to the auditor's office.

"It is my understanding that they received a copy of the same memo we have," Gavin said.

Beyond the method, Pickering also questions whether or not contracts awarded to Research in Action, DataOne Services and Blue Sky Innovations, as well as individuals who work at those companies listed by their names, were really for different services. Contracts have different numbers but seem to describe the same work.

"It appears to be very much identical work being done at the same period of time, out of the same pools," Pickering said.

One contract for $44,500 is to: "[a]ssist the MDE with providing training, piloting, and developing additional materials on SLO's as a component of the Teacher Evaluation System."

A different contract for $33,500 is to: "[a]ssist the MDE with developing SLO's and business rules as a component of the Teacher Evaluation System."

Gavin said MDE's contracts did not circumvent any laws.

"The Mississippi Department of Education has not circumvented any laws; there's nothing against entering into multiple contracts as long as the scope of work is different. If they happen to fall below a particular threshold, that's not circumventing the system," she said Thursday.

State Superintendent Carey Wright has a professional relationship with several of the contractors in questions. "What would appear on paper to be five different entities at the end of the day really winds up being two," Pickering said Sept. 28. "There's a lot of cross-breeding ... (with) these individuals on these contracts."

MDE stopped using the "pool method" for awarding contracts under the new threshold ($75,000) this May. Gavin said the Board of Education approved new policies that require the department to get two written quotes for work between $5,000 and $50,000 and three written quotes for work costing between $50,000 and $75,000. Any contract worth more than $75,000 must go to the Personal Contract Service Review Board, as state law prescribes.

"At this present time we no longer use the pool of services," Gavin said on a press call Sept. 28. "There was communication between our procurement department and the Personal Contract Service Review Board, and it was recommended that we change our procedures. ... We changed our procedures, and they were Board-approved in May."

The state auditor recommends that the Mississippi Board of Education strengthen its internal policies, noting that ultimately the responsibility for ensuring MDE follows state laws and procurement policies rests on the Board.

"If it's proven they evaded procurement laws, state law authorizes us to repudiate funds when necessary," Pickering said. "Ultimately, at the end of the day, that goes to the Board of Education: they are the ones that authorize contracts; they authorize the paying of invoices and authorize employees to enter into those contracts." The state auditor started a compliance audit of MDE after fiscal-year 2015 and fiscal-year 2016 audits produced what Pickering called "significant findings." Then MDE announced they had misspent some 21st Century federal grant funds, prompting Pickering to request more information and keep digging.

Gavin said MDE does not acknowledge any improper or wrongdoing, noting she has not read the report in full so she could not respond to specifics.

"We do not acknowledge that we've done anything improper or wrong," she said. "We have followed the guidelines of the state procurement board; we have not violated any law to our knowledge."

Gavin also echoed a press release from MDE issued this week, welcoming the auditor's office to MDE, saying the agency has been very cooperative. Pickering hoped the culture at MDE would change going forward.

"It has been a culture of obstruction: there have been roadblocks put in place consistently—it has not always been forthcoming," he said Thursday. "I saw the statement from Mississippi Department of Education, and I hope that is true as we move forward into this next phase."