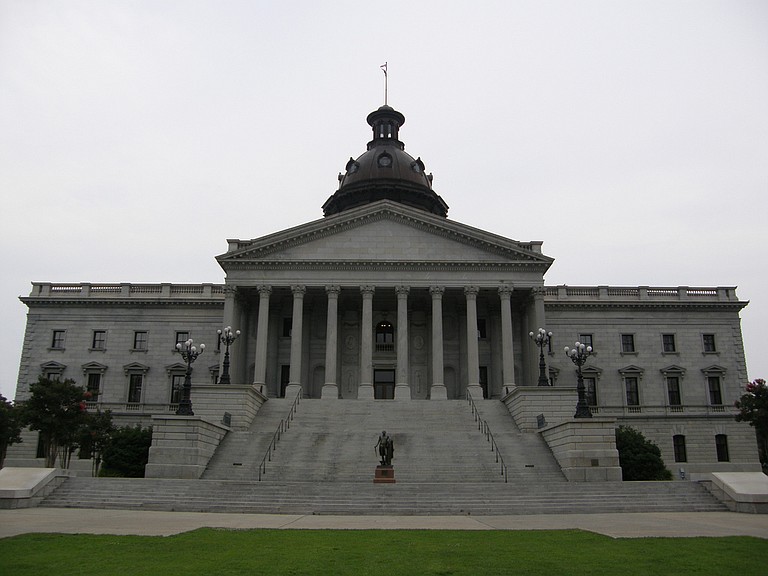 A call to honor a black Civil War hero with a monument at the South Carolina Statehouse grounds, onetime epicenter of a groundswell movement to rid communities of Confederate symbols, is being made by two lawmakers in a bid to encourage consensus-building in a nation divided by the issue. Photo courtesy Flickr/Jim Bowen

COLUMBIA, S.C. (AP) — A call to honor a black Civil War hero with a monument at the South Carolina Statehouse grounds, onetime epicenter of a groundswell movement to rid communities of Confederate symbols, is being made by two lawmakers in a bid to encourage consensus-building in a nation divided by the issue.

Two state senators—a black Democrat and a white Republican—announced their proposal Wednesday to memorialize Robert Smalls, who in 1862 hijacked a Confederate supply ship he worked on, steered his family to freedom and delivered the ammunition-laden vessel to the Union. If approved, Smalls' would be the first monument on Statehouse grounds to an individual African-American in South Carolina, which removed the Confederate flag from those grounds in 2015 after a mass shooting by an avowed white supremacist.

"Robert Smalls was both a warrior and peacemaker, both a combative and kind man who accomplished incredible feats," said Republican state Sen. Greg Gregory, who noted Smalls' titles after the war included state lawmaker and five-term congressman. "Unfortunately, few people know of this man—one of our greatest citizens—and we're seeking to change that."

Moves to strip Confederate symbols from U.S. communities by those who see them as hated symbols of racism and slavery have triggered impassioned national debate and even violence like that arising from a white nationalist protest in Charlottesville, Virginia, over a Robert E. Lee statue. Others see such symbols as proud reminders of Southern heritage and ancestors who fought in the war.

In South Carolina, a 2000 legislative compromise that took the Confederate battle flag off the Statehouse dome and put it beside a memorial on the Statehouse's front lawn also built a monument that broadly portrays centuries of African-American history in the state. That compromise also removed rebel flags from both chambers and barred altering any public monument that honors historic figures or events without overwhelming legislative approval.

Still, the Confederate flag debate was far from settled. But lawmakers of both parties refused to revisit the issue until the 2015 death of nine black parishioners at a historic Charleston church prompted them to remove the flag altogether.

Church gunman Dylann Roof, now on federal death row, was seen brandishing a Confederate flag in photographs that surfaced after his arrest.

He added the proposal is independent of calls to remove or alter other monuments around the state. He still intends to re-file a bill proposing to change the state's "Heritage Act" — the 2000 compromise — to let local leaders make their own decisions about historical monuments in their communities. But he doesn't want that wrapped into the discussion on honoring Smalls.

One Statehouse monument some have called for removing or changing is a statue of "Pitchfork" Ben Tillman, governor from 1890 to 1894 and then a U.S. senator. The inscription on Tillman's statue tells visitors he founded two universities as a "friend and leader of the common people." But it says nothing about his rise in power by the killing of black Republicans or his role in creating the Jim Crow-era of Southern segregation — white supremacy policies that Smalls opposed.

After the flag's removal, House Speaker Jay Lucas vowed there won't be any further debate on amending the Heritage Act on his watch. His spokeswoman didn't immediately respond to the senators' proposal.

House Minority Leader Todd Rutherford, D-Columbia, said a bill honoring Smalls should stand on its own.

"I think that's awesome," he said, adding he only regrets that he didn't think of it first.

Rutherford, who is black, said he recently learned all that Smalls accomplished during a visit to Beaufort County, where Smalls was born a slave and later purchased his former owner's home.

Smalls' great-great grandson, Michael B. Moore, grew up hearing his grandmother's accounts of Smalls. He noted his famous ancestor took in his former owner's wife — who had dementia and still thought the property hers — letting her occupy the master bedroom until her death.

"We happen to be in a political climate that's very partisan and where people are often at each other's throats," said Moore, of Charleston, adding Smalls' compassion on the former owner's wife was telling. "To think about Robert in the way he acknowledged the humanity of this woman and embraced her in the way he did, that's something we can all learn from."