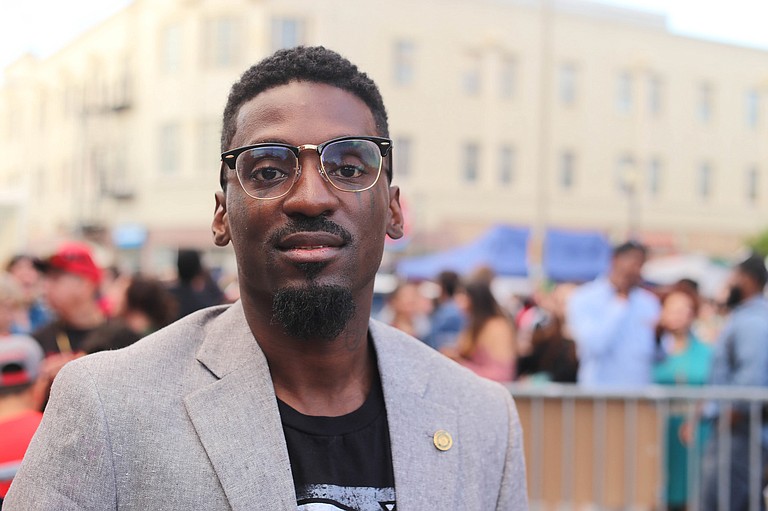 Democratic state Rep. Bruce Franks, a protest organizer, said making the entire community uncomfortable is an important part of the demonstrations. Franks said protests would continue, but he did not say when or where. Photo courtesy Flickr/Paul Sableman

ST. LOUIS (AP) — When a former police officer was acquitted in the fatal shooting of a black suspect, protesters vowed to show their disdain by disrupting business in downtown St. Louis. They quickly succeeded.

The unrest that followed Friday's ruling closed large corporate offices, shut down restaurants and bars and even forced U2 to call off a concert that would have drawn 50,000 fans into the heart of the city. And protest organizers may not be done.

The demonstrations engulfed the St. Louis region after a judge acquitted Jason Stockley of first-degree murder in the 2011 death of 24-year-old Anthony Lamar Smith. Within hours, downtown came to a standstill as marching protesters blocked traffic. The demonstrations went on through the weekend, with protest crowds swelling to thousands of people and spilling into a posh area of restaurants and bars in western St. Louis, the hip Delmar Loop area of nearby University City and even into two shopping malls.

More than 140 people were arrested.

The protests forced U2 to cancel a concert at the Edward Jones Dome, St. Louis' largest venue. Police said they could not provide normal protection because of the unrest, the band and concert promoter Live Nation said in a statement.

Singer Ed Sheeran also called off a show. The St. Louis Symphony and a Shakespearean Theatre group canceled performances too.

Democratic state Rep. Bruce Franks, a protest organizer, said making the entire community uncomfortable is an important part of the demonstrations. Franks said protests would continue, but he did not say when or where.

"Folks got to pay attention, right?" Franks said Monday. "Do we just say, 'Oh, it's another case where an officer's found not guilty and leave it at that?' No, we get out here and disrupt and make our presence felt."

Joe Reagan, president and CEO of the St. Louis Regional Chamber of Commerce, said it's too early to put a dollar amount on the economic cost.

"But in the long term, there are greater economic impacts from the racial disparity and the mistrust many have in the criminal justice system," Reagan said. "This is not new to St. Louis or unique to St. Louis, but this is a challenge."

Many business owners are dealing with more than lost time or canceled events. Police said nearly two dozen businesses were damaged Saturday night in University City, mostly by having their windows broken. On Sunday, more windows were broken in downtown St. Louis, and several large decorative pots with plants were smashed.

Chris Rubin de la Borbolla, owner of a clothing, jewelry and accessories store in University City, said his broken window will probably cost him at least $2,000. Damage to merchandise will cost him about $2,000 more.

Joe Edwards, owner of the Blueberry Hill restaurant and concert venue and many other Delmar Loop businesses, said he was particularly frustrated because much of the damage occurred at businesses owned by minorities.

"Forty-five years ago, this street was in great decline and by embracing diversity we overcame it," said Edwards, who is white. "Whoever threw rocks doesn't care. They just want anarchy."

Protests resumed for the fourth straight day just after dawn Monday. A racially mixed crowd of roughly 150 people marched silently to City Hall for a rally, then to a city court building for another. Police did not intervene.

It was a far cry from the scene hours earlier, when a small crowd left over from an earlier peaceful protest marched into downtown late Sunday. Once they started breaking windows and throwing things at officers, police reinforcements quickly emerged and protesters scattered.

For the next several hours, hundreds of officers in riot gear lined downtown streets. More than 80 people were arrested, including onlookers who refused orders to disperse. Among those arrested was reporter Mike Faulk of the St. Louis Post-Dispatch, according to the newspaper.

The cause for the escalation was not clear. Protesters blamed police for showing up in riot gear. Police said demonstrators began throwing things at them.

One officer suffered a leg injury and was taken to a hospital. His condition wasn't known.

"I'm proud to tell you the city of St. Louis is safe and the police owned tonight," interim Police Chief Lawrence O'Toole said in an early morning video posted on Twitter.

The Sunday night unrest followed a pattern familiar since the protests in nearby Ferguson, Missouri, in 2014, following the fatal police shooting of Michael Brown. Raucous but peaceful protests dominate during the daytime and early evening, giving way to much small but more confrontational demonstrations at night.

"The days have been calm and the nights have been destructive," Mayor Lyda Krewson said as she stood with O'Toole on the Twitter video.