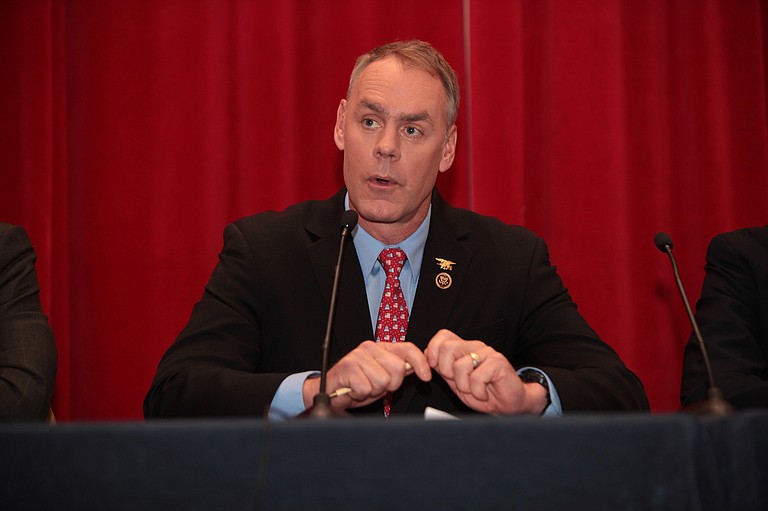 Interior Secretary Ryan Zinke is recommending that four large national monuments in the West be reduced in size, potentially opening up hundreds of thousand or even millions of acres of land revered for natural beauty and historical significance to mining, logging and other development. Photo courtesy Flickr/Gage Skidmore

WASHINGTON (AP) — Interior Secretary Ryan Zinke is recommending that four large national monuments in the West be reduced in size, potentially opening up hundreds of thousand or even millions of acres of land revered for natural beauty and historical significance to mining, logging and other development.

Zinke's recommendation, revealed in a leaked memo submitted to the White House, prompted an outcry from environmental groups who promised to take the Trump administration to court to block the moves.

The Interior secretary's plan would scale back two huge Utah monuments — Bears Ears and Grand Staircase-Escalante — along with Nevada's Gold Butte and Oregon's Cascade-Siskiyou. More logging and other development also would be allowed at three other monuments — two in in New Mexico and one in Maine.

Bears Ears, designated for federal protection by former President Barack Obama, totals 1.3 million acres in southeastern Utah on land that is sacred to Native Americans and home to tens of thousands of archaeological sites, including ancient cliff dwellings. Grand Staircase-Escalante, in southern Utah, includes nearly 1.9 million acres in a sweeping vista larger than the state of Delaware.

Grand Staircase has been a source of ire for local officials and Republican leaders for more than two decades amid complaints that its 1996 designation as a monument by former President Bill Clinton closed off too much land to development.

Two marine monuments in the Pacific Ocean also would be reduced under Zinke's memo, which has not been officially released. The Associated Press obtained a copy of the memo.

President Donald Trump ordered the review earlier this year after complaining about a "massive land grab" by Obama and other former presidents.

National monument designations add protections for lands known for their natural beauty with the goal of preserving them for future generations. The restrictions aren't as stringent as for national parks, but some policies include limits on mining, timber cutting and recreational activities such as riding off-road vehicles.

No president has tried to eliminate a monument, but some have trimmed and redrawn boundaries 18 times, according to the National Park Service.

Zinke's recommendations to pare down the four Western monuments — and allow more logging and other development in three other monuments — "represent an unprecedented assault on our parks and public lands" by the Trump administration, said Jamie Williams, president of the Wilderness Society.

"This callous proposal will needlessly punish local, predominantly rural communities that depend on parks and public lands for outdoor recreation, sustainable jobs and economic growth," Williams said, vowing to challenge in court any actions by the Trump administration to reduce the size of national monuments.

Zinke has declined to say whether portions of any monuments under review would be opened up to oil and gas drilling, mining, logging and other industries for which Trump has advocated.

It was not clear from the memo how much energy development would be allowed on the sites recommended for changes, although the memo cites "active timber management" as a goal, as well as increased public access.

A spokeswoman for Zinke referred questions to the White House, which said in a statement that it does not comment on leaked documents.

If Trump adopts the recommendations, it would quiet some of the worst fears of his opponents, who warned that vast public lands and marine areas could be lost to states or private interests.

But significant reductions in the size of the monuments, especially those created by Obama, would mark the latest in a string of actions where Trump has sought to erode his Democratic predecessor's legacy.

The recommendations cap an unprecedented four-month review based on Trump's claim that the century-old Antiquities Act had been misused by past presidents to create oversized monuments that hinder energy development, grazing and other uses.