State Board Sends JPS Takeover to Governor for Stamp of Approval 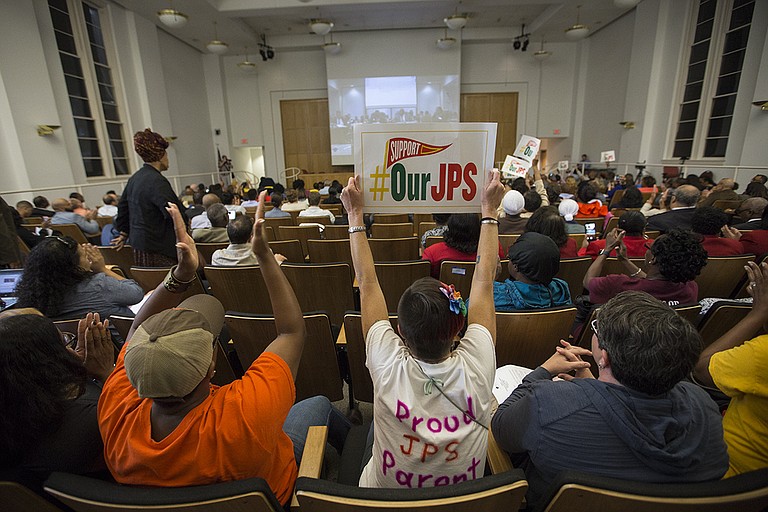 Parents and advocates who oppose the state takeover of Jackson Public Schools watched the State Board of Education meeting from the second-floor auditorium on Thursday; JPS supporters cheered when Interim Superintendent Freddrick Murray asked the board to not declare an “emergency.” Photo by Imani Khayyam.

JACKSON — The fate of Jackson Public Schools is now in the hands of Republican Gov. Phil Bryant after the Mississippi Board of Education declared an “extreme emergency situation” in the district this afternoon. The eight-member board did not vote publicly on the decision, however, and Chairwoman Rosemary Aultman read a printed-out resolution with its declaration after two hours in executive session.

The board named the current conservator in the Tunica County School District, Dr. Margie Pulley, as the interim superintendent of the district and said it would send the resolution to the governor for his approval.

The board chairwoman gave no reasoning for the board’s decision, except to reporters later—and she only read the resolution before the board took a recess for the room to clear. If the governor signs the board’s resolution, he will abolish the JPS district, transfer power to Pulley and make the same board that voted them into “emergency” status the district’s school board, as state law provides.

Aultman later told reporters that the vote was 5-2, with Charles McClelland and Johnny Franklin voting no. Aultman did not vote because she only has to vote in the event of a tie.

The State Board of Education added the JPS “emergency” decision to its agenda swiftly this morning, moving it up in the meeting to get to it quickly. After honoring a few teachers, the body dove into the issue.

The better part of the morning was déjà vu from what occurred in the same fourth-floor meeting room a day before. The Mississippi Department of Education got 40 minutes to make its case, then JPS got 40 minutes, then state board members could ask questions. The same people sat in the audience: district officials, the JPS School Board of Trustees and Interim Superintendent Freddrick Murray. Jackson Mayor Chokwe Antar Lumumba sat in for a little while.

The slideshows were similar enough, but the tone of MDE’s presentation had softened tremendously since the day before. The seemingly agitated and urgent tone MDE Chief of Accountability Paula Vanderford used in Wednesday’s meeting appeared to dissipate in front of the State Board on Thursday. Similarly, JPS Interim Superintendent Freddrick Murray, while making essentially the same presentation, seemed less anxious. As Murray spoke, JPS supporters sitting in the second-floor auditorium cheered and reacted to his presentation.

The state board, at first, appeared to have no questions. There was a pause, lasting long enough to show that several of them did not intend to speak on the impending state takeover of the second-largest district in the state. (Desoto County is the largest.)

Only two board members asked questions: the one Jackson representative on the board, Charles McClelland, and Dr. John Kelly of Gulfport. The question-answer period lasted a little more than 20 minutes. Sitting at the same desk, Vanderford and Murray showed little tension today—a stark contrast to Wednesday, when they had to share a mic for a short time as they accused the other of presenting inaccurate information.

The same attorneys made their closing arguments before the state board. James Keith, hired by JPS, gave a slightly altered version of his Wednesday remarks. Keith asked the board for 30 days to adequately respond to the MDE investigative audit, which was just released Aug. 31.

“Why doesn’t this board tell MDE to go back to JPS to see which one of these standards they can clear?” Keith said, alluding to the differing sets of data presented both parties presented. “There’s the proof in the pudding. Before you make the vote to take over, I think that’s the simplest thing we could do to make sure we don’t make a major mistake.”

Keith stressed that the commission’s decision was arbitrary, because it was based on only MDE’s audit, not JPS’ response, which the state board received today.

“(The Commission) did not look at our evidence,” Keith told the board “… Yesterday, they did not, other than thumbing through the (binders), look at our information; that is an arbitrary decision, that is not fair to this school district.”

Later, Keith’s comment was remembered at least for posterity’s sake, as board members took both the MDE audit binders and JPS response binders with them out of the room for executive session.

MDE counsel Erin Meyer returned to give MDE’s closing argument, and she started her remarks with a breaking-news bomb alert.

“Just for transparency’s sake, I want to bring something to the board’s attention since there’s been this argument and dispute about the 30 days,” Meyer said. “This morning the district (JPS) attempted to seek a motion for a temporary restraining order. The court—the Hinds County Chancery Court—denied that temporary restraining order, based on that same argument about insufficient time.”

Keith stood up from his chair.

“I’m going to object,” he said. “That is not what the judge ruled. The judge ruled he did not have jurisdiction to rule on that issue. That is a misstatement. What was just said—”

Meyer just continued with her response, moving right along.

She did not raise her voice on Thursday, however, but presented the prepared remarks in an even tone. Instead of ending her remarks with Winston Churchill like she had for the Commission on Wednesday, she opted for a well-known African leader instead.

“Nelson Mandela said, ‘Education is the most powerful weapon we can use to change the world,” she told the board. She then added, “Failure to act will have a disastrous impact on the lives of students in JPS.”

From Behind Closed Doors

The board went to lunch for an hour, then returned with Jason Dean offering a motion, which seemed prepared, for the board to go into executive session.

Board members returned after the assembled JPS supporters waited for two painful hours. The room went silent as Aultman read from a piece of paper, which contained the board’s resolution, drafted behind closed doors. Three JPS school-board members sat in the front row, as did Rep. Jarvis Dortch, D-Jackson and Sen. Sollie Norwood, D-Jackson.

“The state Board of Education finds the following: The board finds that there is sufficient cause to believe that an extreme emergency situation exists in the Jackson Public School District brought on by serious findings related to serious violations of accreditation standards, federal and state law, failure to sustain a safe school climate,” she read from the resolution.

After that proclamation, Aultman also announced that the Board approved Dr. Pulley as the interim superintendent.

The room let out a low rumble. JPS Board Member Jed Oppenheim got up and left. Murray was still in the room when to hear the name of his replacement if Gov. Bryant signs the resolution.

JPS Board members, Jackson City Council members and Jackson lawmakers expressed their discontent at not only the decision but also the process the Board took to come to their decision.

“Yes, we’ve got some challenges, but I guarantee you that you can go to any school in any school district, and you can find these very same challenges,” Sen. Norwood told reporters outside the MDE headquarters in the old Central High School. “… To name an (new) interim superintendent with the interim superintendent (Murray) in the room? That’s absolutely disrespectful.”

Ward 2 Councilman Melvin Priester Jr. said the City plans to reach out to the governor to see what next steps are, but did not rule out a lawsuit. “We intend to look for every legal option to stop this decision,” he said.

Jackson-based attorney Dorsey Carson, who is a JPS parent, said the courts seem to be the next option. “We’re going to fight for our kids, and at this point, it looks like we will have to go to the court system, so we will do what any parent will do to protect their children,” Carson said outside MDE Thursday.

Carson expressed his disapproval of the audit process, saying parents and children did not have a voice in the audit nor were they interviewed as a part of the MDE investigation.

“This is all about administration and takeover for profit,” he said. 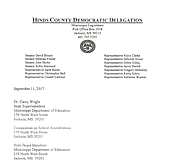 Now Up to Gov. Bryant

Nothing changes in the district for now, and it’s up to Gov. Phil Bryant to sign the resolution from the State Board of Education. If he does, the new interim superintendent takes over, and the Mississippi Board of Education will govern the district. Technically, JPS has not lost its accreditation as a district—yet. The Commission on School Accreditation can vote on it at its October meeting, Vanderford told reporters.

If the district’s accreditation is withdrawn, Vanderford said extracurricular activities would stay in place for at least a year.

More critically, if JPS loses its accreditation, parents may apply for transfers to different accredited school districts, which those district school boards must approve.

Gov. Bryant is out of the country, Aultman told reporters this afternoon, and she was unsure when he might sign the resolution.

Correction: A previous version of this story listed Mississippi Board of Education member Charles McClelland's first name as Michael in one instance. We apologize for the error.

Email state reporter Arielle Dreher at [email protected]; for tweets and videos from the meeting, see @arielle_amara on Twitter.