Takeover of Jackson Schools Moves on to State School Board 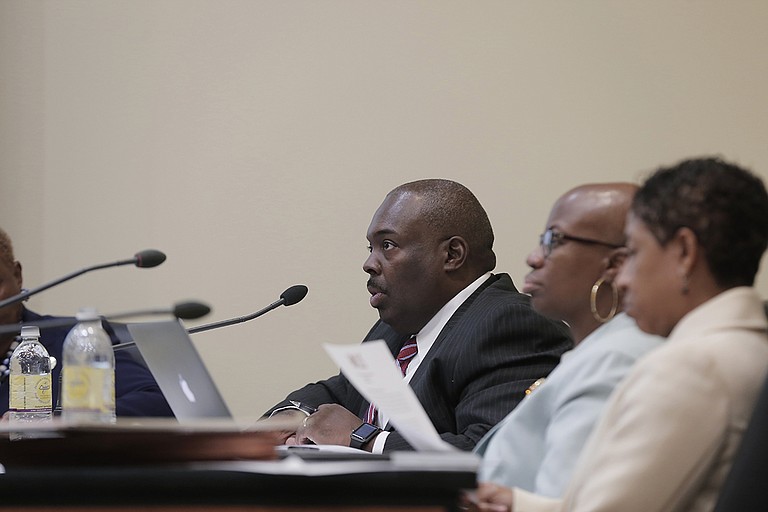 Interim Superintendent Freddrick Murray argues that some state allegations are false and others have been addressed. He and others argue Jackson should get more time to complete remaining fixes. Photo by Imani Khayyam.

JACKSON, Miss. (AP) — Mississippi's second-largest school district remains on a path to be taken over by the state.

The state School Accreditation Commission voted Wednesday that the state Board of Education and Gov. Phil Bryant should declare an emergency in the 27,000-student Jackson district.

The Board of Education is scheduled to take up the issue Thursday.

The 10-1 vote came after an hourslong hearing when state Department of Education officials told commission members that the district had key failings. Allegations against the district include seniors graduating without showing they met requirements, teachers providing ineffective instruction and schools bring unsafe.

"At no point did the district demonstrate a sense of urgency to remedy deficiencies," said Paula Vanderford, chief accountability officer for the Department of Education.

Interim Superintendent Freddrick Murray argues that some state allegations are false and others have been addressed. He and others argue Jackson should get more time to complete remaining fixes.

"I believe we have a significant amount of work to do, but what we've done in seven months is probably more than what was done in seven years," Murray said.

If the Jackson district is taken over, it could have a long stay under state control. A law enacted earlier this year by the Legislature suggests that any district with an academic rating of D or F should achieve a C rating for five consecutive years before the state returns it to local control.

The Mississippi Department of Education has, in the past, struggled to improve academic performance in districts it takes over, although officials have suggested recent takeovers in Aberdeen and Tunica County have showed better results.

Unlike in the past, a takeover would not affect athletic and other extracurricular activities. They eventually could be limited if state officials were to return later and revoke the district's accreditation.

Jackson was on the verge of being taken over in 2012 because of special education violations, but the commission voted to give the district more time to fix problems.

Wednesday's vote came at the end of a long process of state oversight, which began with a limited investigative audit in 2016. After that inquiry found numerous violations, the accreditation commission put Jackson on probation and ordered an audit of all schools. The district fired its previous superintendent and started working to correct problems. But Murray argues that trying to correct problems while the state was looking for more violations makes work difficult.

"It's akin to us building a house and having the final inspection done while we're building the house," Murray said.

The audit found that:

— New middle school and high school lesson plans written for the district by a contractor didn't include needed information or plans to help students, and weren't followed by teachers.

— In 16 schools, some classes visited by inspectors had no teaching going on, while students were so unruly in other classes that teachers couldn't control them.

— Teachers were often lecturing or handing out worksheets instead of tailoring teaching to each student's needs.

Murray said many of the problems had been rectified but the department had not returned to inspect the corrections. He and Vanderford particularly disagreed over the question of whether the district allowed ineligible seniors to graduate in May. Murray, although he wouldn't guarantee that no ineligible seniors had graduated, said the department's numbers sharply disagreed with district counts.

Vanderford also argued that test scores showed academic performance in the district is sinking lower, with four high schools and 17 elementary schools among the lowest 10 percent in the state. Department lawyer Erin Meyer said preliminary results show Jackson will be rated F for the second time this year. District lawyer Jim Keith objected to the disclosure.