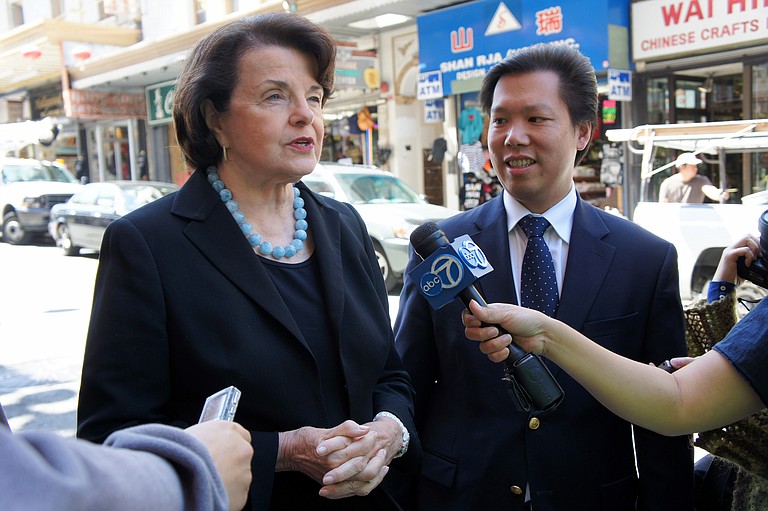 Sen. Dianne Feinstein (left), D-Calif., told Amy Coney Barrett that dogma and law are two different things and she was concerned "that the dogma lives loudly within you." Photo courtesy Flickr/David Lee

WASHINGTON (AP) — Roman Catholic leaders are objecting to Democratic senators' line of questioning for one of President Donald Trump's judicial nominees, arguing the focus on her faith is misplaced and runs counter to the Constitution's prohibition on religious tests for political office.

The outcry stems from the questioning last week of Amy Coney Barrett, a Notre Dame law professor tapped to serve on the U.S. Court of Appeals for the Seventh Circuit. Democrats focused on whether her personal views would override her legal judgment, especially with respect to the landmark 1973 Supreme Court decision legalizing abortion.

Sen. Dianne Feinstein, D-Calif., told Barrett that dogma and law are two different things and she was concerned "that the dogma lives loudly within you."

Feinstein's statement upset Notre Dame's president, the Rev. John I. Jenkins, who wrote a letter this past weekend to the senator and the Judiciary Committee, calling the questioning "chilling."

The United States Conference of Catholic Bishops also weighed in.

"People of faith, whatever faith they may hold, should not be disqualified because of that faith from serving the public good," said Archbishop William E. Lori, chairman of the organization's committee on religious liberty.

The uproar underscored the volatile mix of religion, politics and the law, with Democrats worried Trump judicial nominees, once seated on the courts, will reverse abortion rights. Democrats changed the Senate rules in 2013 to a simple majority to ensure confirmation of the president's nominees, which now leaves Democrats with little recourse to stop Trump's picks. Beyond the Senate political fight, the dispute carries echoes of the 1960 campaign when some voters feared that Catholic candidate John F. Kennedy would take orders from the pope if elected president.

"It is chilling to hear from a United States Senator that this might now disqualify someone from service as a federal judge," Jenkins wrote. "I ask you and your colleagues to respect those in whom 'dogma lives loudly' — which is a condition we call faith. For the attempt to live such faith while one respects the legal system should command respect, not evoke concern."

Jenkins said that Barrett made it clear that she would "follow unflinchingly" all court precedent and, in rare cases in which her conscience would not allow her to do so, she would recuse herself.

The Alliance for Justice counters that federal judges don't get to pick and choose which cases they will hear or which issues they address. Laurie Kinney, a spokeswoman for the group, said that a judge recusing themselves from a case because of their conscience is "the definition of putting faith ahead of the law, in our view."