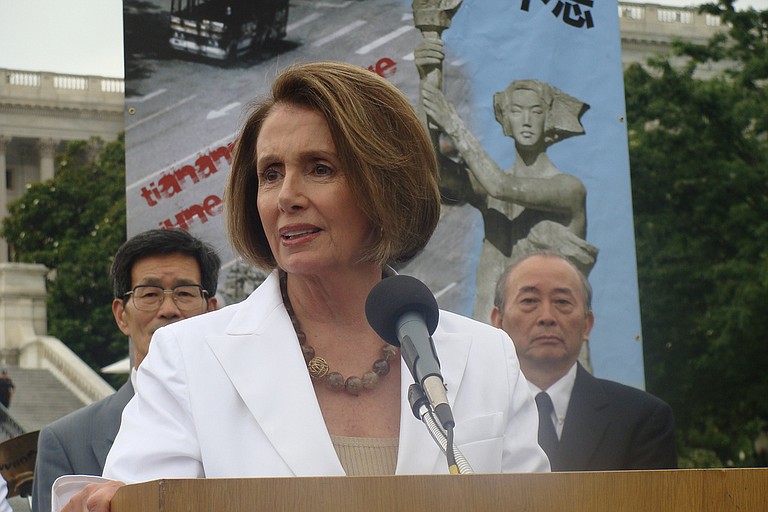 House Minority Leader Nancy Pelosi predicted on Friday that Democrats will have increased leverage on immigration and other issues, after a debt and disaster aid deal they cut with President Donald Trump passed the House on the strength of Democratic votes. Photo courtesy Flickr/Nancy Pelosi

WASHINGTON (AP) — House Minority Leader Nancy Pelosi predicted on Friday that Democrats will have increased leverage on immigration and other issues, after a debt and disaster aid deal they cut with President Donald Trump passed the House on the strength of Democratic votes.

Pelosi said she makes "no apology" for working across the aisle with a president disdained in her home state of California, arguing that the president now understands Democrats are committed to compromise, "but also to stand our ground."

The package of Harvey aid money coupled with a short-term increase in the debt ceiling and government spending passed Friday 316-90, with all 90 "no" votes coming from Republicans. Pelosi said that vote suggests Republicans are going to have a hard time passing other upcoming spending bills on their own, and will have to turn to Democrats again.

"If it's depending on Democratic votes, it increases our leverage," Pelosi said in an interview with a small group of reporters. "It gives us a possibility for passing the DREAM Act" as an amendment to spending legislation.

The DREAM Act refers to legislation that would provide legal status to immigrants brought illegally to the country as children. Some 800,000 of these immigrants are currently protected from deportation by temporary work permits granted by an Obama administration program, but Trump has said he will dismantle it. He has given Congress six months to act before the program ends.

At Pelosi's urging, Trump sent a tweet Thursday morning reassuring so-called "Dreamers" that they would not be subject to deportation during that six-month period.

Pelosi discussed her conversation with Trump precipitating the tweet. She said that after a discussion with Democratic lawmakers about fears in the immigrant community, she had planned to call White House Chief of Staff John Kelly Thursday morning to talk about it.

Trump called her first; aides have previously said one purpose was to boast about positive news coverage of the debt deal struck the day before in the Oval Office over GOP objections.

But Pelosi launched into the topic of immigration, telling Trump: "'I'm so glad you called because this is the challenge that we have. I know you did not mean to instill fear, but that is what is happening.'"

"'Well what can I do?'" the president asked, according to Pelosi.

Sure enough, no sooner did Pelosi get off the phone and head into a meeting with fellow Democrats where she began recounting her call with the president, the tweet appeared: "For all of those (DACA) that are concerned about your status during the 6 month period, you have nothing to worry about - No action!"

Asked her takeaway from that exchange, Pelosi said: "We have to always assume that people are acting with love in their heart. I'm a big believer in that, until they prove differently to me you have to believe it. And I don't know if the president fully, I don't know if he understood how cruel that act was," she said, referring to the decision to end the immigration program.

Pelosi said Democrats had the leverage because Republicans didn't have the votes to pass the longer extension they wanted on their own. She said Trump quickly grasped that.

"The president has been in a business where knowing your numbers has been essential," Pelosi said. "He saw that they didn't have the votes; we had a plan."

She said voters expect lawmakers and the president to work together.

"We have a responsibility to get something done for the American people," Pelosi said. "I make no apology for trying to do that with the person who's going to sign the bill."