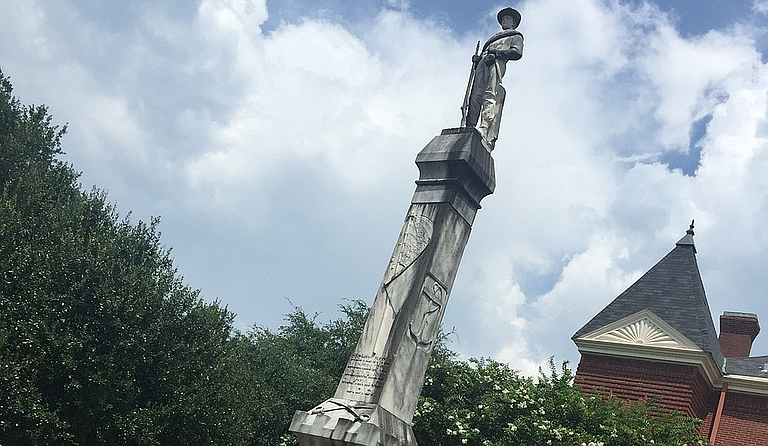 Confederate monuments have come under increased scrutiny in the U.S. in recent months. Photo by Donna Ladd.

OXFORD, Miss. (AP) — Another Confederate monument is sparking debate in Mississippi between critics who see it as a symbol of racial oppression and supporters who say it pays tribute to history.

Local residents expressed opinions to Lafayette County supervisors during a public meeting Tuesday, The Oxford Eagle reported. Supervisors did not vote on whether to remove the Confederate soldier statue that has stood since 1907 outside the county courthouse in the center of the town square in Oxford.

Confederate monuments are under increasing scrutiny across the South, including other parts of Mississippi.

Effie Burt of Oxford said her grandparents' family was run out of Lafayette County decades ago because one of her relatives refused to take orders from a white man.

"I think we should put Confederate monuments into a museum where they can be appreciated by those who feel they were not oppressed like how I feel I was with my family," Burt said. "I think we need a change and if we're going to move forward, we can't keep in the past."

Danny Toma, an Oxford resident who supports the monument, said the area was devastated by the Civil War.

"That monument was put up for those boys from Lafayette County who died doing their duty as they saw fit," Toma said. "They were defending their homes and many were not slave holders. They felt their homes were under invasion."

Local residents in at least two other Mississippi counties, Leflore and Attala, have asked supervisors to remove Confederate monuments that sit on public property. Attala County supervisors met Tuesday but did not discuss a request they heard last month.

Officials in McComb are expected to consider moving a Confederate monument that has stood outside City Hall since 1916. While many Mississippi cities and counties have statues of Confederate soldiers, the monument in McComb is an upright slab with benches on two sides.