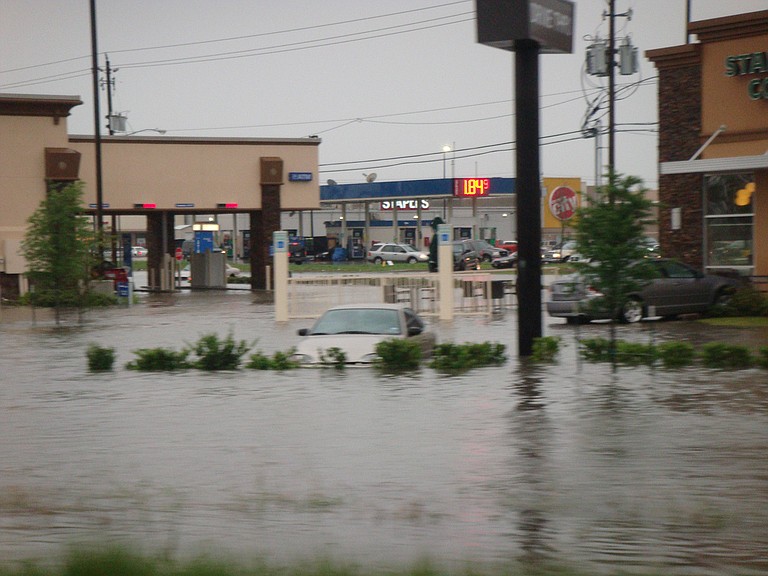 Gasoline prices are rising as the flooding from Harvey knocked out refineries and ports, but rebuilding efforts in the coming months could provide a stimulative benefit. Photo courtesy Flickr/Todd Dwyer

WASHINGTON (AP) — U.S. job growth slowed in August as employers added 156,000 jobs, still enough to suggest that most businesses remain confident in an economy now in its ninth year of recovery from the Great Recession.

The unemployment rate ticked up from 4.3 percent to a still-low 4.4 percent, the Labor Department said Friday. The government also revised down its estimate of job growth in June and July by a combined 41,000, leaving an average monthly gain this year of a solid 176,000.

Taken as a whole, Friday's jobs report pointed to an economy that is still steadily generating jobs, though at a less brisk pace than it did earlier in the recovery from the recession. With fewer people looking for work, fewer jobs are being filled. In addition, monthly jobs reports can be volatile — especially figures for August, when employers are gearing up for the start of fall and the government can't always precisely factor the changes into its employment data.

"It's more noise than signal," Joe Brusuelas, chief economist at tax consultant RSM, said of Friday's report. "Focus on the longer-term trend of growth in employment."

One persistent soft spot in the job market is pay raises, which remain tepid. Average hourly pay rose just 2.5 percent over the 12 months that ended in August. Wage growth typically averages 3.5 percent to 4 percent annually when unemployment is this low.

The economy has grown at a subpar annual pace of 2.1 percent during the first six months of 2017. Still, the August jobs report comes as Americans have grown more optimistic. A measure of consumer confidence in August hit its highest level in 16 years, the Conference Board said this week.

Inflation is low. Consumer spending in July rose at its fastest pace in three months. The stock market is up 10 percent so far this year. One measure of factory orders suggests that business investment is increasing.

Even the traumatic damage caused by Hurricane Harvey around the Houston region may not break the national economy's stride. Gasoline prices are rising as the flooding from Harvey knocked out refineries and ports, but rebuilding efforts in the coming months could provide a stimulative benefit.

Gus Faucher, chief economist at PNC Financial, predicts that job growth in the coming months "will weaken substantially" in the wake of Harvey, only to rebound quickly as workers who were temporarily laid off are rehired.

The August jobs report showed that roughly the same proportion of people last month as in July either had a job or were looking for one. Anyone not actively looking for a job isn't considered part of the labor force and isn't counted as unemployed. This so-called labor force participation rate held at 62.9 percent.

The participation rate has tumbled from 66 percent over the past decade, but the decline reflects in part an aging U.S. population that is retiring. Some economists say that in light of that trend, a stable participation rate is a positive sign for the economy.

The leading source of job growth last month was manufacturing, which added 36,000. An additional 28,000 jobs came from construction and 20,200 from the health care sector. By contrast, governments shed 9,000 jobs.