Most Texans Kneel During Anthem After Owner's Comments 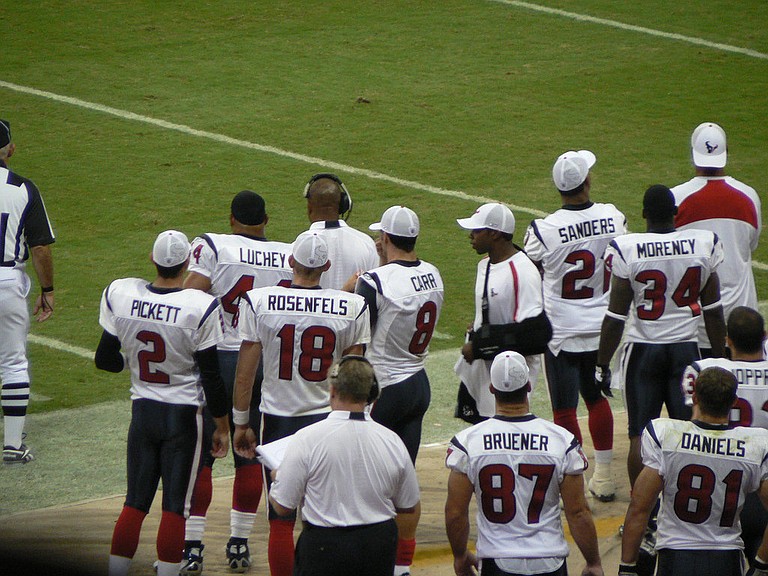 All but 10 members of the Houston Texans took a knee during the national anthem Sunday, as the vast majority of the team protested the owner's "inmates running the prison" comment. Photo courtesy Flickr/Rick Kimpel

SEATTLE (AP) — All but 10 members of the Houston Texans took a knee during the national anthem Sunday, as the vast majority of the team protested the owner's "inmates running the prison" comment.

The Texans had indicated there would be some type of protest following the comments by owner Bob McNair. It came prior to the Texans' wild 41-38 loss to the Seattle Seahawks.

"I'm never going to force anyone to do anything they don't feel comfortable with. I think we all felt the same way on Friday," said Houston left tackle Duane Brown. "As far as the demonstration went, some people didn't feel quite comfortable (kneeling) and some people did, but we all supported each other. That was what was important. I don't think that anyone looks at anyone differently for what they stood for or didn't stand for."

All of the team's black players appeared to take a knee. At least one white player — Ben Heeney — also knelt.

It was the first time the Texans had participated in a protest this season that included players kneeling during the anthem. The Texans stood with their arms locked before kickoff on Sept. 24 in New England, the weekend when 200 players around the league protested following President Donald Trump's criticism.

McNair issued two apologies attempting to explain his comments after a story in ESPN The Magazine revealed that he said "we can't have the inmates running the prison" during a meeting of NFL owners about players protests.

Brown said McNair met with the players but that it went "not too well."

"But we blocked out all distractions and came out here ready to play," Brown said.

The entire team took the field about 10 minutes before kickoff. When the anthem started the majority of the active roster (approximately 36 players) took a knee. Houston coach Bill O'Brien said he had meetings with his leadership committee and was in support of his players actions.

DeAndre Hopkins was among the players kneeling on Sunday. Hopkins was excused from practice on Friday following the release of McNair's comments. When asked about why he did not practice on Friday, Hopkins responded that the "Seahawks played a great game," but later was more introspective about his decisions.

"I've been through a lot in life so nothing really, words, is going to stop me from going out and performing on the field," Hopkins said.

Hopkins had the second-best game of his career on Sunday with 224 yards receiving.

"I play football for a living. I don't get into political things," he said. "So what I did there on the field, that's what I do for a living."

Rookie QB Deshaun Watson, who had the best game of his young career throwing for 402 yards and four TDs, declined to comment about McNair and said he was impressed by the mental toughness shown by his team this week.

The majority of Seattle's defensive line continued to sit as it has for most of the season.