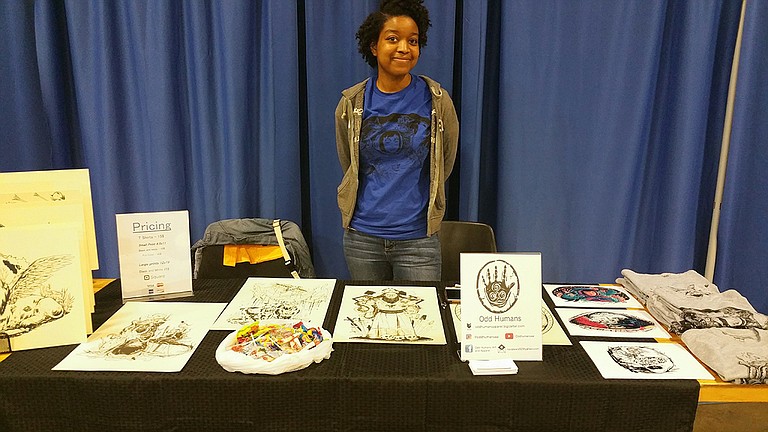 Odd Humans Art & Apparel creator Reva Lewis' designs draw from a variety of themes, with influences of horror and the macabre, nature and science fiction present in many of her pieces.

Some drawings may conjure up feelings of nostalgia in some when Williams draws characters such as E.T. Some of her other designs include a zombie Stormtrooper and tentacle monster-attack scene.

"I'm inspired by a myriad of my favorite artists from different mediums including tattoos, illustrators, muralist and pretty much anyone that created their own style," she says. "My goal is to create my own signature aesthetic while telling my story cohesively. It can get dark and a little weird at times."

Williams, 24, says that a couple of years ago, she was looking for a project to start and discovered screen-printing.

"I was initially on the path to being an animator," she says. "When I was younger, I loved cartoons and loved the potential for countless ideas and stories. It was what I always drew. I really didn't know any other field in art at the time also. I quickly realized that it was too tedious for me, however."

She started as an art major at Jackson State University in 2014. However in 2015, she decided that her talents could be put to better use working on her art rather than being in the classroom, so she left the university.

"I wasn't learning much more than I already knew, so I started doing my own thing," she says. "That's when I saw the most growth."

Williams has sold her products at conventions and also sells her products in businesses such as Offbeat. She has plans of expanding her brand in the near future and hopes to build a larger fan base, particularly here in the capital city and surrounding areas.

Her artwork and designs also appear on several types of mediums beside just prints, including skateboard  decks and T-shirts.

"I ... like my art to be used in a few different ways: skateboards, T-shirts, movie and gig posters, murals or any other product that it will look good  on," she says.