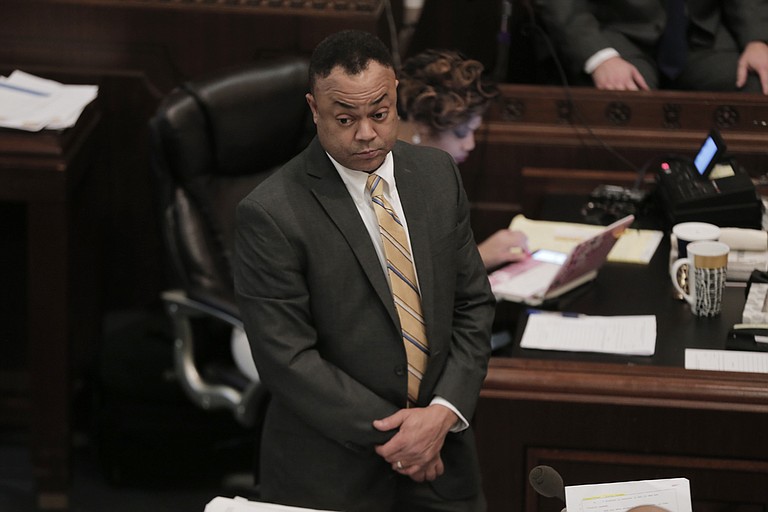 If no further delays occur, Hinds County District Attorney Robert Shuler Smith is facing domestic-violence charges in Rankin County next week during a tough time in the country for powerful men accused of abuse. Photo by Imani Khayyam.

JACKSON — The timing could not be worse for Hinds County District Attorney Robert Shuler Smith's new trial in Rankin County. His trial for charges of aggravated stalking, robbery, and two counts of domestic violence, all involving an ex-girlfriend, is slated to start next week during a time in the country where powerful men abusing women is a hot topic and during Domestic Violence Awareness Month.

In the last year, Smith has avoided a conviction in two trials for hindering prosecution in Hinds County that would have forced him from office as the area's top prosecutor, and probably gotten him disbarred. In the first trial, the jury could not reach a verdict, and then he was acquitted in a Hinds County courtroom—downstairs from his own office.

Smith beat those charges, which the Mississippi attorney general's office brought, by arguing that he was trying to ensure justice for a man indicted for stockpiling a large amount of marijuana in his home. The man was also accused of wire fraud in a separate case. That man, Christopher Butler, is now in prison for 30 years. Smith was acquitted for trying to help him.

The State also originally accused the Hinds DA of trying to keep Donald "Darnell" Turner, who also goes by Dixon, out of jail on charges that he beat, threatened, pulled a gun on and dangled his ex-girlfriend off a bridge in the Washington Addition. The State later dropped the Turner case from Smith's indictment, but successfully prosecuted Turner in September in Hinds County. He is now serving 45 years in prison.

The Turner case is more akin to the charges the State brought against Smith in Rankin County, where the DA's immediate family owns homes and property, and where the attorney general is accusing the Hinds district attorney of stalking and physically abusing his long-time girlfriend, Christie Edwards, and brandishing a gun at her.

Both sides filed court documents showing that Smith's attorneys are fighting to keep potentially damaging testimony by a domestic-abuse shelter director, a witness and another former girlfriend out of that trial, which is set to start as early as Oct. 30. The documents indicate that the State will likely claim that the alleged domestic violence was a pattern. The state will also allege drug abuse by the county's top elected prosecutor.

The trial was due to begin the week of Oct. 16, but Judge John Emfinger gave Smith at least a temporary reprieve until the week of Oct. 30 to allow him time to argue that the Mississippi Supreme Court should block the trial with an interlocutory appeal—which means that the high court would appeal Smith's charges before he has to go through a trial. His attorney, John Reeves, argued in his petition that Smith would suffer damage to his reputation if the trial went forward.

Answer to Petition for Interlocutory Appeal by Permission

Smith asked the Mississippi Supreme Court to block the attorney general from prosecuting this case against him. Smith maintains that attorney generals need explicit permission from district attorneys when prosecuting cases in their jurisdiction based on the 2014 Mississippi Supreme Court case, Williams v. State, which involved Smith. In the Williams case, handled by Smith in his capacity as Hinds County district attorney, Smith was asked to recuse himself so that the attorney generals who had originally handled the Williams case could prosecute it after Smith issued an order of "nolle prosequi" (not prosecuting) not to re-try Williams.

However, Rankin County District Attorney Michael Guest told Judge Emfinger that he did not object to the AG prosecuting Smith in his jurisdiction and that the State often tries cases there. The AG's office believes that Smith's case is "clearly distinguishable" from the Williams case.

The Mississippi Supreme Court rejected Smith's appeal without explanation on Oct. 18. Emfinger is still considering whether to block damaging evidence involving prior alleged domestic violence and Smith's potential drug use from the jury.

The domestic-violence incident for which Smith is being charged took place on Aug. 13, 2015, in Rankin County. Court documents show that Smith and his counsel want to keep any abuse allegations predating this alleged incident out of the trial proceedings because of "danger of unfair prejudice" and "hearsay."

Guest previously testified at a hearing on Oct. 2 in Judge Emfinger's courtroom that the alleged victim told him that the "event" occurred on Smith family property in Rankin County. Smith routinely uses his parents' home in west Jackson in legal documents as his home address.

Smith's counsel wants to bar any mention of a telephone call the alleged victim made to Smith on Aug. 20, 2015, because "this information is irrelevant." He also asked for conversations between the alleged victim and the FBI about prior abuse to be omitted from trial, citing hearsay and prejudice because they find such statements to be unnecessary when "the alleged victim is available to testify at trial."

Assistant Attorney General Stanley Alexander noted in a supplemental response to the court that FBI agents will be called to testify about the reports they filed when the victim came to them and said she "feared for her life."

"Because of this fear, the victim was given $2,000.00 by the Bureau so that she could leave town for her safety," Alexander wrote to the court.

Smith also wants to bar any mention or reference to any photographs that staff at the domestic-violence shelter took of the alleged victim because "these photographs would be highly prejudicial." In addition, the DA wants to block testimony by the alleged victim's father regarding Smith removing a pistol from the her residence.

Attorney John Reeves did not respond to the JFP's attempts to make contact before press time. Emfinger will hear final motions on Oct. 30, and the trial's earliest start date should be Oct. 31.

Email city/county reporter Ko Bragg at [email protected]. Read more on cases the State has brought against the Hinds DA at jfp.ms/dafiles. Subscribe to jfpdaily.com free for trial updates.