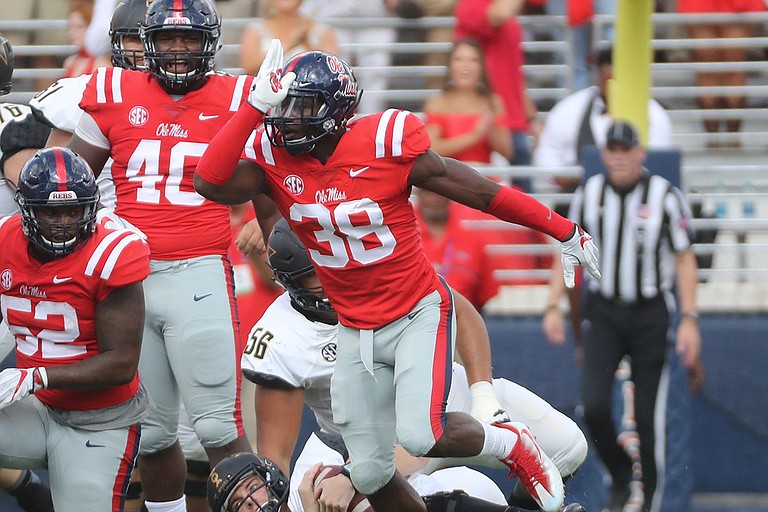 The Vanderbilt University offensive line could not do much against University of Mississippi defensive end Marquis Haynes on Saturday, Oct. 14. The Jacksonville, Fla., native lived in the Commodores' backfield on nearly every offensive snap.

Haynes wreaked havoc on the Commodores during UM's 57-35 win, recording 3.5 tackles for a loss and three sacks. The senior now owns the modern school records for both statistics. His 29 career sacks passed Greg Hardy for one record, and his 43 career tackles for a loss passed Derrick Burgess for a second record.

During Saturday's game against Vanderbilt, Haynes also had eight tackles, which is one shy of his personal game high. He forced two fumbles against the Commodores, as well, and one of those fumbles came off a sack, which led to him recording a safety at the start of the third quarter.

Haynes' big day against Vanderbilt earned him the honor of SEC Co-Defensive Line Player of the Week. His teammate, quarterback Shea Patterson, was the SEC Co-Offensive Player of the Week after he threw for five touchdowns against the Commodores. Haynes and Patterson helped the Rebels break a three-game losing streak and gave the team a much-needed homecoming win.

Haynes came to UM as a three-star recruit after leading University Christian School in Jacksonville to the Florida 2A State Championship in his senior year. He originally committed to the University of North Carolina at Chapel Hill before switching to the Rebels.

As a college freshman in 2014, Haynes played in 13 games with four starts and had 31 total tackles, 17 solo tackles, nine tackles for a loss, three forced fumbles, two defended passes and one fumble recovery. His 7.5 sacks set a school record for a freshman. Various media outlets named him Freshman All-American, and conference coaches named him All-SEC Freshman. He also earned the title of SEC Freshman of the Week that season against the University of Tennessee.

Haynes had no sophomore slump in 2015 and improved nearly all of the statistics from his freshman season. He had 43 total tackles, 29 solo tackles, 16.5 tackles for a loss, 10 sacks, three forced fumbles, two defended passes and one fumble recovery, and played in all 13 games that season. The defensive end was an SEC Defensive Lineman of the Week three times, and multiple media outlets named him Second-Team All-SEC.

Last season, Haynes kept up his high level of play, and he started in all 12 games. He had 53 total tackles, 29 solo tackles, 11 tackles for a loss, seven sacks, three forced fumbles, three defended passes, one interception and one fumble recovery. His play earned him Third-Team All-SEC honors from Phil Steele and Athlon.

In his three-and-a-half seasons with the Rebels, Haynes has played in 44 games at defensive end. He has made 154 total tackles, 90 solo tackles, 43 tackles for a loss, 29 sacks, 11 forced fumbles, three fumble recoveries and one interception, along with seven passes defended.

The Rebels will try to start a winning streak this weekend on Saturday, Oct. 21, as they host Louisiana State University, whcih ESPN will broadcast at 6:15 p.m.