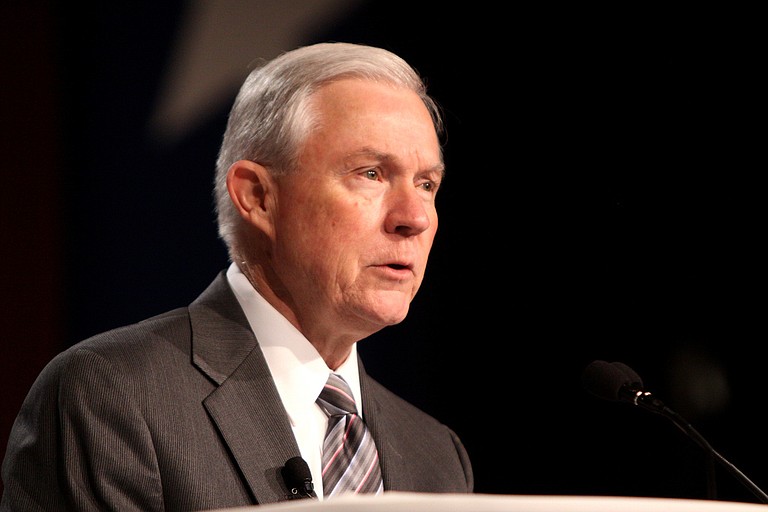 Sessions, appearing before the Senate Judiciary Committee, said it was "the first time I'm aware of" in which an FBI director had performed the traditional role of Justice Department prosecutors by announcing on his own the conclusion of a federal investigation — that no charges would be brought against Clinton. Photo courtesy Flickr/Gage Skidmore

WASHINGTON (AP) — Attorney General Jeff Sessions strongly defended President Donald Trump's firing of James Comey, but at a Senate hearing Wednesday repeatedly declined to discuss private conversations with the president about the dismissal, frustrating Democratic lawmakers who wanted to link the firing of the FBI director to a broader inquiry into Russian election meddling.

The repeated, often-testy questioning about the Russia investigation, coming even as Sessions spearheads sweeping changes to the Justice Department in the areas of LGBT rights, criminal justice and immigration, illustrates the extent to which the probe continues to shadow Sessions even though he recused himself months ago.

Sessions advised the Senate Judiciary Committee at the outset of his first oversight hearing as attorney general that he would not answer any questions about conversations with the president that he considered confidential.

He largely adhered to that principle during the five-hour hearing, refusing to say what Trump told him about his reasons for wanting to fire Comey, whether Trump confided in him his concern about "lifting the cloud" of the Russia investigation and whether he had asked him to drop a criminal case against Sheriff Joe Arpaio in Arizona.

Sessions deflected the questions by maintaining that presidents are entitled to have private discussions with Cabinet secretaries, saying at one point, "I do not confirm or deny the existence of any communication between the president that I consider to be confidential."

Still, Sessions' defense of the Comey firing — and his insistence that it stemmed from the handling of the Hillary Clinton email case — was consistent with the initial explanation by the White House. It was, he said, "the first time I'm aware of" in which an FBI director had performed the traditional role of Justice Department prosecutors by announcing on his own the conclusion of a federal investigation — that no charges would be brought against Clinton.

He said he was further galled when Comey, shortly before his firing, insisted to Congress that he would have taken the same actions again.

"That was a fairly stunning event for both of us and it did highlight the problem more significantly than it had been before," Sessions said, referring to Deputy Attorney General Rosenstein.

Though he refused to say whether he discussed with Trump Comey's involvement in the Russia investigation, he did say that the president had asked him and Rosenstein for their recommendations about what to do with Comey.

But that explanation has been muddled by Trump himself, who days after the May 9 firing said he would have fired Comey even without the Justice Department's recommendation and that he was thinking of "this Russia thing" when he dismissed him.

The circumstances of Comey's firing are among many events being investigated by Robert Mueller, who was appointed as the Justice Department's special counsel to look into whether the Trump campaign coordinated with Russia to influence the outcome of the 2016 election.

After initially balking at the question, Sessions said Mueller's team had not interviewed him as part of its investigation.

The hearing marked a return to the Judiciary Committee for Sessions, who served on it for years as a Republican senator. Yet his interactions with his former peers have been frayed as attorney general, particularly amid Democratic accusations that he provided misleading testimony at his confirmation hearing about his contacts with the Russian ambassador.

He bickered with Sen. Al Franken, a Minnesota Democrat, who accused him of having moved the "goalpost" in his denials about his contacts with the ambassador.

He said that while Sessions had initially denied having any contacts with Russians during the campaign, he later qualified his answer to say that he had not discussed any matters related to the campaign. Sessions repeated Wednesday that he had done nothing improper and had given a "good-faith" response.

Apart from Russia, Sessions faced questions from lawmakers about his swift undoing of Obama-era protections for gay and transgender people and his rollback of criminal justice policies that aimed to reduce the federal prison population, among other changes he has made in the nine months since taking office.

Franken praised his decision to send an experienced federal hate crimes prosecutor to assist in a transgender murder case in Iowa, but said his Justice Department has "demonstrated an unrelenting hostility toward LGBT people," an assertion Sessions disputed.

Sessions has tried to pressure so-called sanctuary cities into cooperating with federal immigration authorities by threatening to withhold grant money, and he was the public face of the Trump administration's decision to end a program benefiting hundreds of thousands of young people who entered the U.S. illegally as children. Congress is seeking a legislative solution to extend the protections before recipients' work permits expire.

He tussled with Democratic Sen. Dick Durbin of Illinois over whether people living in the country illegally are driving Chicago's gun violence. The city has been in the Trump administration's crosshairs for refusing to help immigration authorities detain and deport immigrants. Durbin said he wanted Chicago officers doing community policing and not immigration work.

"How does that make the city of Chicago safer when you don't remove criminals who are illegally in the country?" Sessions said.

It is standard policy for attorneys general to appear before the Justice Department's congressional overseers on the House and Senate judiciary committees.

Yet, in a reflection of the extent to which the Russia investigation and his own role as a Trump campaign ally have dominated public attention, Sessions first appeared months ago before the Senate Intelligence Committee, which is conducting its own probe of election meddling.